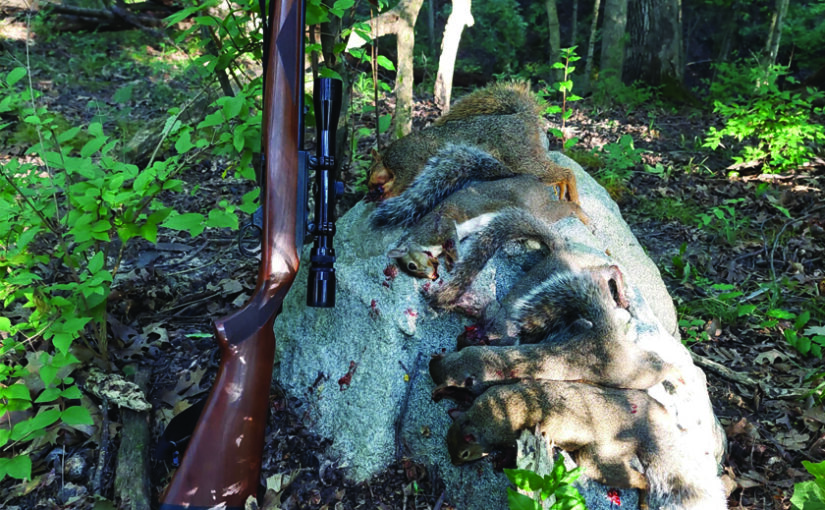 Always seen as a gateway to the coming seasons, squirrel hunting has provided the first activity kicking off the anticipation of the fall and winter to come.  As a young boy and later teen-ager. providing the rewards of a successful hunt to my dear old Grandmother, Esther Herschelman, and her brother Jesse Schmitz for table fare provided a sense of family, food and income although the fifty-cents per squirrel was not much, it did buy a pack of one-hundred twenty-two caliber bullets for inventory.  Those early memories will forever be cherished!

Later in life, this same activity was accomplished in giving the results of my hunting acuity to Mabel and Chuck Knuth whose small acreage and home bordered my farm in Schuyler County IL.  Both well into their eighties, were kindhearted and religious individuals who enjoyed the visit and wild game provided.  Both are now gone to their well-deserved eternal reward.

The love of the pursuit of the bushy-tail is still pervasive but the loss of those individuals visited after the hunt reminds one of your limited existences on this earth.   The crisp morning air, the sound of Hickory Nuts being cut with resultant pieces of nut hitting the ground after the being ground by the Squirrels incisors is part of the ritual of the fall in my opinion!

Finally, the weather gave a less than sultry day optimum for entry into the woods.  The walk along the banks of Lake Shelbyville was made more difficult as the low water levels had provided ample areas for vegetation to grow and the morning dew had made the plants waterlogged.  From mid-thigh on down my pants were soaked.  Although I should have walked the high ground to my intended destination, the wet pants reminded of my youthful years trudging through the growing beans and vegetation to the wood lots of my youth to hunt.

Immediately upon arriving to my secret grove of Hickory Trees, the sounds of the little critters cutting on nuts was noticed!  Time after time the intended targets would move from securing ripened nuts back to a suitable perch to gorge on their cache, but yours truly was not quick enough to find their spot despite the raining bits of hickory nuts giving away their location.  Frustration creeped in as moving squirrels usually after a full belly moved on to other areas!  Stay put. Opportunities will come I told myself.

Sure enough, the shot chances began to flourish!  Despite aging eyesight and hearing and the other tell – tale signs of old age, my selected shots with the rifle resting against the trunk of a tree suitable for such purposes began to connect!  Despite success – no movement was made with the intention of allowing the bushytails to resume their feeding despite the crack of the rifle shots within their feasting perimeter.  This formula began to work as the feeding continued until my limit was acquired, although one clear miss was recorded, my other shots were true, and my passing grade would allow the pursuit of further hunts before retiring from this sport!

After a few pictures, the bag was cleaned and made ready for transport.  Gone are the days of ninety second skinning and gut removal as the fear of the sharp knife used by old hands required a slower pace.   The sun began to heat up the wooded section as the trek out of the area progressed.  The cooler at the truck was utilized to transport my success and the air-conditioned environment within the cab of my old truck was welcomed during the trip back to my home.

New adventures will surely come this fall and winter.  This short trip to the squirrel woods with some success is the starting point of the seasons to come and the first test had been passed allowing continuance on to the deer stand, duck blind, dove stand etc.  Despite the medical issues slowing my body and mind over the last few months – the confidence acquired during this short hunt confirmed the rocking chair on the front porch will remain empty for now!