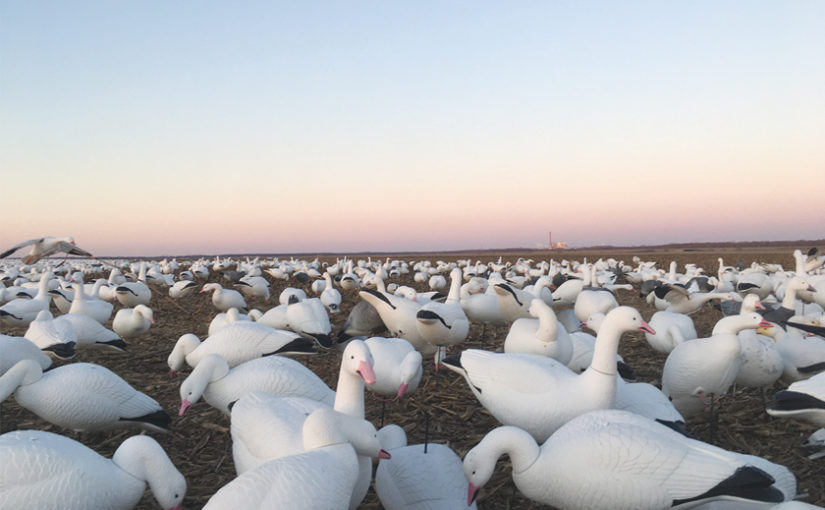 Old man winter keeps hanging on here in the Midwest and I don’t know about you, but cabin fever is in full force. With hunting season being over and its too cold for me to get the boat out I have been trying to find things to do until the weather breaks. When I was making all of my deliveries for March I noticed a large number of Snow Geese all over Central and Southern Illinois. I thought to myself now there is something I have never done. I have never been snow goose hunting and if there was a time to go it was now. One of our advertisers Show Me Your Snows is known to be one of the best Snow Goose Hunting Outfitters around. So, I called the owner, Rick Hamm to see if he had any open dates. To my surprise he had a couple of openings on Friday March 2nd.  I called my good friend Al to see if he could get the day off of work to join me on this new adventure. As the day grew closer my anticipation was at an all time high. I just couldn’t imagine what it would be like to have 100’s of birds coming into your spread and waiting for those two amazing words. Take ‘em. Now after talking with Rick, I knew this was going to be a long day. We had to meet them at 5:00am and head to the pit. This meant getting up and 3am and picking up Al to head to our meeting destination. When we arrived, there were several hunters waiting in anticipation just like we were. We had our sack lunch, plenty of coffee and snacks and we were set for a day of adventure. Since this was my first time I really didn’t know what to expect. When we arrived at the pit all I could see was decoys. I have seen some pretty good size spreads in my day but nothing of this magnitude. There were over 10,000 decoys set in this field and it was really a site to see. You couldn’t even walk through them because they were so tightly packed in. As the day began, we didn’t have much wind which doesn’t help with movement, but they had every gadget you could imagine attracting even the wariest of birds. As we sat in the pit, we started seeing good numbers of Snow Geese. Some were flying miles high and I remember Rick saying that those were migrators and would work down from that high of distance. As we sat there we began to see a large number of birds that were miles high start working down to the decoys. We must have watched these birds for over 45 minutes as they made there way down towards our spread. As they got closer and closer I could feel my heart beating a little faster. Not knowing what to expect with 10 hunters in the pit with many of them having extended tubes to be able to shoot 10 shells at a time. As they made their last round towards the decoys Rick said “get ready we will take them on this pass”. These birds were coming in at 20 yards and the sight was what dreams were made of. All of the anticipation had come down to this. Rick made the call and I must say, when the shells started ringing out, the birds were dropping like flies. The first volley was an eye opener. So many shots going off is such a short amount of time kind of startled me and I only got off a couple of shots. After that experience I realized when its time to take them get up and unload on whatever was still flying. So, after the first round I was ready to give this another shot. After watching birds for another hour we began to have another group work the decoys and when they made their last pass we were ready. Once again, the sky was raining Snows. It is something out of a TV show! I have watched many Snow Geese hunting shows over the last few years, but nothing is quite like watching them rain out of the sky. As the birds came down you could hear them crunching the decoys. I can’t imagine how many decoys get destroyed by the missiles that were coming out of the sky. What an experience! As the day went on we had a group here and there that would work our decoys and it seemed every time we had a group come in there was 8 to 12 birds falling out the sky. It was quite the adventure and I am sure I will give it another go in the future. We ended up with around 30 birds for the day and we heard from some other pits that Rick has. One pit had around 50 and the other 60. That is a pretty good hunt if you ask me. I know they have days where they harvest hundreds out of each pit. I can’t even imagine how much shooting that is. Especially if you have an extended magazine and you are shooting 10 shells every time. It was a great time and I was able to meet some great people in the process. If you ever get a chance to give this a shot give Rick Hamm a call.  Show Me Your Snows and he will show you a great time hunting over more decoys than I can afford. His number is 309-635-5200.

With that adventure over it was time to concentrate on finding some sheds and learning more about our deer herd. I feel that shed hunting allows me to see places that I normally wouldn’t even discover. After the snow melts it is easy to find the paths that the deer have been using since last fall. As I travel these trails I always learn something new about the property. I find new bedding areas and old rub lines that I never knew existed in the fall. In the fall I don’t like to go walking around the whole property because I am always scared to push the deer off the property. So, I use the spring to analyze where I will put up new stands and determine how to get into those stands without being detected. This time of year, to me is the best to make a plan for the following season. Of course, my ultimate goal is to find one of the sheds from the many deer I have had on camera for the last several months. Since many people were finding sheds in February my times in the field were less fruitful so I decided to wait until most of the deer had lost their antlers and in our area that seem to be the end of February through the first week of March. This is also a great time to get the dog out and let her do a little running. Since getting her fixed late last summer she has put on a few pounds and I need to get her out and running before she gets too heavy. Plus when I leave, she drives the wife nuts because she knows when I put on the camo that something is up and she wants to go. If I don’t take her, she whines the entire time and drives Leah crazy. So, in order to keep her from driving everyone nuts it was time she came along for the ride. Besides she retrieves and hunts everything else so let’s make her a shed dog as well. As we began our shed hunt we walked for a couple of hours with no luck. Then we came upon a bedding area where you could see the deer have been bedding in recent weeks. Sure, enough there was a small set of antlers laying 5 feet from each other.  Of course, my friend Al was giving me crap because he has never found a shed and it seems I find a few every year and usually a couple of dead heads as well. So, I told him to go ahead and search the area, there may be more around. After searching for a few minutes, we didn’t see anything, so I told him to go ahead and maybe he would find the next set. As he began to walk away my phone rang so I took the call. After the call was complete I started to follow where Al had gone. I took maybe 10 steps and I could see another antler sticking out of the weeds. It was pretty chewed up but was a really nice antler, so I retrieved it and rubbed it in Al’s face like any friend would do. We wouldn’t find anymore sheds that day, but I will be heading back out in a few days to see what I can find.

One thing I do recommend if you are taking your dog make sure you have a first aid kit in case something would happen. Last fall I had the scare of my life. I love my dog Cocoa just as much as a family member. Leah calls her my furry wife. We were out checking ditches and making sure we didn’t have any beaver issues when Cocoa somehow found a snare that someone had set and had it around her neck. It was the most helpless feeling I have ever had. I was trying to keep her from making the snare tighter and she was fighting me the whole way. I completely panicked and all I could think was she is dying and I can’t do anything about it. I was practically in tears thinking I am watching my dogs last breath. Luckily, my friend Tim ran to the four-wheeler and had a pair of wire cutters but if you have ever used snares you know that they are made to withstand wire cutters. As Tim struggled to break the snare I saw Cocoa basically run out of air and just lay down. Her fight was almost over and then all the sudden Tim was able to break through the snare and free her. With a deep gasp she jumped to her feet with a look on her face like “what the heck just happened”. Needless to say, after that experience I always carry a pair of good wire cutters just in case. If I hadn’t of been right there with her it would have been a different ending and not one I want to think about. So, when you take your faithful companion to the woods please make sure that everyone has pulled their traps and be prepared for the worst-case scenario. I know trappers are very responsible but there is always that chance that a snare has been forgotten.