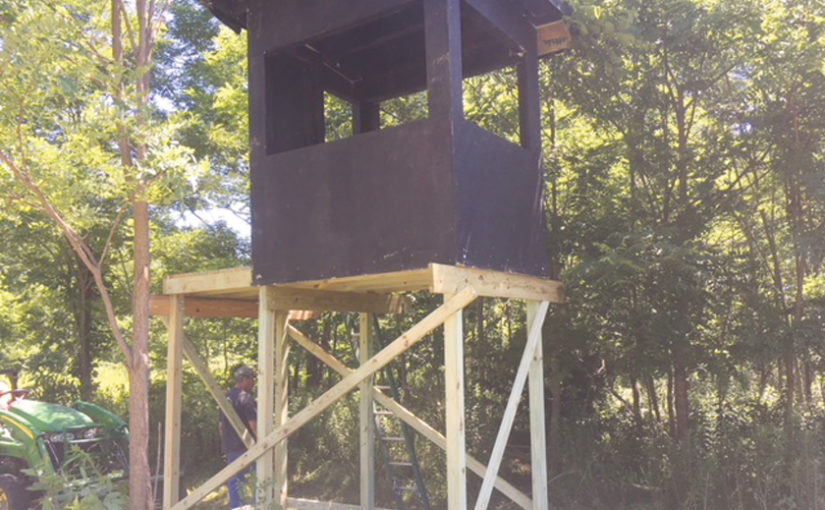 It is hard to believe that July is almost over. The summer seems to be flying by and all I am thinking about is vacation and catching some crappie. There was a lot of things to get accomplished before the end of July.

First: I had to get a blind built for deer hunting with my baby girl. I really wanted a nice safe stand where we would be out of the weather and not as high up as most stands. Over the last several years many of my friends have built this type of blind and it does come in really handy when it is raining or snowing or just too cold and windy to be up in a tree. This stand will put Ella and I eight feet in the air with nice large windows for her to harvest her first deer. One thing is for sure, this is not a cheap investment, but if It’s for Ella I can seem to justify it.

Last year she broke her foot the last week in October and because we didn’t have this type of blind to get her into we would have to sit on the ground and it just wouldn’t work. We did try a ground blind once or twice, but we just couldn’t be where the deer traveled. So, this year I am determined to put her in the right place to harvest her first deer. I have never been so excited for deer season in my life. Most of my excitement is because of Ella’s excitement. She is ready to help supply her family with meat for the year. She tells everyone about her crossbow and how she can hit the bullseye better that dad and unfortunately, I must admit she is not wrong. Several times we have competed at 50 yards to see who would get closer to the bullseye and the first two times she hit almost dead on. Talk about a proud father moment. Now I just must keep her head from getting too big as she loves to tell everyone the story.

Our blind will be 5-foot-wide by 6-foot long. It will be set up to walk up one side with a small porch and enter the door. We are going to primer everything and add a coat of flat black to the entire blind to help with protection and also help conceal our silhouette. We will have curtains to adjust in the windows, so we options to close or open as needed. This should be something that will last many years and it will make me feel a lot better in the future when Ella begins hunting on her own and this will be her go to spot.

Even before getting this blind built and heading to vacation at the end of the month I have one other item that is a must before anything else. That is taking my yearly trip to Rutledge, Missouri with my grandparents. They have been such an integral part of my life and really are a big reason I am who I am today. Grandpa is now 94 and grandma is 86 so it isn’t as easy for them to get around as it used to be. Of course, Ella wanted to make this trip with me and there is nothing I wanted more than for Ella to spend as much time with them as we can.

As we decided to head to Missouri on Monday July 2nd our trip began at 7:30am. We loaded the truck and off we headed to this little Amish community in Missouri. I am sure many people have heard of Rutledge Missouri because of the large flee market that takes place the 2nd weekend of the month. When I was 8 and 9 years old grandpa and I would go down to this sale and camp out for the weekend. Back then they would sell coon dogs and guns and all kinds of things. There was a small flee market at the time which now my understanding it is nothing, but a giant flee market. They obviously no longer sale dogs or guns at auction. We had a lot of fun back then. I had a little Honda 50 motorcycle that I would take down with me and wreak havoc on the trails. I always had plenty of kids to play with.

The only issue I had was my grandpa was kind of cheap. So, what he would have me do is go collect soda bottles and turn them in for ten cents each. I remember I had to get enough to pay for our breakfast which was $2.20 a piece. I would spend a couple of hours looking around until I found our breakfast money for the next day. At the time I didn’t like what he had me do but now I look back on it he just made me earn a little money and know that you have to work to eat. That may not have been in his mind but that is what I take from it now.

I always remember grandpa telling me stories about his adventure to the auctions each month. He had several friends that would go with him and on occasion my dad made the trip. During our trip this time grandpa told me a story of when him one of his friends Glenn Siefert and my dad went to Rutledge for the weekend. It seemed every time my dad went there was always a problem or something would happen. Well on this trip nothing major happened and they were on their way home. Glenn was a smoker and he was smoking a cigarette on the way home and threw it out the window. A few minutes later they see flames coming from the back for the truck. Glenn pulls the truck over and grandpa and dad are laughing at Glenn because his coat was on fire. After getting the flames out Glenn looks into the truck and there was my dads new coat. It had caught fire and burned holes in his coat as well. Dad stopped laughing after that. Of course, if you could hear my grandpa giggle when he tells this story it would make you laugh until you cried. He is so ornery. I am sure he is where I get my orneriness from.

There were several stories about his time in the Philippines during the war, unfortunately I probably shouldn’t tell them yet. I really enjoy spending the time with them and talking about old times and how things used to be. As we returned home there was one last stop I wanted to make. I haven’t been back to the farm in a couple of years. It is hard for me to go back there. So many great memories of days I spent with my grandparents on their farm. Getting up every morning at 5:00am to the smell of bacon cooking and knowing It’s time to get up and eat and go do chores. Those are days that you just can never replace. There were many days spent building fences, baling hay and straw and taking care of all of the animals. It taught me a lot about hard work and how to survive off of the land.

As we were getting close to the farm my grandma pointed out where her grandmother lived and where her uncle lived. Ella thought this was the best thing since sliced bread. So far, she has told everyone who would listen about where her great- great grandmother lived and other relatives from the past.  As we pulled up the farm I must admit my heart sank. There was no garden where there used to be. The chicken coup was no longer, one of the garages was gone, no dog kennels, apple trees were all dead and the house was sitting empty. The only thing that remained was the small garage where my mother had been raised, the big barn, the house they build in the 70’s and of course the outhouse everything else was gone.

The house was sitting empty with the doors open so my curiosity got the best of me. I just peaked in the window to see how things had changed. The first thing I notice is the same curtains are still in the windows. Looking around I realized not a lot has changed over the last five or six years and it just hurt to see that sitting empty. As time goes by you just have to keep all of the great memories close to your heart because things change over time and we just have to learn to deal with it. The remaining ride home was a somber ride for me. My grandparents were on that farm for more than 70 years. I always thought that someday I would buy the farm and build a house on a hill overlooking the Big Creek Valley. I named this hill when I was a young kid. For some reason when I went there for the first time I called it Honeymoon Hill. It had two majestic oak trees that sit on the very top of the hill and everything around it for many acres was a hay field. You could see the bottoms for what seemed like miles.  I miss that hill and I hope to someday pay it a visit.

After our Missouri adventure it was time to start canning. The first thing I do each year in early July is my homemade strawberry jam. I have three strawberry boxes in my back yard and I was hoping to get enough to do at least 12 to 20 jars of strawberry jam. That didn’t happen this year. It seems the cold spring didn’t help my plants much, so I purchased a couple of 5-pound bags while I was in Missouri. If your family loves jam than this is something you should consider. I usually only have around $30 in the jam and that will give me up to 20 jars for the year. We go through a lot of jam plus I enjoy giving it away to family and friends. Usually once they have tried it they are asking for more.

All it takes is a little time. I love teaching Ella the things that I have been taught by my mother and grandmother. It is very important to teach your kids how to live and thrive off what they grow and harvest. God forbid we ever have to live our life like that but for many generations that is how the world was. Now canning and preserving your own food is a lost art. I understand that if you think about all of the time you put into a garden and the time spent processing and preserving it there may not be much of a savings. The way I look at it is: I know where most of my food is grown and processed. With all for the ingredients used to preserve food these days I feel it is worth your health to at least supply some of the food you consume each year. I know not everything I eat will be grown out of my garden, but I do know that we eat a lost less food with all of those preservatives. After getting some strawberry jam and blackberry jam completed it will soon be time for tomatoes, green beans, spaghetti sauce and tomato juice. It does take a lot of time but if you’re looking to teach your kids a life skill it is well worth the time and effort. Everyone should know how to plant a garden, keep it healthy and preserve your food for future use.