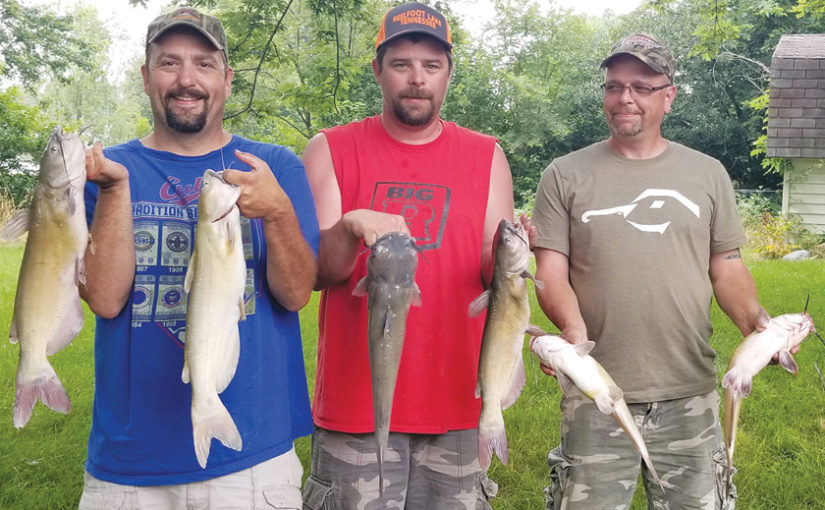 Well I am not sure where the summer is going but it seems to be going fast. My wife and I have been waiting to get on the river to do a little catfishing and up until a few weeks ago the river was just too flooded for us to go forth. There finally came a time that I just couldn’t take it anymore. I have my annual fish fry in a couple of months, and I need some catfish to go with the crappie. Last year in July we were catching 20 plus fish per trip and having the best catfishing season I have ever had. With the water levels still high we needed to try a different approach then our normal fishing haunts. We have a few spots when the river is normal pool you can just go set your anchor and not move all day. Every 15 to 30 minutes you will at least have a bite if not reeling one in. I have really never fished the river when it was flooded but I do know that if the water is up in the trees and its spawning time, you can bet the catfish will be wriggling their way through the trees and swimming through brush piles. As we started off the day, it was a normal morning as I once again forgot to fill the boat up with gas. I try to keep it low while traveling and of course the next time I go out after a long trip, I somehow forget the dang boat needs gas to run. Oh well it gives my wife something to get on me about. She has been stranded with me more than once, so she is used to it. As we arrived to our fishing hole, the normal depth is usually around 12 to 14 feet where we fish but that was now 18- 20 feet of water. As we scanned the bottom with sonar trying to find a group of fish, I realized we just have to get up by the trees and see what happens. As we anchored the boat close to the trees, we began putting our poles out and before we could even get everyone in the water, we had a fish on. This was a good sign to start the day!  One nice 5lb 6oz catfish and we were on the board. We would catch a few in each spot then move down to the next set of tree stumps or brush piles and in most locations, we would catch a few right off the bat then wait for a while and catch a few more. It was a great morning, but the sun started to peak out mid-morning the temperature added with the sun and no breeze the sweating began. We fished for a few more hours and decided it was time to call it a day. We caught 16 catfish in our boat and a buddy of mine Brandon caught 16 that day as well so 32 fish in a morning outing wasn’t too bad and the best thing about it was, I am frying up some whole catfish tonight.

After a couple of weeks, I wanted to go catfishing at least one more time before vacation. I started calling my friends to see who would like to spend the day on the water fishing. Of course, most of them were up to go so we took two boats. Al and Bob Schackow would be in their boat and Brandon, Tim and I would be in my boat. Not saying there is a competition but if I am involved that is usually how I see it. Al and Bob arrived first so on our way out and yes, I did get gas this time, we headed to a honey hole Brandon was in a couple of weeks before. To our chagrin there sat Al and Bob just chuckling like a couple of little kids who have had too much candy. The game was on we set off for the trees and away we went. The water was up a little from a few weeks ago and the fishing just didn’t seem as good at first. We caught a couple over the first few hours as we moved from place to place looking for that magical spot. We would catch a couple here and there and then we finally settled into a spot and we started catching them fairly regularly. Before we knew it we had over 20 fish in the boat and were thinking about leaving. We decided to stick it out until 12:30pm then head in to clean fish and enjoy a Sunday afternoon. We continued to catch fish right up until it was time to go. Once we finished and arrived back at the ramp, we counted the fish. We kept 28 catfish ranging from a pound to around 6lbs. It was a great day spent with my friends on the water. Of course, Al and Bob weren’t ready to head in so they are fishing a few more hours and ended up with 21 catfish. In the two boats we caught 49 catfish. Pretty good considering the amount of flooded areas these fish could be hiding. Now we should have enough catfish for the fish fry, just need a few more crappie and the feast will be on.

As summer is coming to an end there is something, I would like each and every one of us to do and that is take a kid fishing. So many kids are wrapped up in their cell phone and electronics that they don’t get out into the great outdoors to experience what Mother Nature has to offer. The opportunities for kids in the outdoors are unlimited. Getting a kid involved in the outdoors is our number one goal as outdoorsman. If we don’t teach the future generations how to enjoy the outdoors, then we have failed as outdoorsman. This doesn’t mean you make your kid go fishing every time you go but always ask and I always tell my daughter that I want to spend some quality time with her doing what I love. She usually goes three or four times a year fishing and many times hunting. We have found that she really enjoys hunting more than fishing and that is ok with me. I just want her to spend time in the outdoors in order to enjoy everything god has created. So the next time you think about heading in the outdoors, ask a kid to a tag along with you. It will make your experience even more enjoyable watching them enjoy it as much as you do.

One thing that I have noticed over the last couple of years is how people tend to take the resources for granted. If you fish the same lakes time and time again and keep every fish you catch, you are not being environmentally conscious. I see people take way too many small fish with them and then always wonder why they can’t catch any decent fish out of that lake anymore. I have one particular lake that we fish once or twice a year and we usually only keep bluegill and a couple of crappies. However, I have noticed many of the others that fish this lake will keep everything they catch. One day while I was there, I watched a gentleman catch over his limit of small bass and he kept everything that hit his line. I had a camper near this gentleman and for the next two years he kept everything he caught and he was fishing daily. Many others were doing this on this lake which used to produce some great bluegills, crappie and bass and after a couple of years you couldn’t catch anything worth keeping. This gentleman took hundreds of crappie and bass out of the lake, no matter the size. After two years of him and others just demolishing the resources, it was no longer a great lake. I have had many discussions with him about this topic and now, after he and others have completely destroyed the lake, he finally realizes that he may have been a contributor. I understand we all like to catch and eat fish, but we don’t have to decimate one lake in order to do so. Make sure you manage any lake you are on whether you own it or its public, the only way the resource will continue to produce for you is if we all take care of it. So, the next time you are out fishing throw back those small fish or bass. Help the lake thrive so everyone can enjoy a great day on the water.

Until next month, May your sunrises and sunsets be magical!