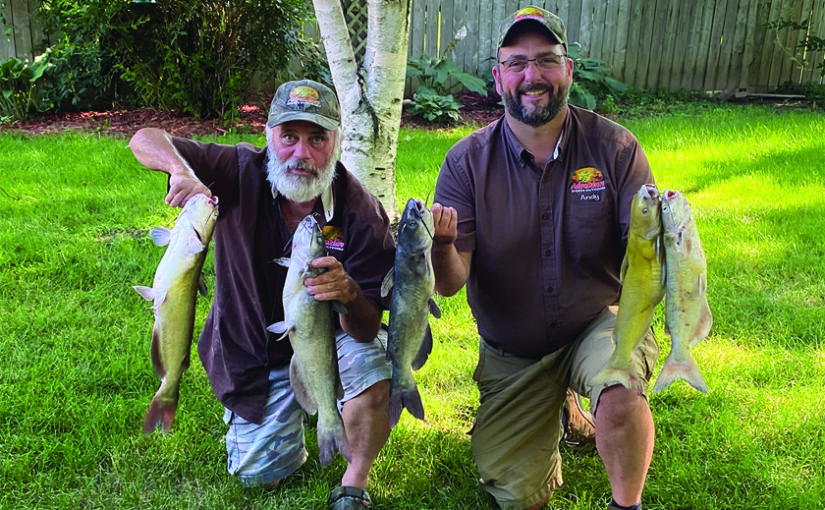 I am sitting here on a beautiful day in July reminiscing about the last month of fishing. July is always the month we try to get out to get some catfish for the freezer for both my grandparents, friends and ourselves. Usually, the spawn is coming to an end and the summer heat has the water temperature rising.

My wife was getting antsy we hadn’t been fishing in over a month and it was time to change that and run down to the river. We watched the forecast and it called for scattered showers and 82 degrees. I thought to myself perfect. Not too hot a little rain would cool us down and this should get the catfish biting.

As we were going to leave the house that morning Leah bundled up with her rain gear and plenty of clothes. I of course didn’t want any part of rain gear if it was going to be 80 degrees. I would take the rain getting me wet then my own sweat. This proved to be a major mistake. As we arrived on the water and started to fish the rain started shortly thereafter. Now remember scattered showers. My A!#. It started raining harder and harder to the point we ran for a train bridge to try and get a little bit of cover. All this did was dump dirty rainwater into my boat and on my head. I can honestly say this was not one of my better fishing moments. After an hour and half of fighting the rain, I decided it was time to tuck my tail between my legs and head for the ramp.

As we arrived back at the ramp the rain just kept coming. As we finally loaded the boat and got into my truck, I realized there wasn’t a dry spot anywhere. My seats had puddles on them, and it was not a comfortable ride home. It ended up raining all day that day.

After arriving home and cleaning the few fish we did have my buddy Al looked and me and said what time tomorrow. I stated if it’s going to rain there is no way I am going. We pulled out our phones and pulled up our weather apps and it said a 0% chance of rain. The day before it was scattered showers on Saturday and rain on Sunday. That script seemed to flip. I figured what the heck we might as well go fishing. What else am I going to do, yard work? That didn’t seem too fun so we decided we would give Sunday a shot.

Sunday morning 5am rolled around rather quickly. Leah decided it was her only day to sleep in a little, so she elected not to join us this day. Al and I headed for the river. We were on the water by 5:30am and ready to fish. As we put our first poles out and prepared the next poles to be set, we had a fish on. Man, that was quick I thought to myself.

We were using several different colors of rubber catfish worms to see which color produced the most fish. We used red, yellow, chartreuse, orange and green. The first fish in was on an orange, the next on a red. The fish seemed to be biting really well. We had a half dozen fish in the boat in the first hour. I figured it may slow down a little but not on this day. Pretty much every 10 minutes we had a fish on. Now we were not catching any giants, but we were catching plenty of catfish. Most of them were around a one pound with our biggest being a little over 4lbs. This was perfect to me. I would much rather eat small whole catfish than catfish fillets, just my preference.

As the morning continued on it really seemed like the fish wanted the orange color. I know what many people say, and I get it. Why the heck would a rubber catfish worm covered in stink bait really matter what color it is. Not sure, but in my experience it does. Sometimes I catch most of my fish on red. The next time it maybe orange or even yellow. We try all different colors each time and there always seems to be one that is better than the other.

As far as stink bait goes, I only use two types. I will try both Bee’Jay Bait Company Channel Catfish Bait (ad on page 53) and Triple S Channel Cat Bait (formerly Sonny’s). I have used every type out there and when I came across these two, they definitely stand out compared to the rest. I have tried many others and have put them to the test, and every time I have done this, these two baits out fish the others.

We ended up 37 catfish in a little over 5 hours. The only problem with this is skinning and filleting all of them. After an hour and half, we finally finished. We both had plenty of fish for the freezer and plenty for my grandparents as well. So, everyone is stocked up and figured that maybe my last catfishing trip of the year.

Right after our fishing trip I headed to a celebration of life for Harry Canterbury. First, we arrived at Springdale Cemetery for a brief service and I was amazed at the outgoing support for Harry and his family. There was well over 50 people at the service and the celebration of life was to take place at Kelleher’s Irish Pub. As we finished the service and headed to Kelleher’s I was thinking what would Harry like me to do to help carry on his legacy. I have the magazine under control maybe I should help Cathy out and keep the ASO TV show going and get back to more of the fishing and hunting side of things. We arrived at the celebration and there were hundreds of people already there. They had a beautiful display of pictures of Harry and all of the different trips he has taken across the world. I kept thinking about how great of life Harry led. He started this magazine back in 1996 and at the time already had a very popular radio show “The Red Nose Gang” and also started ASO TV Show. He was able to live his dream in the outdoor setting. He loved nothing more than shooting ducks. He would tell me the stories of the good ole days of duck hunting and talk about all of the characters he has met over the years. I will surely miss those great stories of his adventures. When people are taken from the world too young, I always think about the memories they have created with family and friends and that is his true legacy. Rest in peace my friend you are already missed.

After thinking about the TV show for a few more days I decided it was time for me to take a crack at it. When I was in the event business, I was told many times that I am great on camera. Most people have a tendency to freeze but I have the tendency to keep talking. After talking with the cameraman for Harry’s TV Show, Kenny Hackney, I decided I was going to go on at least one more catfish adventure on the Illinois River to try and film a show for ASO TV.

Once again, my only partner in crime was Al Schackow. Thank God he is my best buddy, because he is always up to go fishing or on an adventure. We arrived early one Saturday morning in July. The conditions once again seemed to be perfect. We had a little rain the day before and the temperature was only 68 that morning. We headed to our favorite catfishing hole and started filming for the show. We didn’t have anywhere near as good a day fishing, but we still managed to catch 17 to make a nice show. I am anxiously awaiting the final edit to see how this first show turned out. It will air here at the end of August on PBS.

The plan is to continue to do more shows. The future plans will be to have a couple of duck hunting shows from North Dakota, hog hunt in Missouri and I am sure a couple of crappie trips and deer hunting as well. So if you haven’t watched ASO TV in awhile it might me time to tune back in and hopefully we can provide you with some great entertainment and tips.