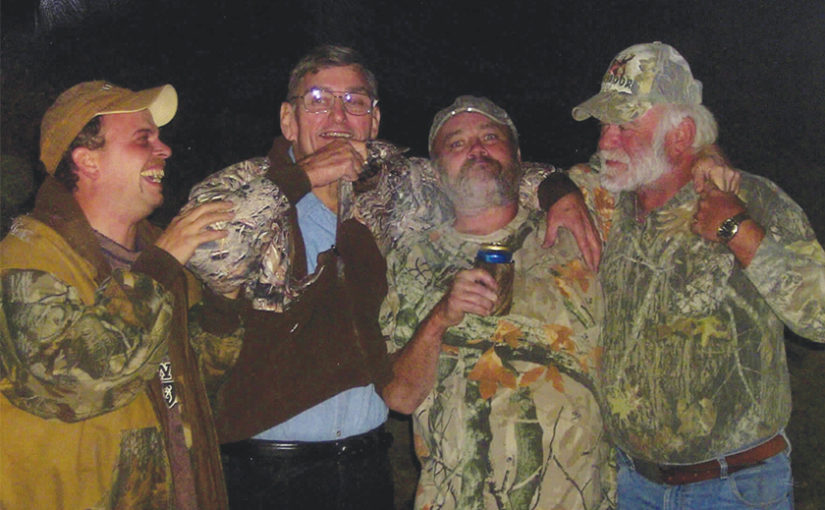 It’s hard to believe it’s the middle of November and we have already had two days less than ten degrees and snow on the ground for more than one day. Deer hunting has been pretty rough to say the least. I have been hitting it hard since Halloween going at every opportunity I can. Unfortunately, most days have resulted in not even seeing one deer. I feel bad because I put quite a bit of time into scouting where the deer are located and trying to get my daughter Ella on them. I can tell she is bummed, and I don’t want to push her too hard and burn her out.

The last week has been rather emotionally tough for me. The reason has brought me to reflect on how lucky that I have been over the last 43 years. I have been fortunate enough to have private land to hunt since I was an adolescent. The first of many of my fondest memories took place on an 80 acre farm in Cuba, Illinois. I spent many summers there bailing hay, building fence and just exploring the creeks and valleys of my grandparent’s farm land. As many of you may have read in the past, I had a specific hill that as a child, I named “Honeymoon Hill.” This hill was pasture that overlooked the big creek valley. I could sit there for hours watching various wildlife run across the fields, eagles soaring in the air and using all my senses to connect with nature. There is no doubt that this is where my love for the outdoors begins. Even through the many grueling days I spent building fence or scooping cow manure, shucking ears of corn and carrying hay to the cattle, those experiences helped to shape my passion for the outdoors.

At the age of 14, my dad found us an opportunity to hunt on a friend’s property in Woodford/Marshall County. I remember arriving at the club the first day. I was in so much awe at the activity taking place at 4:30 AM. There were guys sitting around the dining table drinking coffee, smoking cigarettes and maybe even a beer or two! Basically they were all doing things that I was raised to never do!  It was a whole new introduction into our outdoor activities. One of the things I remember is that everyone was bashing on everyone else, you would have thought they were enemies they were going at it so hard.  The cussing, the smacking in the back of the head, giving each other a hard time! I learned quickly that this was all part of the comradery and simply being part of a brotherhood. After spending a few days spent duck hunting with the guys, we were invited to also join them for deer camp. I will never forget the feeling I had two weeks prior to that first deer season. Every day leading up to it, I would have a smile on my face knowing what was to come and it couldn’t get here quickly enough. My version of Christmas! The day finally arrives; dad and I loaded up the truck and head to deer camp. I really had no idea what I was getting into. As we pull down to the cabin, I soon realized the 4 or 5 normal vehicles that were there had multiplied to 10 or 12! As we walk into this two-bedroom cabin, there are like 8 guys sitting around table, others on couches and chairs and still more standing around. I never imagined so many people at one camp. There were two different card games going on, 10 layers of smoke, beer cans and whiskey bottles everywhere! Even as a 14 year old I thought JACKPOT!!!!!  One of my main concerns in my adolescent brain was “where am I going to sleep?” As it turns out, another kid my same age and I had fire duty, we had to sleep in front of the fire in order to keep it going all night long. The adults saw this as initiation; I saw it as a guaranteed warm spot. The amount of people sleeping in that two-bedroom cabin was unbelievable. They were under tables, under counters, cots in the kitchen, it was a mad house! At this point I was in awe and later in life; I realized just how lucky I was to be a part of it all.

Opening morning came and went, when dad and I arrived back from hunting, there were already 6 deer that had been harvested. Being a 14 year old kid and seeing 6 deer lying there furthered my excitement! As the weekend went on, more and more deer were harvested. Unfortunately, my dad and I weren’t able to get that done. As Sunday rolled around, I was as exhausted as I could be, staying up until god awful hours and getting up at god awful hours, living the deer camp life. Then something even more amazing happened. It was Sunday mid-morning; most of the guys were back in from the morning hunt. And all of a sudden, cars started showing up. I was curious as to what this was about. After the cars parked, in came several ladies and men carrying food.  I realized why most of the guys were back earlier than normal and it was because there was a feast about to happen! It seemed there was enough food here to feed an army. There were multiple pies, casseroles, ham and breads. It was everything you could imagine of a home-cooked meal with a bunch of dirty, stinking men ready to eat. I could never get full at that age anyway but I believe to this day it was the best meal that I ever ate.  Including the best Dutch apple pie I have ever had!  Nothing has ever topped that. I will never forget that first year I spent in deer camp. It was the first time I truly felt like something bigger than myself and felt included in a kinship. Over the next 29 years, this deer camp has been a fundamental part of my life. Things have changed over the last several years, and while the cabin became someone’s home, the property has remained the same. But now this year it is with a heavy heart that I know I’m going into this deer camp knowing it’s the final one.  I have been extremely grateful to have this property available to me but that doesn’t mean that it hurts any less. So many of the great men that I met through deer camp are gone and have passed on. We have had a few new ones through the years but only a handful of us still remain from the beginning. Even though we went from a large group down to just a few, doesn’t mean the experience was any less.

Ten years ago, my grandparents decided it was time to downsize and sell the farm. Unfortunately at that time I didn’t have the funds to purchase. Even though it was a small 80 acres, it was my childhood. There isn’t mushroom season or hunting season that goes by that I don’t think about my grandparent’s farm. Then I had the saving grace after that was the opportunity that Paul Dieble gave me at 14 to hunt his family’s property. Over the years, different pieces have been sold off. People have died, things have been split but there was always one constant, the cabin, even though it became a home, the ridge, the duck grounds in the 110 were always the pieces that seemed to stay together. Now as the family has decided to sell the home and the ridge, it feels like I’m losing another part of my heart. We no longer have a place to gather and to me the main reason for hunting is the comradery that you have with your peers between hunts and in the evenings. I am so grateful for the memories that these two properties have given to me. I know that everything happens for a reason and this is pushing me to realize it is time for me to focus on finding my own property in order to provide my kids, grand kids and every generation that comes after me, a place to experience what I have been lucky enough to have. To all of those folks that own property, don’t take it for granted and those that have been given the gift to hunt on other folk’s property, appreciate it while you can.