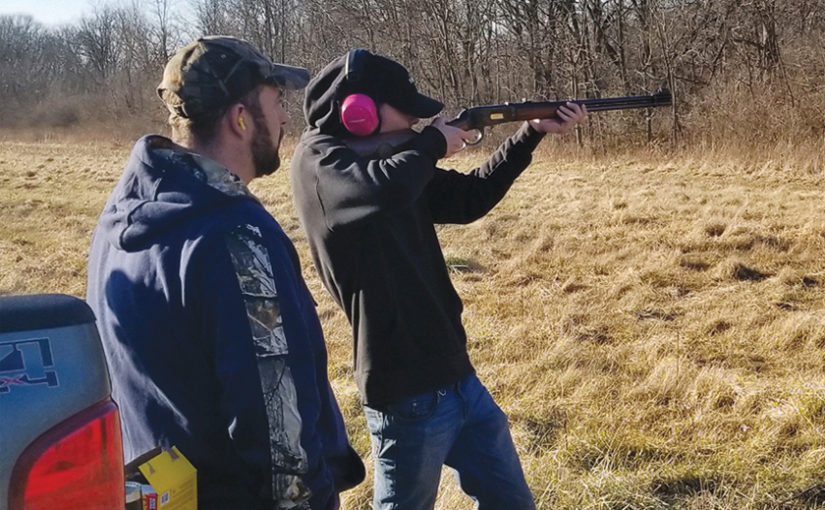 Crazy to think we are a month into 2020. It was a great holiday at the Bugos household. My son Gabe moved to California a couple of years ago and we were seeing him every six months. With the way life and work goes we haven’t had a chance to see him for the last year. I was kind of in need of a Gabe fix. The kid could drive me crazy but he sure is a lot of fun to be around. He actually flew in Christmas day and his momma was extremely happy to have her baby boy home. He was here ten days, but boy did it go by fast! I was so glad to see him and asked him what he wanted to do when he was back and without skipping a beat, he said go shoot guns. Almost struck me off guard that was his first reaction but if my boy wants to go shoot guns I will oblige. We decided to go New Year’s Day. The weather was looking to be nice and everyone had the day off of work. As New Year’s Day rolled around the truck with loaded with several guns and plenty of ammunition. By buddy Timmy was going to accompany us because he is much more of a gun collector than I. I know it’s hard to believe but I shoot the same guns, so I just don’t purchase too many. We set up for the hunting grounds with plenty of targets and ear plugs. We got it all setup and one by one the clips kept emptying. First the 22’s then we moved on to a few different 9mm and then onto the 223, 270 and 30-30. Gabe and his girlfriend Samantha kept trying out each gun available. We tried to get Leah to shoot but she was so enamored with watching Gabe and Sam shoot that she just kept taking pictures and smiling ear to ear.

One thing I didn’t expect to happen was Ella shooting the rifles. She has never been crazy about guns unless it was a 22 or nerf gun, but her competitiveness started to flow. She likes to point out to everyone that she is a better shot than me with a crossbow and she really is. I just come back at her and say “when you could shoot ducks out of the sky you can come talk to me”. Ella stepped up with the 223 and I thought there was no way she would be able to hit the bullseye but once again she proved me wrong. I really can’t seem to understand how she can pick up the crossbow or a rifle and be that dead on. The 270 proved to be a little much for all of them but they all took their turns. After several 100 rounds later, we were cleaning up. It was one of the best days I have spent outside in years. Watching my kids shoot and enjoy the outdoors together was the best Christmas present I could have ever ask for.

Most of the hunting seasons are over and many of us are already thinking about next fall. I know it seems premature, but I am always thinking about what I need to do to have a better season next year. For the first time in several years we had a few ducks. We didn’t have enough ducks to hunt more than a day or two per week but at least there was a few flying and made the mornings worth it no matter what. In the past few years all we have done is shoot a few woodies the first weekend or two and then look at blue skies and nothing much else. As you all know duck hunting is my passion, but deer has taken a front seat because duck hunting has been so slow. This year I finally had to juggle both, and it turned out to be better to be in the duck blind than in the deer stand. Luckily, I did have one great day of deer hunting and with the magic of deer hunting, all it takes is that one amazing opportunity in a year to make all of the work well worth it. My plan for 2020 is to actually get some corn in the duck grounds. Not sure we can accomplish that if we have another year of floods. Over the last five years its been impossible to even get it planted. We did have some millet a couple of years but nothing great that is for sure. Hopefully mother nature will let us get into the ground and reclaim some land that the water has taken over for the last few years. We have our tubes running smoothly and thank the lord we had someone trap a few beavers for us. Beavers are my nemesis. If we can keep the tubes flowing and the rains don’t come fast and furious then maybe, we will stand a fighting chance for once. I remember all of the old stories from my dad and Paul Diebel about when we had corn in here you couldn’t beat the mallards off. I will say I have been hunting there 30 years and don’t recall any of those days. I do remember having gadwalls raining in like you opened the heavens and years when the teal would buzz by you so fast you would just look at each other and say where did they come from and look at each other like why didn’t you see them? I definitely haven’t seen the rain mallards that I have to beat to get out of the blind but maybe, just maybe if I build it, they will come. Wishful thinking but for far too many years I have wanted to see if corn would make a difference. If it doesn’t at least I can say I tried.

With deer season over and not enough ice to go fishing, I think its time to go walking the woods to see what signs of deer I can find and potentially some new stand locations for 2020. We have plans for some bigger and better food plots, fingers crossed. Hopefully with the addition of new stands and larger food plot we can draw some quality deer onto our land. Of course, you always have these grand plans and they rarely seem to work in my world but at least this year I feel like I have a plan. We just didn’t seem to have the deer we normally do and hopefully that’s just because of food situation and we can correct that for 2020. It sure didn’t seem like we had many deer this year but in the last month I have noticed some pretty good groups of does and a few nice bucks roaming around. I am starting to think all of the corn that was in so late this fall affected us more than we realized. The last field was just taken out around Christmas.

What’s next for me? Well I just attended my first sport show a couple of weeks ago in Collinsville, IL the Let’s Go Fishing Show at the Gateway Center. The weather was absolutely perfect for a sport show and over 10,000 people attended the event over the three days. We gave away over 2,000 magazines at the show and so many others stopped by to say how much they love ASO Magazine. It was very humbling to hear all of the kind words people were saying about this magazine. We try really hard to bring you as much good and diverse information in the outdoor world. We feel that every outdoorsman has a voice and we are here to share those with the world. If you haven’t attended a sports show in awhile you should take the time to do so. I know you can get most things on the Internet but sometimes you just need to call up a couple of friends and take a road trip and see what new products are out there and put them in your hand. I understand we are all guilty of buying things on-line on occasion but if we don’t support these sport shows they will no longer be there. Every show offers a great lineup of speakers that can really help you catch more fish or hunt more effectively. There is not one of us that knows it all. We all have room for improvements in all parts or our life. Another great reason to attend a sport show is for your family vacation. At the sport shows there are usually many different destinations. There is nothing better than talking with all of the different resorts and lodges to determine the best fit for you family or man-cation. By talking with the people, you can a good feel for what they are all about. Are they a place to go catch crappie? Great bass location? Walleye heaven? Monster pike?… pretty much whatever you are looking for can be found at the shows. So, take a look at the sports show list and call a buddy and take a road trip. There are many to choose from and hopefully I will see you at the next show.