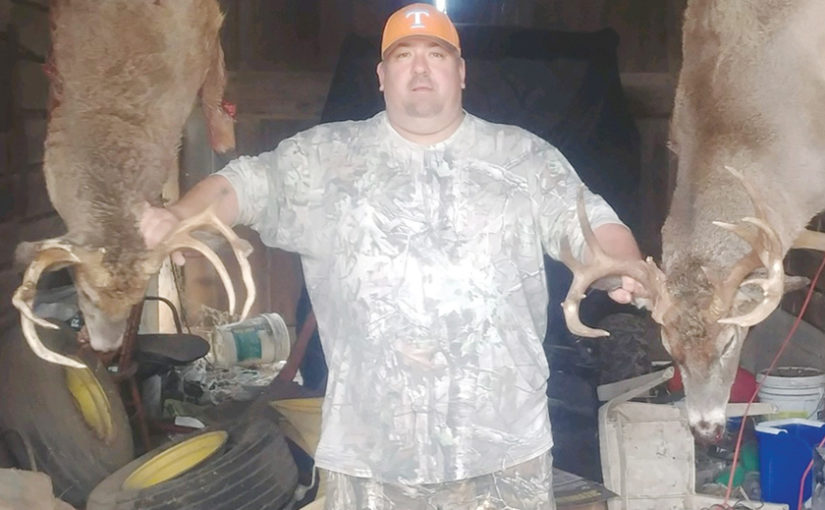 Its mid-December and the weather is nicer now than during the shotgun season here in Illinois. I know everyone says “you live in Illinois what do you expect?” Well, what I don’t expect is a blizzard on a Sunday and a week later my phone is blowing up with people sending me pictures and videos of tornados the following Saturday. Mother nature was very upset with us that week and I can honestly say I have never seen a tornado break out in December. November sure… I live in Washington and in November 2013 we experienced a tornado that took many of our homes and displaced many in our community. Luckily, our house was a mile or so away from the area that was devastated by the tornado. Anyway, to say it has been an unusual weather would be an understatement.

December is always a great month. We have had shotgun gun season at the end of November than the first weekend in December and this is always a favorite weekend for me. Not as much because of the deer hunting but the quality time you get to spend with your friends. Usually everyone has taken the time off to spend the entire weekend together. As the sun was trying to break out over the hill that first morning all could think of is how lucky I am to be able to experience the sun rise and listen to the animals awaken from their sleep. It is the most precious time of the year and I am lucky enough to spend many mornings watching the earth come alive. As I sat there waiting for an opportunity at something large enough to be put on the wall. Ella and I had already filled the freezer pretty full for the winter so there was no need to harvest anything unless it was going to be made into salami and maybe a trophy for my wall. Unfortunately, big daddy didn’t show up that morning but I watched several groups of yearlings playing in the food plot and was entertained by a squirrel who had either had a rough night on the town again or something wrong with his back legs. He kept going in circles for like 20 minutes. Of course, I filmed him to prove that I wasn’t the crazy one. As the day continued a couple of shots rang out but nothing like what we were used to. Usually you hear 6- 10 shots on opening morning but that just wasn’t the case today. It seemed like a perfect morning but only a couple of shots were heard. As I am getting ready to get down out of my stand, I get a text from Matt. I heard him shoot a little earlier and thought he or his son Landon had harvested another deer. Unfortunately, I was at the deadline for the magazine so I had to get back to finish the December Issue of the magazine. After about a half an hour I get a picture from my buddy Tim with Matt and his buck and Landon with his buck. They both had harvested a couple of nice bucks within an hour of each other. Nothing makes me happier than seeing a kid harvest an animal. That feeling is something you only experience during a harvest. The understanding you took a life but the thankfulness you have for the deer and sacrifice it has made to feed your family. A lot of emotions go into your harvest and that is something that none of us should take for granted. Landon has been hunting for several years and this year after shooting his buck he wanted to use his grandfathers 12 gauge. I thought this was an absolutely great way to connect to his grandpa Paul Diebel who passed away in 2014. I started hunting this property back when I was 14 years old and Paul gave me the opportunity. I will always be thankful to the Diebel’s for all of the hunting opportunities they have provided me with over the years. Without them I am not sure hunting and the outdoors would be such a large part of my life now.  Now I get to watch Landon take his grandpa’s gun and try to fill his doe tag. Sure enough a doe made his way in front of Landon and like his grandpa he didn’t miss.

As Saturday and Sunday of first shotgun came and went there just wasn’t any mature deer to be found. We would see plenty of yearlings but nothing over 3 ½ years old. It sure seems like something has changed around our area over the last few months. I keep denying it could be EHD but I have a pretty good feeling it has hit our area once again. Five years ago, it wiped out our mature deer and then for the last few years we were starting to get some older deer. At least some 5 to 6-year-old deer. I was pretty excited looking at trail cam pictures all year but come early to mid-September there just wasn’t the bucks and mature deer hanging around. I thought they just changed their pattern a little but now I look back and realize what really happened. Then during a hunt in one of my stands my friend looked down and there was one of my target bucks laying there with just bones and a little fur left. He has applied for a salvage tag and will be putting this in his collection. If only I would have looked down during my first hunt in the stand, but I was only there for 20 minutes when I shot my buck so that is my excuse.

As second shotgun season arrived, I was excited to just sit in the woods for four days and see what happens. Thursday rolled around, and I saw a few small deer but again nothing spectacular. I sat until 10am and decided to grab lunch then head back out. Unfortunately, it was more of the same in the afternoon however I did see a nice 3 ½ year old buck that had some future potential. Hoping that the next three days would be better, back to deer camp I went. Unfortunately, I didn’t know at the time that the flu bug was going to get me that night and not release me until Sunday so for the first time in many years I only hunted the one day of second season. My friends hunted most of the weekend and nothing was even taken off the farm. We used to have 10 to 15 deer per season and usually 6 to 8 opening day, but those days seem to be behind us. We may need to start rethinking the doe tags. I know the disease my get them but without does we won’t have a population at all.

After deer hunting, I was hoping to get back to trying to find some ducks, however I couldn’t find any ducks to hunt. Usually when we get a little freeze, we start getting ducks on our ditch. This year has not been the case, so I received an offer to hunt behind some Labradors at Marine View for a pheasant hunt. I try to go pheasant hunting at least once a year and usually I go Gobblers Knob near Canton, IL. My dad loved to hunt pheasants, so it is a tribute hunt I like to do each year. When Mark and Ed McIntyre ask Tim and I to go on a pheasant hunt at Marine View I jumped at the chance. I have been to many places pheasant hunting when I was a kid and this was one my dad and all of his work friends would get together and hunt several days of the week during Caterpillar strike. The last time I hunted there was probably in the early 90’s. It is always nice to hunt with new people and new dogs. I enjoy watching all different kind of dogs work but in the end I am a Labrador man.  We arrived at Marine View early on Sunday morning and we entered our names in and waited to be selected. The guys picked a field and off we went. They had three dogs which was great. I have never hunted behind multiple labs and I think the pheasants were in for a rough day. We walked through the fields and along the edges of the tree lines. After about 15 minutes the first rooster took flight and I heard the shots ring out from Mark’s gun. Unfortunately, the only thing that was heard after the shots was the pheasant laughing his way over to the next holler. As we continued a few minutes later up came another pheasant this one was not so lucky. Mark pulled up and down the bird fell. We continued to walk along the strips of trees and every 20 to 30 minutes it seemed we were kicking up pheasants and as they took flight, they fell one by one. After we had four of five pheasants, we decided to get the dogs a drink. As we neared the end of the field near the parking lot up came another pheasant a few shots rang out but off to a cut bean field it flew. The dogs would not give up on it. They chased it to through the open field and the next thing we knew here come a pheasant back to us. Shots were fired to no avail. He got away we thought. As the dogs come running back across the field Mark notices that the dog has a bird in its mouth. We were all stunned the dogs went into an open field to chase the bird. We had a bird fly back to us from that direction but, yet the dog has the pheasant in his mouth! Not sure what the heck happened but we did get one of the birds. After giving the dogs a drink, we continued our hunt until we only had a couple of birds left to finish our limit. Ed and Mark decided we would go try a spot just down the road and take a little walk to try and finish our limit for the day. As we walked, we had a few opportunities, but they seemed to be flushing in the timber which made shots extremely difficult. We plugged away for another hour or so until we had our final birds. I had such a great time getting to know Mark and Ed and look forward to the next time we can hunt together again. I wish more people would hunt with new people. Don’t get me wrong I have some of the best friends in the world but there is always room for more. If I hadn’t of gone with Mark and Ed, then I wouldn’t have gotten to watch their dogs work and enjoy several laughs with new people in the outdoors. I think we should all take the time to hunt with someone new. It adds a little more to the hunt when you’re with new friends.