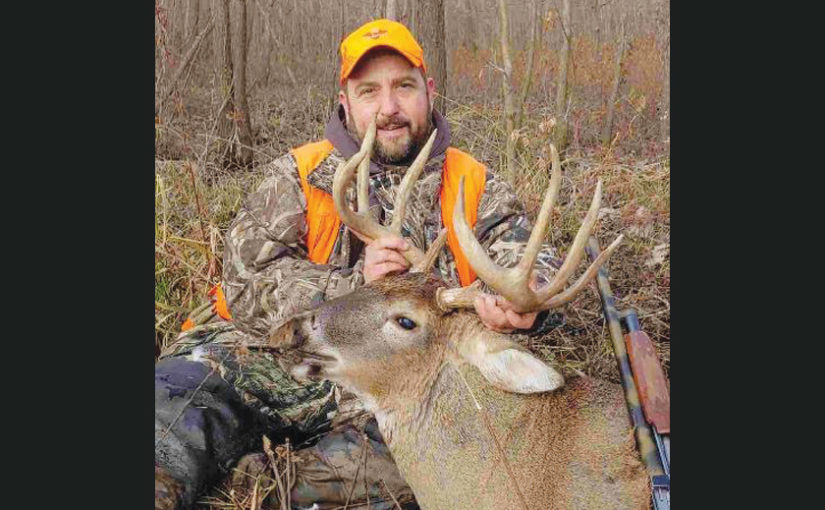 Well I think old man winter has arrived. After the two, 8-degree days in November, I was worried that this would be the beginning of a long winter. Luckily, it was short lived and up until today we hadn’t had any snow or really low temps. As hunting season has progressed, I have been hearing a lot of the same. Nobody is really seeing any deer. Since early November I have been chasing the whitetails. Unfortunately, they seem to be winning our battle. Before shotgun season I was in the woods for 15 days trying to wait for the rut. Unfortunately, it hasn’t worked out with the bow this season. Ella has hunted with me a half a dozen times and we have yet to see a deer while bow hunting. This is definitely not something I am used to. Anyone that knows me knows that waiting isn’t one of my virtues. I wish it was but its hard for me to sit still for hours on end while not seeing a thing. If I see a few it seems to keep me interested but if I go a couple of times without seeing a deer, I tend to get restless. This was the year of restlessness. In past years it seems as the rut is usually in full swing from around November 4th to the 15th or so, so I try to spend as much time as I can waiting on the monster bucks that I know are in the valley. This year, during what I always say is the prime week or two, I saw nothing. I heard people talking that they thought the deer had found their doe’s and were just sitting waiting for them to consent. I wish I could say that was what I was seeing but it definitely wasn’t. Ella after the sixth time was losing interest and the last thing I wanted to do was burn her out before it started getting good. That just never seemed to happen this year. It seemed as if there was one guy hunting on our property and he was seeing deer but the other three of us were seeing nothing. It made me wonder “did the disease hit us again this year? was there a larger kill off last year than we had imagined? have we been messing with the property and the deer are not sticking around like normal?” Every day I seemed to be thinking of another reason I wasn’t seeing deer. I mean, when your sitting in the stand your mind wanders all over the place… well at least mine does. I have talked with several hunters that hunt nearly every day and it seemed to be having the same results. As shotgun season neared in mid-November, I thought for sure I would have some meat in the freezer by then and I could just sit and wait for Big Luey. The week before shotgun I hunted several days with the same result. A couple of days before shotgun I decided to check all of my cameras so I could have a game plan for shotgun season. As I went through the pictures, I saw several shooters that were in the 140 – 150 class of buck. They all seemed to be showing up at first light or during the night. I thought for sure I would see lots of daytime photos since these cameras had been out since the first of November but that just wasn’t the case. Two of my cameras only had 25 pictures on them in almost three weeks. Usually I would have up to 100 pictures in that amount of time but not this year. The deer seem to not be in their same haunts that I usually find them. As opening day arrived, I decided to try my luck in a ground blind that we had set up a few weeks earlier. This seemed to be the only location I was seeing any deer and definitely the only camera that had a few shooters. In October I was seeing eight to ten different bucks on camera. Not all shooters, by any means, but we had a few forks, a really tall spike, a wide eight and one really nice 10 point that look like a moose compared to the others. I decided that this was the deer I wanted to harvest during shotgun. All I could do was hope that he was living in the area and would make a mistake.