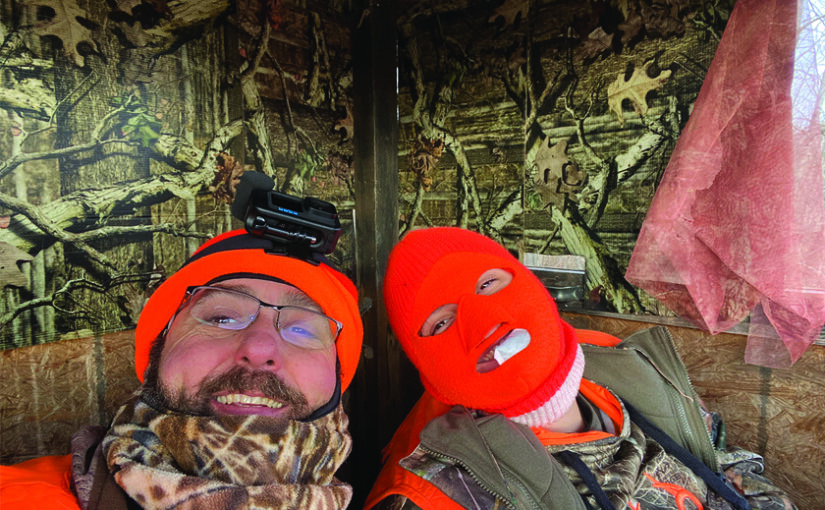 Another year has flown by, and hunting season is winding down. As I was preparing for the 2nd shotgun season in Illinois, I was excited to get back in the woods and see if one of those big bruisers would make a mistake.

Unfortunately, my plans had a major change. I wasn’t able to get out Thanksgiving weekend because we had to move my mom back from Indiana and at the same time, I started having problems with a tooth. I made an appointment to have it looked at and during my first visit they evaluated the tooth and decided they needed to do a root canal and get this taken care of the day before the second shotgun season. When I arrived that morning, I was well over the pain and ready to get back to normal where I could eat something other than soup. As they numbed my tooth, they started the root canal. After two of the roots were out, they started on the third root and that is when all hell broke loose. When they hit the nerve, I came out of that chair like a hyena on drugs. The pain was almost unbearable. All of the staff could see the pain I was in, and the dentist immediately had their team calling oral surgeons to get me some help. Unfortunately, that didn’t work. Not one place could get me in until Monday. This was Wednesday and opening day of second season was the next day. They scrambled to try and do anything they could to help the pain, but nothing was working.

After an hour in the chair in pain they took six or seven more shots to try and numb my tooth. She wanted to give it one more shot to see if they could get this done so I didn’t have to suffer. That didn’t work. Once again I was in extreme pain and nothing they could do but give me some pain medication and send me home.

After arriving back home I called a number they gave me to an oral surgeon and they said they could get me in the office in January. There was no way I was going to live like this for two months. Luckily, I received a call saying they found me an appointment for Monday morning to have it removed.

There was no way I could go to the woods with my face hurting like it was. I had a golf ball on the side of my face that we found out later was an infection. So, if you have pain in your teeth, don’t wait. Don’t do what I did and cost yourself time in the woods. It was hard to sit around the house all weekend knowing all of my friends were sitting in the deer woods. A lesson learned I suppose. From now on I will make sure this stuff is taken care of in the summer, so it doesn’t cost me in the winter.

Other than missing out on deer season everything else has been great. My mom is now back in Illinois and my stepson Gabe and his girlfriend Samantha decided California just wasn’t for them. Gabe left home five years ago to go work for his dad in California. A couple of years after that we took Samantha out there to join him. Samantha spent two years out there, but they came to the realization that they just couldn’t afford to live there anymore. Gas is higher there than here in Illinois and their rent which was $1,800 a month for a small apartment and  would be going up to $2,200. I am not sure how anyone could survive out there. Their taxes are as bad as Illinois and the politics are as bad as well. I know my wife is ecstatic to have her baby boy home and it’s nice to have him closer to family. I commend him for taking the leap out of high school and experiencing this journey helped him grow into a man.

One thing that has really excited me about having Gabe home is he is looking forward to start deer hunting again. I have never forced hunting on my kids. If they want to go then load up and let’s go. If not, that is fine as well. One of the first things he said to me was, “Can I start deer hunting again?” “Of course,” was my reply. “You can go with me anytime you like.”

As I have gotten older, I would much rather see my kids and others harvest deer. Sure, I would like to get one as well but in reality, I get much more excited when they harvest something. I will never forget the first duck Gabe shot. We were hunting at our duck club, and we dropped a duck in the willows. I told Gabe to get out there and find it, so he headed out to the willows. As he picked up the duck, I saw some woodies coming his way. Just at that moment he turned around, pulled up the gun and when he pulled the trigger a beautiful drake wood duck came crashing down. I started screaming like a little girl. I was so excited to watch him shoot the duck that I didn’t care if there were still birds in the air. It was an experience I will never forget.

I think all hunters have a responsibility to take out young hunters. Our age demographics for hunters has been getting older and older each year. Kids today have so many options for entertainment. They can sit on a computer all day or play video games until their hearts content. One thing is for sure, if you get them in the woods their mindset will change. They will realize why we spend so much time in the tranquility of the deer woods.

One of my pet peeves is the way other hunters are treating other hunters. When first shotgun season was about to begin, all the social media posts were about the orange army. Many bow hunters seem to think that their way is the only way you should harvest a deer. In reality, not everyone has the time to spend in the woods whether it be because of family, work or other obligations. I don’t understand why we as hunters just can’t respect other hunters. Sure, I would love to harvest every deer with a bow because it is definitely much harder to shoot a mature deer with a bow than a shotgun, but that doesn’t mean it is wrong.

My greatest memories are of deer camp during shotgun season. It had nothing to do with hunting and more to do with the camaraderie of friends. When I was 14, I was invited to my first deer camp. I walked into a little two-bedroom cabin and when I arrived there was more than ten people already there. I was nervous considering I was one of two young kids there and I was surrounded by a bunch of beer drinking, card playing, smoke rising hunters that were having the time of their lives. At first, I thought I was out of my element, but I soon learned this is what deer camp was about. Spending time with friends eating good food, playing cards, drinking beer, and telling stories that no one believes. I learned really quick that I had found one of my happy places.

When someone at deer camp harvested a deer, we would all stand around the truck as the proud hunter explained how everything went down. There was never anyone saying anything about the size of the deer harvested. Everyone was just happy to be there and that they harvested a deer.

It seems over the last 30 – 40 years this mindset has changed. Everyone wants to shoot a big buck, but in reality, to shoot a big buck you have to spend a lot of time scouting in the woods and still you need to have luck on your side. In today’s world you see everyday on social media and other platforms where people are always asking to score the deer and, in the comments, you will see people judging one another on their choice. Who cares how much the deer scores, the only thing that matters is you are happy with your harvest. It shouldn’t matter to anyone else.

I have to admit I have noticed that I have changed over the years. When I was younger, I would head out opening day of shotgun season the first buck and doe I saw would be on the ground. It didn’t matter the size. I was just happy to harvest the deer and get to spend more time at the cabin listening to stories from the old timers about the glory days of deer and duck hunting. I learned a lot by sitting around a table listening to the old guys talk about years past.

Since purchasing ASO Magazine over six years ago I have changed my stance on how I hunt. I have more time to spend in the woods, so I am much pickier these days. I would love to harvest a giant buck each year but let’s face it, that is not something you are going to be able to do year after year.  I have passed a lot of deer over the last six years waiting for a big deer but that is my choice not anyone else’s.

It does make things easier when I have a daughter who loves to hunt deer. Now I can sit back and enjoy many days in a field with her, and she is now the one that provides the meat in the freezer each year. There is no better feeling than watching your kids enjoy the harvest and being a part of it.

A few weeks back we picked up Ella’s deer from the locker. I decided to make spaghetti for the family, and I wasn’t going to tell Gabe and Samantha it was deer meat. As we sat at the table we started eating and of course Ella couldn’t keep her mouth shut and looked up at Gabe and Sam and said “You know you’re eating my deer right now?” She is so proud that she has put food on the table for the family and nothing warms my heart than to see my daughter excited to feed the family.