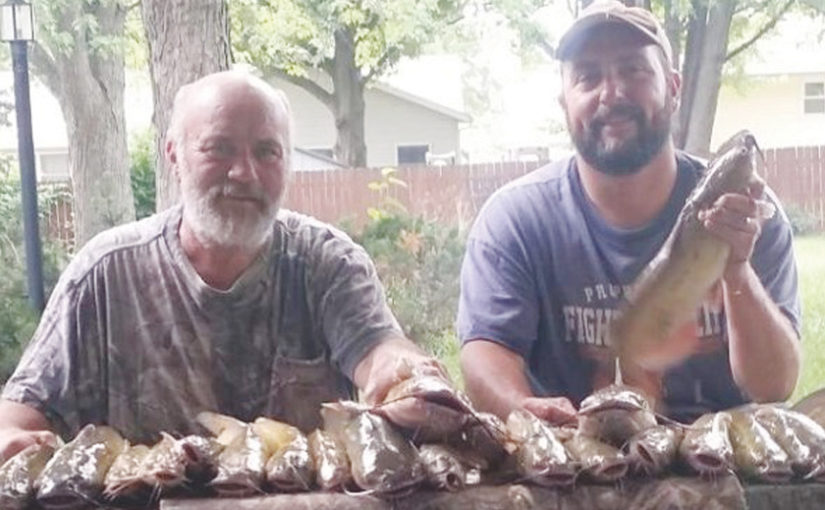 Well summer has arrived in the Midwest. It may have arrived a few weeks early. As my family and I prepared for our annual Memorial Day Camping Trip I kept checking the weather. They were calling for mid 90’s with a heat index over 100. I thought maybe this should be the year we cancel our trip but we have been when it has been cold and rainy all weekend. So we must take the good with the bad. We decided to go on Friday when it wasn’t so hot to set up camp and get a little fishing in. The bluegill were definitely on the beds. We were catching them as fast as we could rebait and throw the bobber back out. There is definitely nothing better than watching Ella, Leah and Kaitlyn pull in one bluegill right after another. It was hard for me to even keep a pole in the water. I was spending most of my time taking fish off the hook or rebaiting poles. We sat on the water for about three hours and by this time it was heating up and time to go back to camp to take a break. As the day wore on the heat became almost unbearable. The heat index at 10:00am was already pushing a 100 and it wasn’t easy to stay cool. We usually have four of five groups that will camp on this weekend, but this year is was just two groups of us. It seemed too hot for the others to set up camp and fish. As always we made through the weekend and were able to put a few fish in the freezer. One thing I don’t like is having a freezer with no fish in it. So I was on a mission to get a few fish to fry up later. Unfortunately, with the heat the only thing we could do was fish a few hours in the morning until the boat became so hot you were burning yourself every time you touched it. We made the best of the situation and as always had a wonderful weekend with family and friends.

After Memorial Day Weekend I still had the itch to get out and catch some fish. I heard the catfish were hitting on the Illinois River so I ask my wife Leah if she could take a day off during the week and we would hit the river to catch some catfish. I think the most relaxing fishing you can do is find you a nice school of catfish, bait up the dip worms, cast out and wait. If we don’t get a bite in 15 minutes we reel in and rebait. Fortunately for us we didn’t have to even wait the 15 minutes before we started getting bites. Leah hooked the first fish and off we went. After only a few hours of fishing we had 15 in the boat and getting bites consistently. After spending about four and half hours on the water we caught 21 catfish ranging in size from one pound up to eight pounds. It was really nice to get to spend the day with my wife just her and I enjoying a beautiful day on the water. There is nothing that makes me happier than watching her fight an eight pound catfish and watching the reaction on her face. To say she loves fishing is an understatement. I am very lucky to have a wife that loves to fish. Maybe even more than I do. No Disney Land for us we would rather spend our free time on the water with less chaos. The only chaos we want are the ones that involve catching fish one after another.

Of course after the wife and I had our trip my buddy Al was chomping at the bit to get on the water. He wanted some catfish for his freezer and now was the time to get back on the water and catch a few more. After some convincing I decided if he wanted to go catfishing we could get up early on Saturday and hit the water before the sun scared us away. It was quick action. As soon as my first pole settled to the bottom and I began to bait up my second pole the first already had a fish. As we sat there for several hours the bites were coming every 15 minutes or less. One thing is for sure if Al is with you and you are catching fish it will be hard to get him off the water. He will fish from sunrise to sundown everyday if he could while after six or seven hours I am ready to call it a day. Not Al, he will keep you going until you drop. We ended up with 28 catfish and all I could think is we are going to be cleaning these darn fish in 100 degree heat but I really do like having fish fry’s. We cleaned up the catfish and had plenty to take home and vacuum seal up for later use. I have always loved catfishing but it isn’t something I do too much of. I prefer my crappie and bluegill over everything else. Catfish are fun to catch but when it comes to my table fare I would prefer some crappie, bluegill or walleye. Don’t get me wrong I like catfish but it is hard to beat those other species.

My last adventure during this past month is our annual trip to Lake Michigan to fish with my friend Dale Florek with Noble Charter Service. I have taken other charters before but nothing has compared to the fish that Dale seems to catch. Dale has been fishing for many years and he has it all figured out. As before any trip we check the weather and it was supposed to rain on Saturday and then again on Sunday when our charter was scheduled. I have always been lucky and had great weather when we have been up there fishing but this year would be different. The temperatures were going to be in the high 50’s in the morning with rain off and on all day. As we woke up early to head to the docks it was pouring and some lightening and I didn’t really know what to expect on a day of rain and clouds. When we arrived at the docks we noticed the heavy fog on the lake and we wondered if we would even go fishing. It was not even a question. We loaded up and off to the fishing grounds we went. We were hoping for a great day to help put some salmon in the freezer for the year ahead. As we arrived on the fishing grounds first mate Blake started setting the poles. He no sooner got the first pole in the water and was setting the second when the first fish was on. That was by far the quickest hook up I have seen on the lake when I have been fishing. As Leah reeled in the first fish the rest of the group was preparing for their turn. It didn’t take long before there was another hook and Brandon was ready to reel him in. On our trip was Leah, Brandon Bach, Al and AJ Schackow, Tim Conover and myself. We had a full crew and was hoping to have a great day on the water. As it turned out it was better than a great day. We arrived at the boat at 5:00am and we were fishing around 5:30am. We ended up with our limit of 30 at 9:20am. It was a quick limit and we all had a blast. If you ever want to go to Lake Michigan and catch Salmon you really need to give Dale Florek with Noble Charter Service a call at 224-488-7263. He will put you on the fish and happy you picked him to take you on the water. His boat is a 36-Tiara Sport Fisherman and it is as smooth of boat as I have been on. Both Blake and Dale are dedicated to putting you on the fish.

On a sad note a very influential person in the outdoor industry has passed away. Mel Johnson who in 1965 harvested the World Record for Whitetail Deer with a 70 pound recurve bow and arrow. The record still stands to this day. Last year I had the privilege to sit down and talk with Mel. He was an amazing man that had accomplished many things in his life. He was gracious enough to allow me into his house to see his record book buck along with so many other trophies. He was a dedicated hunter that hunted animals across the world. It seemed in his later years he was still an avid turkey hunter. After spending several hours with him I was at a loss for words. His stories of hunting in years past, the people he hunted with are something I will never forget. He was so humble even though he had so many accomplishments. He has taken some record book bears with his recurve as well so he truly was a great hunter and ambassador for our sport. I would like to thank his son Tadd for getting us together and allowing me the opportunity to speak with him and listen to all the knowledge he has gained over the years. I was a very special visit for me and I really appreciate the opportunity to spend the afternoon with him.  Rest in Peace my friend.

Surviving are his wife Pauline of Metamora; son Tadd M. (Peggy) Johnson of Peoria; daughter Elizabeth D. (Billy) Vancil of Metamora; grandchildren Madison, Brody, and Allie Vancil and Jacob Johnson.  He was preceded in death by his parents and brother Paul Johnson.

Mel graduated from Woodruff High School in Peoria.  He is a U.S. Army Veteran serving at Fort Leonard Wood, Missouri and also in the 301st Signal Company in Ft. Monmouth, New Jersey.  Mel worked as a test engineer for Caterpillar Tractor Company.  In 1965 Mel established the world record for Whitetail Deer with a 70 pound re-curve bow and arrow and the record still stands today.  He is the recipient of the Ishi Award and the Sagamore Hill Award.  He was a senior member of Pope and Young Club and Compton Bow Hunters. He taught the appreciation of nature, wildlife and the woods, and how to survive and hunt in the wilderness.  Mel always said “The lie will always catch up to you” and “if you are on time, you are late, and if you are early, you are on time”. He enjoyed deer and turkey hunting and fishing, movies, automobiles, professional football (Bears and Packers) as well as the hometown Metamora Redbird football team. Mel often gave his perspective, advice and recommendations on life from his common man perspective. Although saddened by his passing, we will always cherish and value the life lessons that we gained from dad’s life’s journey.