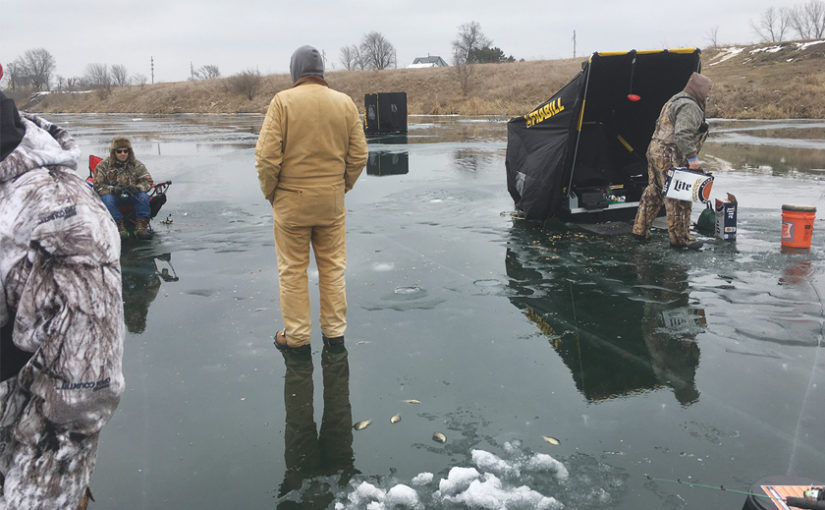 Well, as I sit here in my office, looking out the window, I see the snow is melting and its 52 degrees outside. Not bad for February but it sure hasn’t been that way much this month. We have had plenty of snow in Central Illinois and our friends to the North have had it much worse than us.

I just returned a couple of days ago from Central Illinois Outdoor Expo in Arthur, Illinois and unfortunately on the Saturday of the show we had a little ice which didn’t seem to help the crowds. As I was sitting at the show I started day dreaming of all of the past outdoor shows I used to produce. For 17 years after college I was a show promoter and really enjoyed the outdoor shows. Now this was back in the late 90’s and there was an outdoor show every weekend and many times there would be two or three on a particular weekend. Now there just isn’t as many sport shows as there used to be. Back in the late 90’s we would have 100 to 125 booths. Four to six boat dealers and lots of attractions for the kids. If we didn’t see at least 6,000 people at the sport show it seemed pretty slow. We always felt like if you had 8-10,000 people that made a really good show. I know there is still several shows out there that have these kinds of numbers, but they are few and far between. I remember making those sales calls to all the different tackle dealers. It was always my goal to get at least 25 or more booths that had tackle. I think the main reason people come to the shows was to pick up the new lures on the market or maybe stop by a booth that makes their own products.

See, before the internet took over, people had to go to the shows to get that certain favorite lure. You couldn’t buy it on-line or even at many stores. You had to attend an outdoor show to have the lures you needed for fishing that season.

I remember one vender very fondly. Bob and Mary Folder Lures. They had a tinsel jig that they made and sold all over the country. When I met them, they had been going to shows over 50 years. It was wonderful too talk to them and to hear all of the stories they had from different sports shows. They understood the business better than anyone. I remember a show we had in Rantoul, IL and it wasn’t a large show, but it had many vendors and a good crowd each and every year. Well, the first year we moved the show out of an airplane hangar, we moved to a facility outside of town. Thinking this was the best move for us, we spent extra money in marketing and was hoping to have the best show we have had in that area. Of course, mother nature had other ideas and it snowed and was blowing like crazy and hardly anyone braved the weather to go to the show. Even though there is absolutely nothing I could do about it, some vendors will always take it out on the show promoter.

After a Saturday of low numbers and unhappy vendors I was at my wits end. I never was one to get too excited but having vendor after vendor complain and its out of your control, it just seems to wear on you. Just then Bob Folder comes over to me and starts making jokes and saying, “hey kid I have been in this business a long time and you produce quality shows so don’t get down on yourself.” I learned that day that no matter how bad you feel in those situations there is always someone there that appreciates the time and energy you put into those events.

I do miss them, and I think that is why I am in this business now. For years after we left the outdoor show business I always wanted to do something for the outdoorsman. I tried bringing back shows that were once popular like the Midwest Waterfowl Deer and Turkey Expo but by about 2003 there was just not the crowds attending these events like there once was. As that business changed so did we. Evolving into more corporate events, conferences, and kid’s shows became more of our focus. I always wanted to be apart of the outdoor world in some way. For all the outdoorsman out there please take the time to attend a couple of sports shows or there someday may not be any for us to attend. You can see a full list of outdoors shows on page 25.

I was wanting to try and make it out ice fishing at least one more time but I think the weather is telling me its over. I just started ice fishing a few years ago when my friend Al decided I needed yet another hobby. I used to sit around all winter and go stir crazy but with a friend like Al that is just not something that is going to happen. He is by far the only person I have met that I can’t keep up with. He is ready at 5:00am and will fish until dark or after. To say he is a diehard may be the understatement of the year. He was going out fishing last week on Sunday and with only 4 inches of ice there was no way I was going.

As soon as the ice was 5 inches thick we started our season. The first time out we did ok but the next 6 times we could not even get the babies to bite. Then came a call that got me excited. Mike O’Bryan was having a few people out to ice fish and hangout at Irish Acres. If you remember last year me and my wife had an amazing morning catching some very nice crappie. I know he has managed this lake well, so my excitement was high. After having several fishing trips produce pretty much nothing, I was looking forward to catching some fish.

As Al, Tim and I loaded up the truck that morning we were all excited. I looked at the guys and said why do we get so excited to go drill holes in the ice to catch fish? None of us had a good answer so away we went. When we arrived, there was a few people already on the ice, so we loaded up and started the track across the ice. When we got to where everyone was fishing… they were already catching a few. So, we set up shack, drilled some holes and wet our lines. It wasn’t long before we started catching a few. No monsters, but it was nice catching fish all the same. As we sat there several people showed up to join us. This made for one of the best ice fishing trips I had ever been on. Not because we were catching so many fish but because of the great stories being told. I didn’t know many of the guys, so the stories were all new to me and boy did I have some chuckles.

We had a great time and then it was time for lunch. You talk about a spread of food. They had everything from cooked rabbit, pheasant to chili, rice and beans. When you come off the ice you are always hungry. What am I saying??? If I see food I am hungry. We filled our bellies and many of the guys were calling it a day and hanging out at the building, but we wanted to catch a few more fish, that’s why were there. We didn’t really catch a ton of keepers, but it was by far the best day I have ever spent on the ice. I truly enjoy meeting new people and making new friends and those guys were top notch.