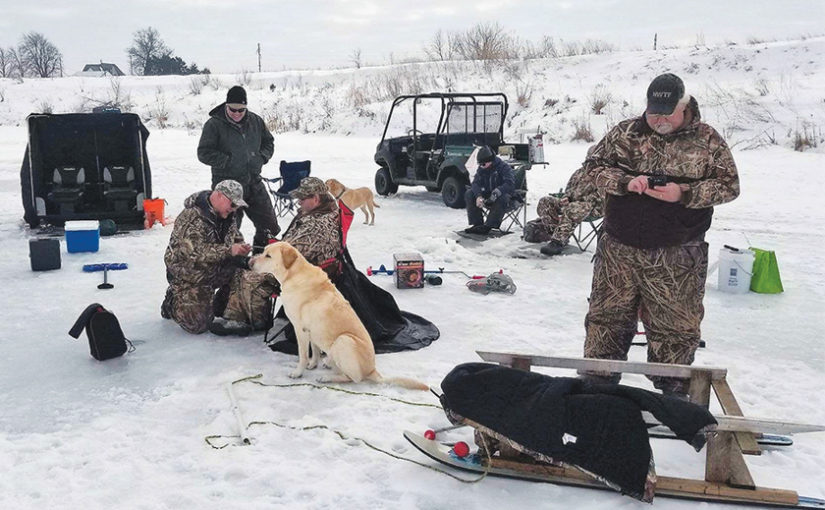 Well here we are another month has passed and all I can think about is fishing. Ten years ago, you couldn’t have convinced me to go ice fishing if you paid me. Then of course my friend Al happened. He finally convinced me to get on the hard water with him and happily spread his addiction. Don’t get me wrong I love hunting season, but fishing is something you can pretty much do year-round. So, after my hunting seasons are over, I pray for the hard water. Some years it seems we have plenty then other years it is here for a few weeks and gone. Last year I was only able to get out a couple of times. So, I decided if we did get ice this year, I would set aside a couple of days and fish. After the crazy weather we have had in Central Illinois we finally had some good ice and I decided I was going to take four days and fish every day. Of course, with Al I knew I would have at least one partner in crime. As we watched the weather it was calling for -45-degree windchills on Wednesday and we had our heart set on fishing Thursday – Friday. I say that the temperature was only going to mildly better on Thursday, but I thought that is why we have a hut and heater so let’s be the only crazy people to venture out and go fishing. I mean even the postal service canceled deliveries and we decide “let’s go fishing!”. We rounded everything up Thursday morning and headed for a strip in Farmington, IL. We knew this location would be protected from any wind and the ice would be more than thick enough for us. We stopped for breakfast trying to stay warm for as long as possible. We were finally on the ice around 9:00am and it didn’t take long to start catching fish. I really didn’t think we would fare well with the weather conditions, but we caught some crappie, bass and bluegill to keep us entertained. We had a great first day and thought man with the weather heating up it should only get better.

Day two came around and we decided to try something new. We went to a public location that I have heard great things about for years but never gave it a real thought for ice fishing. We arrived early Friday and started trying to locate fish. It took us a couple of hours to find some deeper water but when we did, we caught a couple of very nice crappie. I am happy with a 10” crappie and we had one a little over 10” and two over 12”. I need to send a special thank you shout out to James Thrasher. We met him on the ice, and he was very gracious with his information. I know many fishermen keep their information to themselves, but James offered up a lot of valuable information that helped us catch fish. I appreciated his willingness to share. Even though we had a slow day I was bound and determined to return here on Sunday. It was going to be 50 degrees and the bite should be on.

Day three we received an invite from Mike O’Bryan’s Irish Acres and of course there was no way I was turning that down. See, when you go fishing with Mike it doesn’t matter whether you catch fish because no matter what you will have a great time and good food. We arrived early Saturday morning to get a jump on the fish. I was 30 degrees and it felt like a major heat wave. As we usually do at Mike’s we started catching a few fish right off the bat. The bite was extremely light but if you could pay attention long enough you could catch a few nibbling on your worm. As the day progressed several groups started to show up. First it was Joseph’s Rick, Mike, Mike and Nate. When you see them roll up you know its time to start laughing. As the day progressed several more people joined the group and one friend I haven’t seen since my event days… Jim Weatherington. It was awesome to see him and catch up with him and the rest of the group. The bite was not crazy, but we did get a nice mess of fish that ended up in my fryer. At the end of the day all that matters if you had a great time with friends and have a few potato chips in the fryer. Thanks, Mike O’Bryan, for the invite and friendship.

Day four rolled around and I felt like I was hit with a Mack Truck. It felt as if I had been duck hunting for seven straight days in North Dakota, but there was no way I could sleep in. It was the last day before having to get back to work and the land of the giant slabs was waiting. We arrived on location at day break. We wanted to be the first on the ice and we had a mark of where we wanted to fish. When we arrived, there was one group on the lake and we didn’t think anything of it. As we walked to our coordinates, we realized these guys were fishing the exact location we wanted to. What are the chances? We decided to give them a little room and drill some holes along the same deep ledge. As the day went on, I watched the gentlemen in front of me pull 6-8 nice crappie out of the hole and all I could think about is that could be me. After four or five hours of catching one fish the gentlemen in front of us had to leave so we took over their holes. Unfortunately, we didn’t get many bites until around two. Then all of the sudden we received several spurts of fish and the next thing we know is our group had 12 – 14 nice Crappie. Nothing to go crazy about but when some of the Crappie are over 13” it doesn’t take many to make a meal. We may not have hammered the fish over our four-day ice fishing extravaganza, but boy did we have a good time and it was worth every minute.