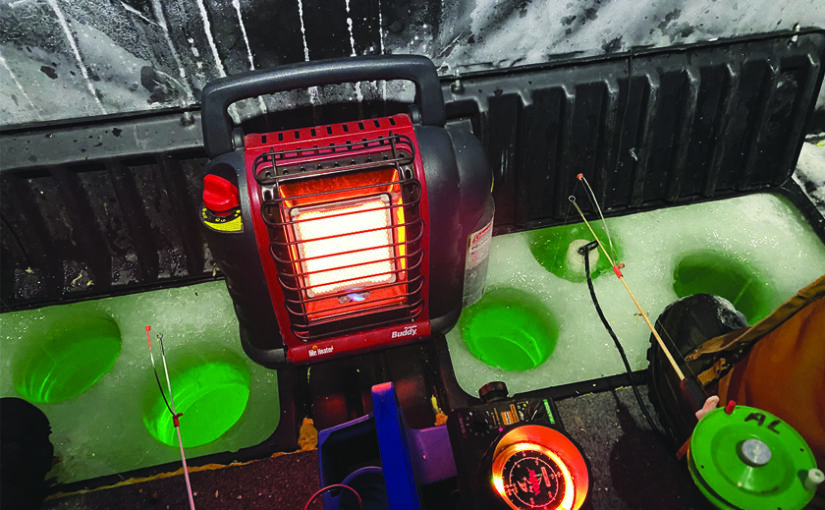 Well, we were pretty lucky most of the winter avoiding a major cold snap but then February showed. We finally are getting the below zero temperatures and really all that matters is the ice is safe for fishing.

My first adventure onto the ice in 2021, we decided to go to one of our old haunts in Farmington, IL to try our luck at a couple of strip pits. We arrived and started checking the ice and we had 4 ½ to 5 inches. Normally I really don’t feel comfortable on anything less than six inches but hey… it’s February and I haven’t put my line through an ice hole yet and I wasn’t leaving. Of course, my buddy Al Schackow seems to have no fear being on the ice as long as there is at least three inches. So, we continued down the lake checking every place we have tried in the past to locate some fish. After drilling over 100 holes we finally found a hole that had a few fish in it. We were fishing for four or five hours and only caught three fish amongst all three of us that were there. The fish just weren’t biting.

We used to have a spot over by Victoria, IL that was owned by a good friend that was great for ice fishing. I used to be able to give him a call in order to catch a few blue gill and crappie. Sadly he sold the property last year so that wasn’t going to be an option. We started make a few calls around to see if we could find somewhere to at least catch a few fish.

After talking with some friends, I seemed to be coming to one conclusion. Many people weren’t catching many fish during the day but were having great luck at night using a fish light. I have tried fishing at night a couple of times before without much luck. It seemed the more research and information I gathered fishing at night was the key to catching some fish if you’re willing to fish…on ice… after dark.

I did some research on the fish lights and found you could order them online at a pretty cheap cost. Of course, I waited until we decided to take this adventure so I had to pay a little more and search all over just to find a fish light. Once we had the light the only thing to do was test it out.

The next day rolls around and I get the call from Al. He stated, “Not sure what we are doing but I can’t sit around the house all weekend I will go nuts”. Well Al is that one friend that is always up for an adventure. I don’t care where or when he will be on board. We discussed heading over by Galesburg to try our luck at some night fishing and hopefully catch a few fish. The one challenge I see is, it’s supposed to snow 2-4 inches and the temperature is supposed to drop to -11 degrees which will make the windchill to -20 below that evening. I was pacing the house trying to decide if I was willing to go deal with the cold just to catch a few fish. After an hour or so of walking around the house my wife looks at me and says “It’s time for you to go fishing”. She really just wanted my butt out of the house and I get it I needed to get out as well. So I called Al and told him I would be at his house in an hour and we would be the two idiots that will go ice fishing with it being -11 degrees. I rounded up my ice fishing gear and loaded the truck.

The trip over to Al’s the only thing running through my head was you must be a little crazy to even consider this trip but here I am heading in that direction. I didn’t have a lot of confidence. I had fished this area a couple of times with really no luck at all. I picked up Al and we headed towards Galesburg. We were about twenty minutes out from our fishing location and here came the snow. It was blowing like crazy and within a few miles the roads were covered and looked like a sheet of ice. It took a little extra time to arrive and when we did, I saw several other people already out fishing. I thought to myself “we are not the only dummy’s wetting a line in these frigid temperatures”.

We exited the truck and started loading our sled for the trip onto the ice. We had our heater, new light and all of the gear an ice fisherman would need. We arrived at a location and I could see where that had been a lot of people on the ice in the last few days. I figured with all of the activity here than we might as well start punching some holes and see what the finders can locate. The first three holes showed no fish. The next three holes all showed fish from 22 – 26 foot deep. I looked at Al and said “out over 150 holes we drilled on the ice this year this was the first that showed a good concentration of fish”. We drilled our hole and set up the tent and were ready to fish. I had asked my friend Reagan Smith with Reag’s Guide Service, what he had been having success with through the ice. He gave some great information so that would be our starting point.

We got all set up, heater going, lines ready and we were ready to catch some crappie. It was around 3:00pm and our lines were fishing. It didn’t take long, and Al started catching a few fish. The bites were extremely light but if you could catch them on the nibble they were there. Al was catching a fish about every ten minutes and I was catching one every half hour or so. As any ice fisherman knows you can be using the same exact lures and for some reason there always seems to be one hole that catches more fish than any of the others. Unfortunately, on this day it was one of Al’s holes. It seemed like everything was starting to slow down around dark so we decided to put our new fish light to work.

We dropped the fish light down to 13’ and plugged it in. I started watching my screen on my fish finder and within a few minutes we had fish from 15’ all the way to the bottom at 26’. The fish weren’t being too aggressive, but we started catching fish more consistently.

As the night went on the people that were around us started leaving one by one. I knew it was getting really cold because the entire inside of our hut was complete ice. Inside the hut the temperature was great but you put your hands outside and oh boy! you realized that it was not going to be a fun night walking our and tearing down all of our equipment. I had to step out of the tent for a second to check the hole we put the light in and within two hours the light was frozen in the hole. I am like “Hell, I just bought this thing I am getting this out”. I chipped away until finally I got the hole open again and by the time I got back in the hut I felt like an icicle.

I looked at the clock and it was going on 10:30pm and we had over 50 crappies in the bucket. We decided we would fish until midnight and call it quits. Over the next hour and half, we finished filling the bucket and realized we had an hour or so of cleaning fish and it was time to go. We got everything straightened up in the hut and prepared for our adventure outside in these freezing temperatures.

As we walked off the ice, we realized the trip out was no where near as easy as the trip onto the ice. The temperature was so cold it made it hard to breathe. Of course, on our walk out I kept thinking “man I hope that truck starts. We are out here with no one around and with the temperature” …we couldn’t go without heat for too long. Walking anywhere didn’t seem like an option. As we pulled the sled to the truck, I tried to start the truck. Luckily, she started up but boy she didn’t act like to she wanted to.

After loading the truck, we were off. It took us an hour and half to get home because the roads were completely ice. Once we got home, we decided to leave the fish in the garage and clean them on Sunday.

We all have the one friend that pushes us to do things. Sometimes I moan and grown because Al doesn’t have an off button, but I must say the amount of fishing and hunting trips we have been on together and the amount of fun we have is something I cherish, and I always look forward to our next adventure.