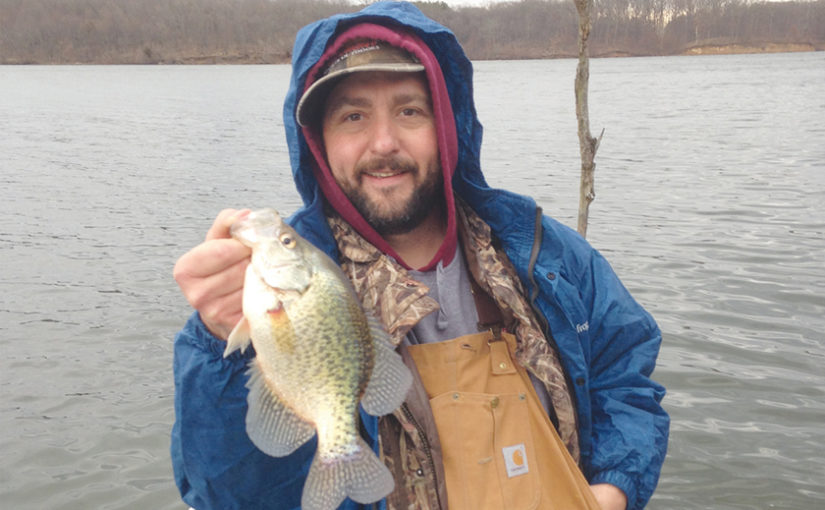 As I sit here in Mid-April, I am still wondering if winter is going to ever end. I have been waiting for warm weather to begin the mushroom season, but mother nature is being moody. It looks like in the next couple of days we will be getting some higher temperatures which should get the grey mushrooms popping in the next few days. At least that is what I am hoping for. I know many of the southern counties in Illinois are finding black and grey morels, but no one seems to be finding them on a regular basis.

A couple of months ago I received a call from Tim Hanuer in regard to the Heart of Illinois Crappie Club and the tournaments they hold throughout the year. Tim asked if I would like to come and participate in a tournament and take pictures and write an article on the club. To say I was excited to participate in a tournament would be an understatement. As you all know, I love Crappie fishing. I have always wanted to participate in a tournament but have never pulled the trigger and joined a club. Tim let me know that they would be having a tournament on Clinton Lake on March 31st and invited me to fish in his boat with him. As the date neared I watched the weather hoping for a little break to spend a nice day on the water. The days went by and the temperature for Saturday March 31st was going in the wrong direction. They were calling for a high around 42 with winds that would be 15 – 25 sustained wind with 35 mph wind gusts. I have been on Clinton a couple of times in a smaller boat where it was not fun trying to get back to the ramp. As a matter a fact, the reason why I purchased another boat a couple of years ago was because if you get caught in those type of winds on a lake like Clinton Lake it can be quite dangerous. Especially because all I had was a 16ft Triton duck boat that was a flat bottom and it would absolutely destroy your back trying to get across those big waves.

So, at first I was a little nervous thinking about the waves on the lake but Tim had a nice deep V boat that was made for these types of conditions. We met up at a local restaurant on Saturday morning and headed for the lake.

I really had no idea what to expect and had lots of nervous energy. As we drove over to the lake, Tim and I got to know each other and discussed family, fishing, and the outdoors. It was like we had been friends for years. That is one of the things I love most about meeting people with a common interest in the love of the outdoors. You can meet someone and feel like you have been friends for years. We talked and laughed and discussed the strategy we would be using during the tournament. Tim’s first thought was we would do some spider rigging but after realizing the wind was going to be too much for that we decided that minnows under and bobber would be the best approach. Of course, my favorite way to catch Crappie is with a jig and nibblet so I had one poled rigged with a minnow and bobber and the other was my go to chartreuse jig head with red sparkle and chartreuse skirt tipped with the chartreuse sparkle nibblet. Everyone has their go to when crappie fishing and I have heard many color combinations over the years that seem to work best for other individuals but for me I usually start with the same colors and adjust from there. Many times, I will change to multiple color combinations until I find which bite is the best. As Tim and I discussed where to fish there was one thing for sure, find a cove with some structure that would be semi out of the wind.

As we launched the boat and began to make the ride to a cove the Tim had luck in previous years the wind was not too bad. We arrived at the cove and sure enough there was a nice school of crappie at the entrance to the cove. We searched the cove for other schools but came back to the biggest to begin our fishing. We definitely weren’t slamming them, but we were picking up a couple ever 15 minutes to a half hour but we couldn’t quite find the 9inch plus crappies we were looking for. It seemed when we measured the fish, many were between the 8 ½ to 9-inch mark. We continued to put a few in the boat with a couple of keepers. As the bite slowed down even more the wind really started to pick up so we decided to go to another cove to see if we could find some slab crappie. As we took this boat ride I felt like the Michelin Man. I had so many layers on I could hardly move but I was warm and that was the most important part.

For the first time in a long time I wasn’t running the boat and that probably made me happier than anything. I was able to have my rain gear on and face the back of the boat so as the waves splashed over the front of the boat it was just sliding off of my rain gear. I was watching poor Tim and he had waves of water just running down his sides as he tried to get us to another cove. I must be honest, the whole time I am thinking this guy is going to be soaked and miserable, but he didn’t complain. He just wiped off his glasses and trudged on. Once we got to the new cove we marked a few fish with the finder and began to start fishing. It wasn’t long before I caught a fish that made the 9-inch mark so I was finally contributing to the team. In this tournament you weigh in your 7 largest fish. One thing I liked about the tournament is that you could fish and keep your limit so you had a few fillets to go home with that afternoon. Unfortunately, we didn’t get our limit but we had a great time trying. As we sat in this second cove I started to use a chartreuse grub with a curly tail to see if could entice a bigger fish to bite. Low and behold I hooked into a nice fish. As soon as I set the hook I knew it wasn’t a 9-inch fish this was something that had a little weight to it. As Tim grabbed the net we landed a 12” Crappie that weighed in at 1.41 pounds. This is exactly what we were looking for. Unfortunately, it would be the only one of that size we would catch.

By the time we caught this fish we only had a couple of hours left in the tournament so after trying to catch a couple of more big ones we decided to head across the lake and try our luck in a cove on the other side of the lake. I was totally fine with it but on the other hand I kept thinking Tim is going to be so water logged after this ride he will be ready to put the poles up and look for a place to get warm. As we trudged to the next cover we didn’t get many bites so we decided it was time to get closer to the ramp, so we could fish until we had to arrive back at the dock at 2:00pm.  I did catch one more keeper on our last stop, but we didn’t have the 7 fish we needed to make a run at the top spot. As time neared we loaded up the gear and headed to the docks. Once we got there we loaded up the boat and headed to the parking lot. I was amazed at the amount of people who were there to fish even with the bad weather conditions.  Many of the fisherman stood around talking about their day and how they are fishing, where they fished and how things changed throughout the day. This was one of my favorite parts of the day. These guys are a wealth of knowledge and if you listen you will always learn something. One of my main reasons for coming to this tournament was to learn. You are never to old to learn something new and each time I go fishing I feel like I learn something. Now if I could just apply it all… that would be great.

As all of the boats were pulled out of the water and ready for weigh in. As several of the boats weighed in their fish and also their big fish for the tournament I realized there was a chance my fish would win big fish. I was actually getting excited and our turn had come to weigh our fish. We knew we didn’t have the winning catch, but I was curious on how much my fish weighed. After weighing our fish for the tournament, we pulled out the largest fish to be weighed. At this point there was a couple of fish that were weighed in at 1.25 pounds and I figured that was around what my fish weighed. To my delight my fish came in at 1.41 pounds and was in the lead for big fish with only a couple of more people to weigh in. As the second to last boat weighed their fish they pulled out a Crappie for their big fish weigh in and I knew it was going to be close. After that fish was put on the scale and they said the fish was 1.43 pound. So close but yet so far away. At the time I thought I had the second biggest fish and I didn’t realize that the last group that weighed their big fish and it weighed 1.46 pounds. So, I ended up with the third largest fish and was really happy about that. For those of you who have never fished a tournament it is something you should try at least once. The camaraderie with the guys was amazing. The guys participating were extremely nice and treated me like I had been fishing with them for years. So, don’t be nervous about entering a tournament. Just find a friend who loves to fish as much as you do and go give it a shot. I have added the Heart of Illinois Crappie Club Tournament Schedule to this article and if you want to join just give them a call. Hopefully I will see you at the next tournament.

May your sunrises and sunsets be magical.