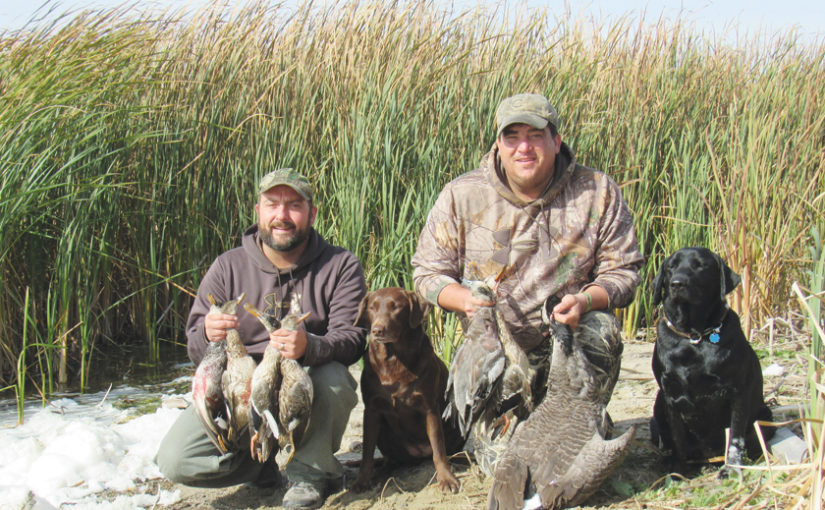 Oh boy do I have an adventure to tell you. As many of you know some friends and I head up to North Dakota each year for our man-cation. Yes we do try and do a few of these each year and this has been a staple for 10 year now. We started out in the southern part of North Dakota 10 years ago by accident. We had a placed lined up and it fell through so we just kept calling placed until we found a place to hunt. Luckily we found a spot and for the most part we have had some great hunts there. For several years one of my friends Craig Overcash has wanted to head farther North. I was not really feeling the idea. I knew we could go where we have been going and harvest a fair amount of ducks and in the process we have made many friends in the area. It had become really easy for us to make a phone call and have our place to stay. Make a few calls and we had thousands of acres to hunt but there were a few factors that were changing the landscape. The first year we were there water was everywhere. It seemed every field had water in it and every ditch along the road was full of water. Each year we have witnessed less and less water and a lot less habitat. Actually considering the amount of water 10 years ago compared to now there is more the 40% less water. Many of the sloughs we hunted just didn’t exist anymore so we were working harder and harder each year to stay on ducks. As this year rolled around Craig was dead set this was the year to find a place farther North. So I basically said this is your year. You find us a place to stay and I will give it a shot. I have been considering this to be my last year going at least for a couple of years but I thought it maybe time to experience something different. As the time neared Craig worked constantly to find a place and low and behold he found us a newly renovated house on a lake and a very decent price. I was pretty impressed. Since Craig took the lead on the location and I asked Tim if he would drive his new truck instead of me taking my truck up there for another year…This was going to be an unusual year for me. Normally we drive 11 hours and I drive the whole way usually pulling a trailer. Not this year I am going to sit back and enjoy the scenery and let Tim pull the trailer. Normally I make sure that our trailer is in tip top condition. If I even think the trailer needs tires I put them on and every year I have the bearing repacked to make sure we don’t have any issues. As Tim can testify I called him daily to make sure everything with the trailer was is order and was getting taken care of. As he promised he made sure we had newly packed bearing and was ready to go.

Now comes the interesting part. We started off at 12:30am on Thursday morning and started our road trip. Tim took the first few hours of the ride and then I took over for a few. As I looked back at the trailer, I realized the tire seemed a little bent out. We were not far from our next stop, so we continued and when we stopped for the next gas stop I checked it out and the hub wasn’t hot so I just kind of let it go. After 12 ½ hours on the road and only hour and half away from our destination a young gentleman pulled up next to us and said something just flew off our wheel. Well I didn’t take me long to realized what the heck had happened. Now we have to pull over and we are luckily in a major town or this could have been extremely ugly. I knew as soon as I looked at it this wasn’t going to be a quick fix. So, after being up all night I wanted really just wanted to look at Tim and scream but guess what? He wanted me to scream so he could scream back. We were both just exhausted and frustrated. We finally put our heads together and decided I would find a UHaul place to rent a trailer and Tim would find us a trailer place that would fix the trailer and call a tow truck. Somehow, thank the hunting gods, from that point on everything went smoothly. We arranged for a tow truck to take it to the repair shop. Luckily in North Dakota there is a lot of trailer sales and service. We went and got a UHaul went back to the trailer unloaded the trailer into the UHaul and waited for the tow truck. Once the tow truck was there and leaving we headed for our final destination. We arrived, we unloaded the trailer and drove and hour and a half back to drop it off. We finally ended our night at 10:00pm. Boy was I cranky.  FYI – had to have an entire new axle put on the trailer.

Well after that debacle was complete we had a wonderful time in North Dakota. Al was catching his limit of Northern each day and we were eating ducks and fish more times than I can count. The week started with 60-degree days and sunshine, but that changed after the first two days. Soon we had 2 inches of snow, high winds and 23-degree temps. It sure was a change I wasn’t expecting but I wouldn’t change it for the world. We never hunted the same place twice and we harvested our limit each day. As I said before I thought this was going to be my last year but after the amazing hunting and a great time with my best friends its going to be hard not to go back for an 11th season. If you have been going hunting in the same place for years take a chance on trying something new and you might just get to experience something unforgettable. I big thank you to my besties for a great week in North Dakota. I have some of the best family and friends and guy could ask for.

Stay tuned, Ella Bella will be hitting the deer stand to try and harvest her first deer. To say she is excited is a vast understatement. Take your kid hunting and fishing the memories will last a lifetime.