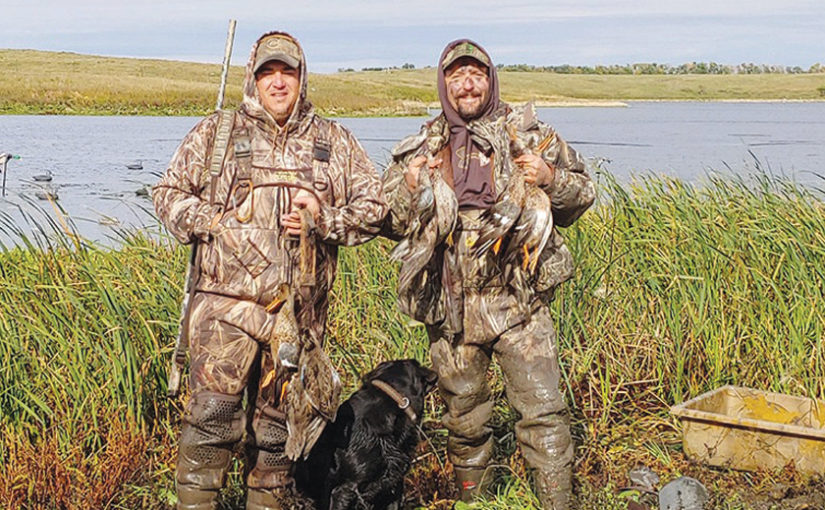 October marks our annual trip to North Dakota. This is the 12th year we have been up to the great state of North Dakota. Last year we decided we needed a change, so we found a place a couple of more hours north of our normal places to see if we had better luck. We had always gone to the south east corner of the state and had fairly good luck, but we wanted to head north and see if we could get into some mallards and more geese. Over the last five or six years the southern part where we use to go was getting more dry each year and if we continued to go there, we knew our chances were becoming more and more limited. It was a great decision! Last year we shot limits every day and stayed at this beautiful place on a lake where we could catch some northern pike in our spare time. It worked our perfectly. Everyone had great expectations for our second year farther north, but you just never know until you arrive and start scouting. The one thing about North Dakota if you’re not willing to put miles on your vehicle to find concentrations of birds than you might as well not even go. We usually put over 1,000 miles on just scouting. Of course, once you know the area and have been there several years you won’t add the miles quite as much.

We decided to leave on Wednesday evening this year in order to drive through the night and arrive around noon on Thursday. This allowed us to do a little extra scouting on Thursday evening. As Friday morning arrived, we were all like little kids in a candy store. We couldn’t wait to find the motherload of ducks and start our season off right. We scouted our normal haunts and found several nice groups of birds, but we weren’t seeing as many as in 2018. We did see a lot more geese this year than in the past so we knew if we could get on the spot, we would have a great week. Once scouting was finished, we decided on our opening day location and we were ready for it! Opening morning arrived and we were jumping around like baby bunnies ready to hit the water. We arrived at our spot, set the decoys and before shooting time we were getting buzzed every few seconds. If that doesn’t get your heart pumping, I don’t know what will. Shooting time arrived and the shots started ringing out. Everyone was shooting the only issue we had was there wasn’t many birds hitting the water. I couldn’t hit the broad side of a barn. I was using a new shell this year and I didn’t pattern the shell through my gun. Unfortunately, three of the four of us had purchased the same shell and we all couldn’t hit crap.  It was driving me crazy and I thought well maybe its just opening day and you haven’t shot anything flying in awhile to I gutted it out and finally finished my six-bird limit. Al was able to get his limit but the other two didn’t fare so well. They only had a couple of birds a piece. Not something that usually happens opening day, but things can’t go perfectly every time.

After opening morning, we scouted our next location to hunt. In the early afternoon it started to rain and blow like 25mph. As the day went on it just kept raining harder and harder the wind kept blowing more and more and I kept thinking “I hope this calms down before Sunday morning”. As I lay in bed Saturday night, I could hear the rain and wind it was relentless. We woke up on Sunday morning and it was a monsoon and blowing up to 30mph. It was the first time in 12 years that I decided I would sit this one out. Tim has glasses and he couldn’t see to shoot a duck if he wanted to. Unfortunately, the rain really changed our whole week. We had at least four or five spots picked out to hunt but they were all down low maintenance roads and even with four-wheel drive you weren’t getting to them. We had to rethink our plan for Monday. Tim and I headed to find a location to hunt and we came across a small slough off the side of the road that would be easy to get to and had a 100 or so gadwalls on it. This would be our Monday morning hunt. We thought since we didn’t get out Sunday morning we would try and afternoon hunt on big water. Well that was an adventure with the wind and rain. Once again, I felt like I couldn’t hit the broad side of a barn and Tim was having more trouble than me. After way too many shots I had my limit and was ready to head out. Tim had three and didn’t want to try and stay to finish. It was cold rainy and pretty miserable, but we come up here to hunt and sometimes the conditions aren’t perfect. After this hunt I decided I had to get some different shells. I took a few shots trying to pattern the shell and this shell held a pattern like nothing I have ever seen. At 30 yards my pattern was only a couple of feet wide and looked like six feet tall. I decided to trade a couple of boxes with my buddy to see if it would make a difference the next morning. We woke up early on Monday in anticipation and of course it was still raining and blowing. Not as hard it was probably 15 to 20 mph winds and a light rain but there was no way I was missing another day. I don’t care if it was a blizzard… I was going. So, Tim and I loaded the truck and off we went. We arrived around 7:00am shooting time was 7:17am and we set our decoys and got ready for action. We didn’t have to wait long. Shooting time arrived, and a beautiful pair Gadwalls dropped into our decoys a couple of shots and two birds were on the water. As Cocoa was retrieving those two, in dropped three more and none of them flew away. The Gadwalls just continued to rain into the slough and not many were getting out. We had our limit in less than fifteen minutes and we were back at the truck getting dry before 45 minutes of shooting time had passed. I thought to myself “did the shells make that much difference or just easier shots”? As the week continued it definitely was the shells. So much so that when I would try and shoot the one brand it would miss every time. I would put in some Heavy Steel and the birds would just start dropping. So unfortunately, I have over a half case of these other shells that I will never use. If you going to buy a new type of shell, please just buy a box and pattern it with your gun. It seems every shell is different and if you have the wrong one than you’re not doing yourself any favors. I made that mistake once and I will never do it again. I will stick with what I know shoots best out of my Versa Max and not try to save a few bucks on shells.

As our week continued the rain turned to snow and we received about two inches one night. I always find it hard to believe that on the first day of October you can be getting snow. Last year was three inches on the 3rd, this year was 2 inches on the 1st. We hunted several new places this year and we had a pretty good year. We would have done better but the last couple of days it seemed the birds just didn’t fly. After opening day, we didn’t see the sun the rest of the week and it rained pretty much daily and some days, all day long. I feel bad for the farmers up there. Many of their wheat fields were not harvested because it became too wet and rotted. Now today as I write this, they are having a winter storm with 4 – 8 inches of snow and there crops were not finished growing. So, our thoughts and prayers go out to the farmers that are being affected by this crazy weather across the Midwest. Farmers are America’s backbone. When they do well, so do many others. So let’s hope they can get some assistance and get back on their feet in 2020.

Until next month, may your sunrises and sunsets be magical!