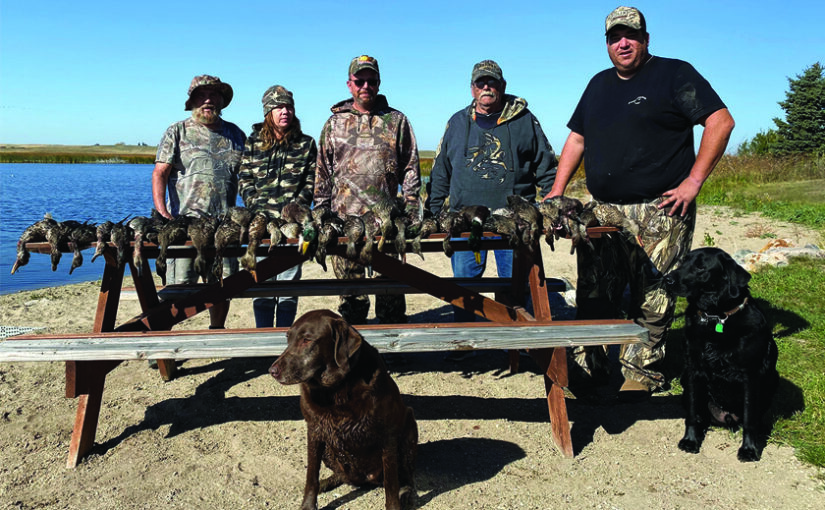 Well, I don’t even know where to start telling you about this month. You all know the first week of the month I spend in North Dakota. This year I seemed to be more excited than normal. As the weeks passed by and the countdown began. I delivered the October issue dreaming of the following week. I must say during my route my gut started to turn with each passing minute. Why you may ask? Well, I stopped by one of our long time advertisers Duck’s Tire Repair in Summum, IL and I knew he would be preparing for a trip up north as well. I was excited to talk to him because I knew he would be excited as well. As I entered the door Duck was sitting on a chair in the office. I said, “Are you ready for North Dakota?” Duck stated, “We canceled our trip.” “Why did you do that?” I asked. He stated that there was a blue green algae outbreak in North Dakota and no one wanted to take their dogs up there and potentially make them ill or even cause death. That is when the stomach started turning. My Cocoa girl is a part of the family and there is no way hunting ducks is worth her getting sick or even dying. There is also no way my chubby butt is chasing birds in the mud. So, I have a predicament. Do I go? Do I cancel? What is my next step?

After thinking about this the rest of the day and on into the next I decided I needed to call a few of my northern contacts and see what they say. I first did some research online to see where in North Dakota these algae blooms have taken place. I did see where gentlemen lost his golden retriever to the algae and a couple of more had become sick. There we several locations in the state where the algae blooms have taken place. There was none within 100 miles or so of our location. I decided to make a few calls and when I talked to one farmer, he stated that they haven’t had a blue green algae outbreak in their area but did say he knew someone a few hours south who had an issue. He did say if you see a slough or body of water that has been fenced off all the way around that there is a good chance, they are keeping the cattle out of there for that reason. He stated he hadn’t seen any algae that resembled blue green algae. After the conversation and online web search I decided we would continue with our plans to go to North Dakota but each piece of water I was going to be on, I was going to inspect before Cocoa was able to hunt there.

After our 15-hour drive north we were ready to find some ducks. We knew coming up this year that it had been very dry and many of the potholes may not be there. Well once we arrived, we realized just how dry it was. I would say more than 75% of all small potholes were gone. Even larger shallow lakes that I thought for sure would remain, were completely dry. We spent our first nine years hunting the southern part of North Dakota and we watched it get dryer and dryer each year. In our final year in that spot, we just didn’t think there would be any huntable water left in that area. Now we are in our fourth year in the northern part of the state, and it has gotten drier each year. Hopefully this winter they will get some normal snow fall and fill the potholes back up for the breeding duck’s next spring. Otherwise, I am sure another dry year will eliminate a large part of the remaining water.

After searching all day Friday trying to find a concentration of ducks to no avail, we settled on a couple of areas that had few hundred ducks. One thing that is new to North Dakota this year is the Electronic Posting. For as long as we have been going up there it was always if it’s posted, call and get permission. If it’s not posted, you are free to hunt. That is not the case anymore. North Dakota has teamed up with On X Hunt and have allowed residents to post their land electronically and not have to go to the task of putting up signs. It also used to be they had to put their name and phone number on the sign. Now they only need to put their name. If there is one thing, we are not afraid of, is knocking on doors and if you are not willing to do that I am not sure North Dakota hunting is for you. Things have changes. You can’t seem to find the phone numbers of the individuals to get permission. You basically have to find where they live and hope to catch them at home. We were lucky we had few contacts and they assisted us with a few more names and numbers that helped us secure permission to a couple of posted lands.

One of our friends in our group, had a friend who was coming up with four guys the same week we were going to be there. This group waited to come up on Saturday and planned to hunt Sunday – Thursday. They had several state areas they have hunted in the past or they hunted non posted land. This year when they arrived, there was not the number of birds they usually have in the area. This group was worried about the electronic posting. They never did find any concentration of ducks to hunt. Half of the group hunted Sunday and Monday and went home. The others in the group hunted Sunday – Tuesday morning then went home. One of the gentlemen said they shot ten shells in three days. I really felt bad for the group. To drive fourteen hours one way to hunt ducks, you do not want to leave three days later and not even have a shot a box of shells. The reason I tell you this, is if you are going to take a trip to North Dakota you better be willing to put miles on the truck, call as many farmers as you can and stop by farmhouses to get permission or it can be a rough week.

This was just a unique year in North Dakota but that didn’t stop us from shooting ducks. We even had a few geese, and one member of our group was able to get a couple of Sandhill Cranes his last afternoon. We had to scout a lot more this year than in the past, but we found a few concentrations of ducks and the bright side there was a lot more mallards than we normally see. We usually see a lot of Gadwalls, Bluewing Teal and Red Heads. This year was the year of the Mallard, Greenwing Teal, Wigeon and Pintails. We hunted hard and ended up harvesting ducks each day. It seemed like we ate a lot of ducks day after day but boy its all worth it.  I love North Dakota for the number of birds, number of species and the friendliness of the residence. The people we meet in North Dakota have always treated us very well. They help make our trip a success year after year. Always grateful to them.