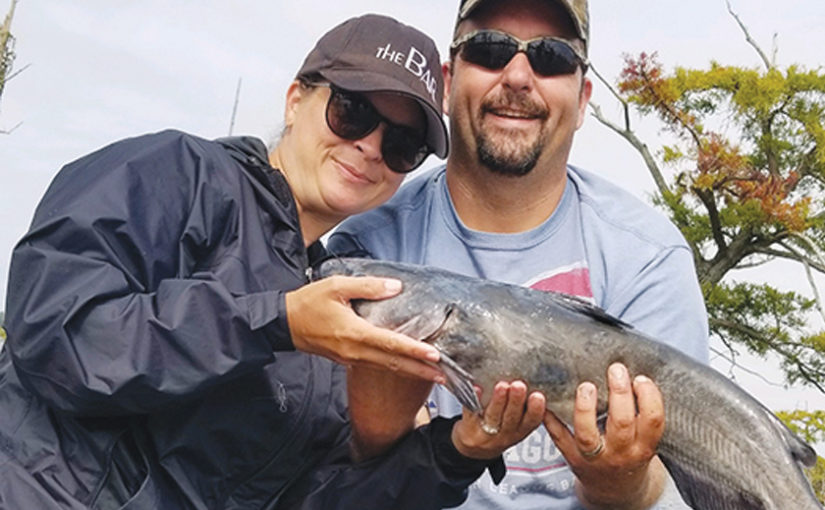 It’s that time of year where for some reason I think I have to plan all of my trips between the first week of August and the last week of September. I may need to learn to space them out a bit. After returning from our wonderful Wisconsin trip, we decided that at the end of the month we were going to head south to the great state of Tennessee. For the last couple of years, we have been going down to Reelfoot Lake in Tiptonville, TN and staying at Sportsman’s Resort. They have a great $99 special that they run in August and November and if you like Catfish you need to be there in August. Nothing quite like it. This year was a going to be a little different than the last couple. The first year we went down to film a TV show for our local PBS Station and last year the reason I really wanted to go back was for my wife Leah. She loves to fish, and I think she likes to catfish more than anything, so I was excited for her to go. Unfortunately, her best friend decided to get married and the bachelorette party was that weekend. So last year didn’t work either. This year we made sure she would be available to go and the next thing I new we had around twelve people who wanted to go. All good and dandy but our normal small groups of six to eight were usually enough. By the time it was all said and done I believe we had an Adventure Sports Outdoors Travel Brigade. We ended up with seventeen people on this trip.

I was excited to get this trip started even though I was watching the forecast and it looked like rain overnight and into the first morning and not just a half inch or so… it was a dumping! While watching the news that first night it said there was a location just west of us that had over six inches of rain over the last couple of days. I had this sinking feeling in my stomach thinking “I have 17 people here ready to catch fish”. I should have taken stock out in the catfishing bait we were using. We had over 20 gallons of bait and wasn’t sure we were going to get on the water or if the fish would even bite. The water levels were pretty high, but they had been up for most of the year. The last two years we were there it seemed you hit a stump every ten feet. This year you could just go and not ever hit a stump due to the higher water. It was like two different lakes. I thought we were going to have some trouble catching fish but that just wasn’t the case. Now, we were not catching a fish every ten minutes like past years, but we were still catching a few per hour. Considering how bad the conditions were for fishing over the time we were there… I think we did fairly well. We still caught around 100 fish over a couple of days of fishing. All in all, a very successful trip.

One of the things I enjoyed most about this trip was we decided to explore one day. Reelfoot lake was formed by an earthquake many years ago and there are four basins. We were looking at the map and noticed a channel that would take you from basin to basin. Since the water was high this would be a great opportunity to explore outside of our normal range from camp. So, on Friday we decided to take the journey through the canals and see if we could find a hot spot for fishing. As we entered this channel it was clear this was an environment I have never been in before. It seems like we are going down the bayou in Louisiana. That was the only way I could explain. Cypress trees that are hundreds of years old and this winding canal was a couple of miles long. Every once in a while, you would get to an open area and there would be a small lake on either side of the channel that was full of Lilly pads and usually a duck blind or two. The wildlife was incredible, huge birds, turtles and even a cotton mouth scaring my wife. After figuring we were too far away from camp, we saw a channel go into another basin and we figured we have come this far we might as well go fishing. We entered this new basin and it was cypress trees in eight foot of water as far as I could see. We decided that is where we would fish, and we caught a couple of fish just about everywhere we stopped. We didn’t see a sole the whole time we were out there, which was fine by us. So next time you think the rain or weather is going to hurt your fishing trip. Maybe there is someone from above saying to go explore new lands and let your spirit be free. I really appreciate everyone who accompanied me on this trip, and we will see what new adventure we will put together in the future.

If your looking to plan you trip to Reelfoot Lake Tennessee be sure and give Candy and Bill a Call at Sportman’s Resort 731-253-6581. Their ad is on page 14.

Until next month, may your sunrises and sunsets be magical!