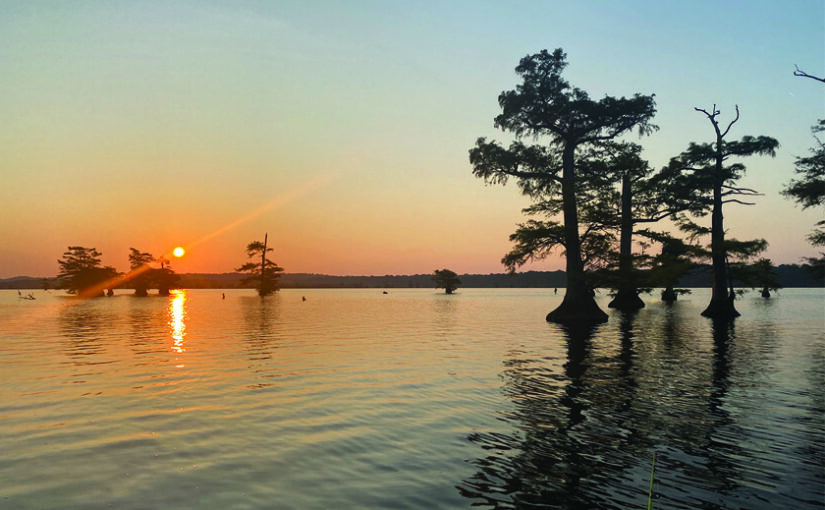 Man am I excited! The leaves are beginning to turn and as you are reading this, I should be about ankle deep in some mud in North Dakota.

As August was winding down, it was time for the group to head down to Sportsman’s Resort on Reelfoot Lake in Tiptonville, TN to do some catfishing. I love this trip for a couple of reasons. Normally my wife is able to go with me and she loves to catfish. That is reason number one. Sadly, a week before leaving Leah had something come up at work and had to cancel on me (I cried a lot). The second major reason I enjoy this trip is you can catch a lot of fish easily and with not much effort. My grandparents love to eat fish and this trip always provided me with plenty to fill their freezer for winter. Making sure they have all the fish they need is something I take pleasure in. They spent many years teaching me the way of the farm and the outdoors so the least I can do is make sure they don’t have to buy any fish or wild game. Although I am not sure how a 89 and 98 year old go through so much fish but I will keep their freezer full.

We arrived on Thursday and as usual, my buddy Al is chomping at the bit to hit the water. I am more relaxed on the first day. I like to get there; get everything put away and sit back and enjoy the view. I really don’t like smelling like stink bait the first day so I let them go after the fish.

Al and Stephanie decided they were heading out to do some fishing. They loaded the boat and off they went. After a couple of hours Al’s wife Guylaine says to me “s I received a text that read “sos send tow boat””. She looked at me and said “You think he is joking?”. I was like hell no he isn’t joking. He probably flooded the dang thing and can’t figure out how to get it started. I knew this was an opportunity to give him some crap, so I asked Tim to join me on our rescue mission. We started out and I could see Al and Steph a little ways down the lake so we headed to give them a lift. Poor Al had been paddling for an hour and looked like he was a whipped dog. Shirt was off. Sweat rolling everywhere and he only had one beer left so things we getting very dire. I am sure he doesn’t want this story told or the picture to go with it but lets get real. That is good comedic content. As we pulled the boat up to the dock, he went to get Bill to see if he could fix it. Bill and Candy Curlin are the owners of Sportsman’s Resort and absolutely great people. Anyway, here comes Bill down to the boat. He gets in the boat. Hits the release on the left on the Mercury motors and pulls one time and off she goes. I was dying laughing thinking Al just spent the last two hours dealing with the boat and it was as easy as one push and one pull. Life is good.

The last few times we have been to Sportsman’s Resort in August we have had beautiful weather and the first two or three years it was very cool for that time of year. This year was a little different. The temperature were getting into the 90’s and there just wasn’t enough wind to keep you cool. We still caught plenty of fish over the three days we were there but not quite as many in the past. We had two years where we caught over 100 fish. This year was probably half of that but there is not many places you can go catfishing with that type of scenery and such a unique lake like Reelfoot Lake. I really look forward to going back in the spring and get ahold of the some them monster slab crappie they have. Some of the bluegill there look like a pie plate. If you’re looking at going to Reelfoot there are several places to check out. Sportsman’s Resort (731) 253-6581 or check them out on their website www.reelfootlake.com.  Another option is Boyette’s Resort (888) 465-6523 or check them out on their website at www.boyettesresort.com. Another great source of information about the lake and events happening on Reelfoot is to check out www.reelfoottourism.com.

Once I returned from our fishing adventure it’s time to put the fishing poles away and start getting duck decoys ready. Not sure why but I feel the need to buy more decoys every year and still only take a dozen with me to North Dakota. This year I wanted some new teal decoys to take with me as well as try to harvest a few Teal during our season. After picking up the decoys I grabbed some Texas rigs and also purchased another Hilrod from FNS Products. I am telling you if you use Texas rigs on your decoys and don’t have a Hilrod you’re missing out. Makes it so much easier to transport your decoys. Forget the bags just check https://fnsproducts.com/ out and buy you some Texas riggs and life is so much easier. I think we have four or five now and if I buy more decoys, I will buy more Hilrods.

Opening day arrives and Al, Cocoa and myself set out for what we were hoping to be an exciting opening day. We arrived at our normal location and it was obvious our neglect of the duck grounds was not going to make it easy to hunt. We fought beavers for as long as we could and after trapping season, they just took over. We were never able to get it dry enough to mow so our foxtail grass was over three feet tall. We finally managed to find an area with a little open water. So, we set up there and readied for the opening shot to ring out in the river valley.

After a half an hour or so we had only heard a few shots. We saw all kinds of Wooducks. They were dropping in the decoys like crazy. Cocoa would look at the ducks and look at me like what are we doing here? Cocoa doesn’t have a lot of patience so I thought she would take off after them once there was a half dozen or so but she stayed steady and waited like she should.

At about 8:30am we heard shots ring out on the river. It sounded like a group was coming down the river. After a few minutes, the shots stopped and up over the hill came large groups of teal. We easily saw 300 birds in groups of 20 to 25 dropped over the hill and straight into an area I used to hunt. Unfortunately, I can’t just walk over there like I used to but boy, if you would have been on the lake that day you would have had quite a show. After another half hour or so, everything went quiet and we never saw another bird.

On Sunday, we thought we would have a good chance to get a few since we saw so many the day before. We had three of us there and we waited until it was too hot to sit in waders and we called it a day. So opening weekend of Teal season produced a big zero but we still have two more weekends left. We will see if we get a good Teal shoot in or not.