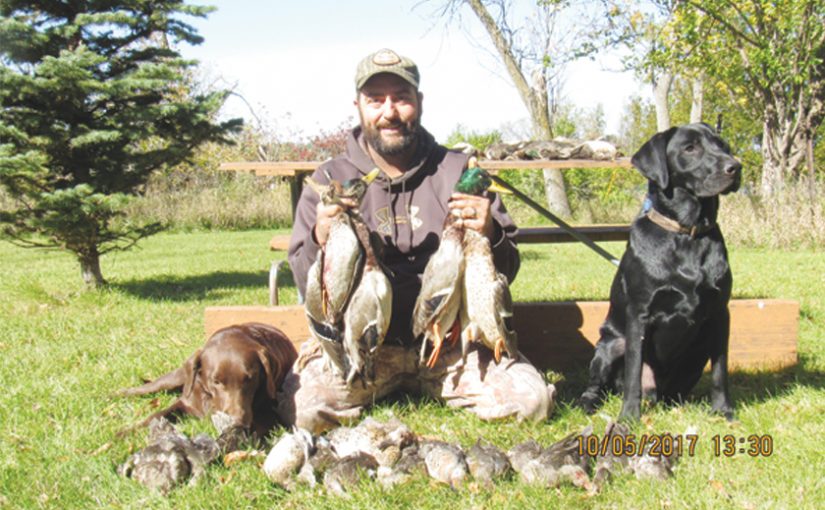 What a magical time of year. The temperature fluctuations, the turning of the leaves & that golden autumn glow at dawn. As outdoorsmen this is our favorite time of the year. We are so focused on making sure our deer stands are in the right place, the duck blind is brushed and ready for season and trying to get our last fishing trip or two done for the year. It seems like there is no time to sit still which is exactly the way I like it.

For almost a year now Mike O’Bryan and I have been trying to get together to do a little fishing on this paradise he calls Irish Acres. On a monthly basis I get to see many great pictures of Mike and his friends with crappie, bluegill, Muskie and bass. This lake seems to be a diamond in the rough and to say I would like to fish it was an understatement. Sadly, schedules always seemed to be in the way or it was cold and rainy and we just couldn’t seem to get there. Well Mike dropped me an email saying the crappie bite was on and he was wanted to see if me and the wife would like to go catch a few fish. We decided to take a beautiful Sunday Morning and go catch some fish.

We arrived around 8am and Mike had the boat ready and Rocky (his yellow lab) was anxiously awaiting the arrival of his new friends. Mike gave a tour of the beautiful facilities he has on the property and let me tell you it was a great place and set up perfectly. Once we hit the water we stopped by the first brush pile and it sure didn’t take long to start catching some crappie. If you read my articles you know I love my crappie so I was super excited. I look over at Leah and she has this big smile on her face, Rocky is guarding our fish so they don’t get out of the live well and Mike is sitting there enjoying the beautiful morning. That is what life is about. Making new friends and catching fish as fast as we can throw it out there.

I must admit, I believe the wife out fished me. At one point she decided to change to a pink and chartreuse tube and she caught a fish on nine casts in row. I have to admit, I’m the luckiest man alive to have a wife that enjoys fishing, maybe even more than I do. (Yes, she reads this)  We fished for around three hours and we stopped keeping fish after the first hour and a half and I am sure we boated over 100 crappie that morning. It was a great time with great guy.

Now that I had my crappie it was time to start thinking ducks. I was only a couple of weeks away from our annual North Dakota trip but first I wanted to get Ella out teal hunting. The last three years we really haven’t had any teal on our club so expectations weren’t high. We did decide to flood early because we were sick of fighting the dang beavers and also it was so dry. After talking with my friends no one seemed to be up to go hunting and I didn’t know if I should take Ella if there was nothing to look at. I decided to go that Saturday by myself. It really wasn’t bad. Saw quite a few teal and I was able to convince a couple to come within range. Of course, after calling my friends everyone was up to go on Sunday. Our group met out there early and I showed them where they were landing. Ella did join me for this adventure. This kid always makes me smile. She loves to spend time with me in the outdoors and nothing make me happier. Unfortunately, Ella and I were not on the right location Sunday. But we were able to watch the others harvest a few ducks and just sit and  talk with her as the sun comes up is worth its weight gold.

The time has come for the annual trek to North Dakota. This is something I look forward to every year. What is amazing for me is, it’s not all about the amount of ducks we will see or harvest. It is so much more.  See, this was our 9th year and we really have made several friends in North Dakota and it has become as much about the relationships we have made as it is the hunting. For months, I have been watching their weather and it has been identical to ours. The only difference they had less rain then we have had. Nine years ago when we first made this adventure we had water absolutely everywhere. There were bean fields, corn fields and wheat fields completely flooded. Everywhere you looked there was water. Never in my life had I seen anything like it.

When it came to our second year we were thinking we had this all figured out but when we arrived there was no water in the same locations that were waste deep just 12 months ago. We learned real quick that where you hunt one year will most likely not be a place you hunt the next. Now in the ninth year when we arrived there were sloughs that where 20 plus acres large that were dry as a bone. I knew this year was going to be unique. No snow to speak of for the last three years, no fall rain in 2016 and no rain all summer long. After talking with some locals we realized conditions had been much worse just a few weeks before we arrived. They were telling us that most pot holes and sloughs had dried up. Farmers had been mowing cattails and many had tiled the location that use to get wet for when the rains come.

Two weeks before we arrived, they received a couple of hard four inch rains plus a few other 2 inch rain that started to refill some areas. There is no doubt I was nervous about scouting day. Me and my buddy Al always go up a day early to find the birds and make contact with our friends. As we were driving around trying to find the birds we knew it would be a tough year so we needed to put a few extra miles on to find a concentration of birds to hunt. As always we found of couple of new spots that were 30 to 40 miles out of our normal area. It was actually State ground that anyone could hunt and it was just loaded with green wing teal, mallards, wigeon and gadwall. Only problem is big water and no boat allowed so you have to be on the spot or you just watch them fly all day.

Once we decide on three locations to hunt we head to talk to our good friend Bill. He is the first person we stopped and talked to in North Dakota some 9 years ago and I always look forward to the visit. I will never forget driving down this road and all of the sudden it ends at his house. My dad is in the back seat saying “if you go up to the house you’re going to get shot.” I said “Dad, this is not Illinois, how else are we going to meet people?” Dad wanted no part of this. He said you boys go ahead and I will wait in the truck. I tried to talk him into it but there was no way he was going to that door.

As Al and I walked to the door I was nervous. I didn’t know whether someone would bring a gun to the door, start yelling at me or what the heck was about to happen. As Bill came to door, he opened the door and said come on in guys. We introduced ourselves and Bill introduced his wife Charlene and we began to chat. He started calling the geese flying rats and no one around here likes them. Kill all you want just don’t shoot a pheasant. Fair enough.

I figured this was about the end of the conversation when Charlene whips ups some cinnamon rolls and puts them in the oven. Next thing I know she is filling us cups of coffee and Bill looks at me and asked if we were staying. After I told him yes, he grabs his plot map and starts looking for areas he has seen ducks and geese. To top it all off he picks up the phone and started making phone calls. He was calling people to find locations to hunt. This would never happen in Illinois. It’s really sad that we can’t feel the same way in Illinois. I must be honest I have tried to get permission to hunt on many places in Illinois and usually the results end the same. Unfortunately, so many people have been burned by bad eggs that it reflects on all of us. That’s why no matter where you go, you have to leave it better than you found it. If you don’t, you will be ruining hunting locations for you and for others.

As everyone is hitting the woods deer, mushroom, turkey, pheasant,  rabbit and duck hunting please remember to be respectful of others and landowners.