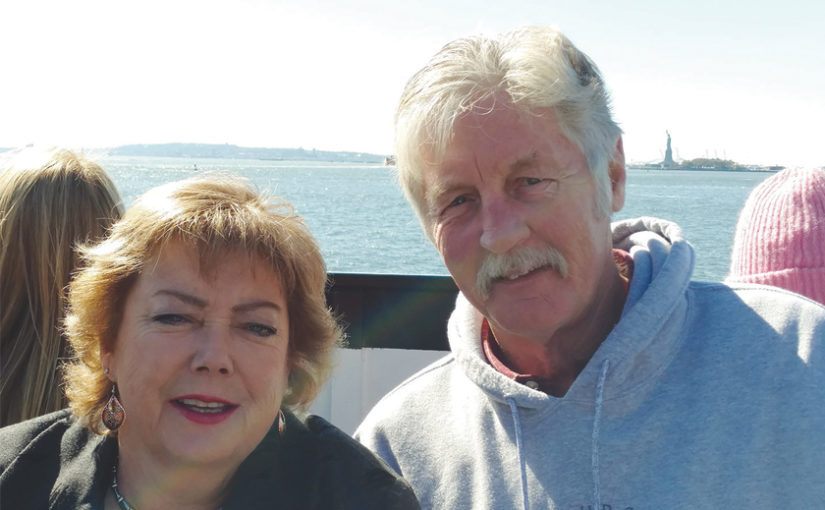 Andy has now owned ASO for over two years and has done a fabulous job of keeping this unique outdoor publication the most distributed and read around.  I still help Andy on a few duties but overall he has taken the reins and is doing a great job. The content of ASO is diverse and there is always something of interest for most anyone. He has expanded, made the paper better and is always coming up with new ideas.

One section of ASO that has become a new venue for its advertisers and readers is our real estate section. ASO is responsible for millions of dollars of property sold by putting buyers and sellers together. Andy is very proud to have such an extensive portion of the paper dedicated to real estate.

Back to Andy, he is a hunter, fisherman and a very hard working dedicated guy who has been accepted in the outdoor industry world with open arms. I know without a doubt he will take ASO to new highs and keep this great paper going for many years to come.

Since ASO’s inception in 1996 on my kitchen table in Peoria it has been quite the ride to say the least. I have met thousands of great folks from all over the world.  It’s been fun and I know Andy enjoys creating ASO each month as much as I did.

Just a note to all, ASO is always looking for photos of good experiences in the outdoors.  If you have some nice pictures of game, mushrooms or other treasures of the woods, rivers and lakes on your phone send them to Andy at: asoandyb@gmail.com.  Please include your name, county and a little info about your experience.  ASO wants to share your trophy for readers to enjoy.  I know a lot of folks would get a big kick out of being in the magazine.

This duck season has not been a very good one. All though numbers are up the Illinois River Valley has not been a recipient of those high numbers. I hear the Mississippi River has the most ducks they have ever had. Up to numbers they have never seen. Talking to a DU biologist some years ago he said our teal, sprig and spoonbills have risen in numbers; but has no real explanation why our old main stay the mallard has not.

I remember when mallards worked the fields 30 miles out along the Illinois River. I might add the farm equipment used today is so efficient that there is no spillage. Along the Illinois mallard numbers have been on a decline for a quite some time. There are a few places that have done ok but big kill numbers at state areas have not.

I have noticed over the years the mallards are not coming down till after a hard freeze up north. At this time all of the ducks have left Canada and North Dakota. You watch in the middle of December we will have a big push not like the trickle we had for so many years.

There habits have changed over the years and I guess we will have to adapt. So for you young hard hunting passionate duck shooters wait till it gets real cold. If I was 20 years younger I would be right with you but I’m sure you will do alright without me.

I remember when it couldn’t get cold enough. One of my favorite memories was shooting the narrows at Big Lake at the old Rednose in a blinding snow storm with my Lab Pepper. He was snow white and so was I, the wind was blowing hard standing in half froze water and shooting the hell out of ducks. The dog sat on a rat house and I stood in the water, man was it fun. Those ducks would come out of nowhere through the snow and the flakes were as big as half dollars.  What a great memory especially with my buddy and pal Pepper.

Those days are gone for me but the memories are still there I hope forever.  So you tough guys get out there later when it’s so cold you think you will freeze to death. I just wish I still had it in me to do that again. Hopefully you can talk about hunts like that when you are old. But remember you can’t if you don’t go.

We are headed to Florida soon and really not soon enough. My Cuban buddy Abel keeps sending me texts that there having a cold front when its 60 degrees in the morning. He says here’s another message from Heaven’s waiting room and were freezing to death.

Abel came to Miami in 1962 with his family escaping Castro. He was 9 years old and this was a total new experience coming from a country that only spoke Spanish. It was very hard to acclimate to this new world. But he learned the language picked up the customs and made America his new home. He joined the Navy, had a number of businesses and has had a great life with his wife Priscilla in North Port.

They have become very close friends that always pick us up at the Punta Gorda Airport when we fly down. When we get down there we plan to fish as much as we can!  What’s so nice about being there is everyone’s there for the same reason and that is to spend their older days in the sun and enjoy being retired. I have had enough of this cold weather to last a life time.

I do plan on shooting ducks on the Myakka River just out my back door. Last year we shot a number of birds on the river and what’s nice is you don’t have to bundle up, usually a light jacket and blue jeans.  A lot of bluebills, teals and an occasional mallard. I have a Mud Buddy motor on a jon boat and it is great. The duck season goes till January 28, 2019. Then it will be time to hunt some wild boar and maybe an alligator.

The last 22 years I have written about the old Rednose Gun Club near Banner Illinois. I have told you most of the memories that I can recall. There are some pretty colorful stories I have not talked about yet but will in the future.  It was a time many years ago when I was a young man growing up in a world that was much simpler and so much kinder.

It is a shame that people today are embracing Socialism which is a nice name for Communism. Sure let’s get everything for free.  But at who’s expense. I’m afraid that in the near future even in our life time things may change so radically that there could be a National uprising. The far left have demonstrated that many times this last year at colleges and in the general public. Let’s not pretend it won’t happen, it will, it’s a matter of time. They have been trying to get your guns and still are. It’s very important to support organizations that fight for your gun rights.

Illinois State Rifle Assoc. (ISRA) is our leading organization working in Springfield to STOP these crazy gun grabbers, who want to add taxes and expenses to try to make shooting sports too expensive for the average person and have gun restrictions. ISRA Executive Director, Richard Pearson, works very hard lobbying for gun owners in Illinois and other states too!  Read his monthly article on page 12!

Wishing everyone a successful hunting season! Holidays are here again. Time moves so fast make the most of the moments you have with family and friends. Wishing you and yours a very Merry Christmas!

Keep your worm wet and your powder dry!  Harry