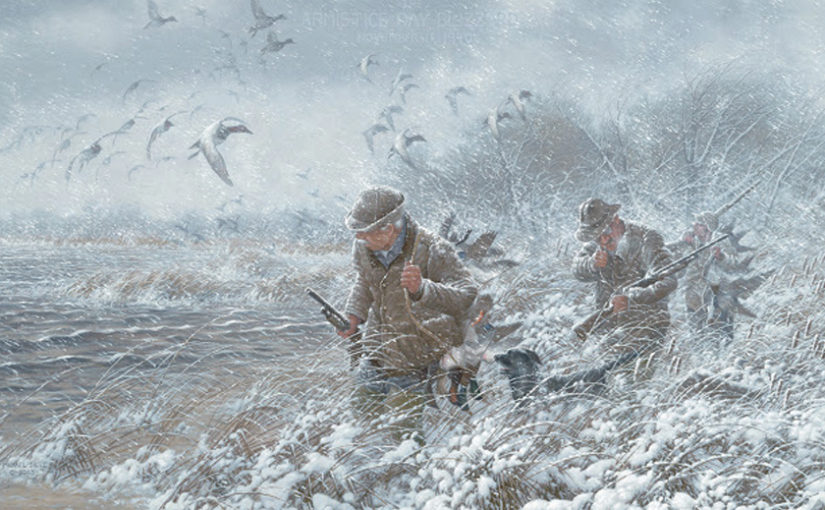 The Storm of the Century Armistice Day 1940

Being an old duck hunter who has hunted ducks in virtually every type of weather situation I found there is one event I have never done. In 1940 here in the Midwest there was an event that the old timers still talk about to this day. I have hunted in 40 mile an hour wind gusts and have experienced just about what ever Mother Nature can throw at you. I have fallen in to the icy waters over my head and have been frost bitten on my fingers. Even today my trigger finger becomes numb when it is cold out due to frost bite over 40 years ago. I have been so cold that it took many hours of heat around a wood stove just to stop shaking; along with quite a few shots of Jack Daniels.

I have had many friends I hunted with take a bath in the drink and they got hypothermia and if it was not for quick action they could have died. I know many of you have had similar situations in your days as a waterfowler.  Many a man has succumbed to the cold over the years and the story I am going to tell is one that not even the most prepared outdoorsman can survive and that is the The Storm of the Century Armistice Day, November the 11, 1940.

I’ve told many a story about the men I hunted with at the old Red Nose Gun Club a few of them born in the 1890’s. Men like Bill Friedman, Paul Merten, Doctor Coleman, Frennie Courtney and others. They lived through the best Duck shooting God put on earth and were there when the big one hit on that fateful day.

When I was a very young man I would listen to the stories they told about the hay days of waterfowling. Bill Friedman said he went hunting that day on Wesley Slough near East Peoria Illinois. It is a 10 acre oxbow on the big curve just south of Peoria. He said it was a comfortable light weather day with no alerts that looked bad. He said they were having a fairly good shoot when it started raining and then snowing and the wind came up blowing hard.

Bill said it was looking like the most perfect day a hunter could ever ask for.  Then the winds started howling the temperature dropped and it got real cold. The ducks were piling in to this little hole to get out of the wind. Bill said it blew so hard that ducks in the air were beating their wings as hard as they could just to stay in the air.  He said he would shoot 8 feet in front just maybe to knock one down. They were lucky ones with their car not far away they were able to get out and go home before it got worse. Bill said it was one duck shoot he would never forget as long as he lived.  Now here is the story of the 1940 Armistice Day Storm, THE STORM OF THE CENTURY.

The Armistice Day blizzard of 1940

Seventy-nine years ago this waterfowl season, an unforecasted winter blizzard threatened the Tri-States and killed more than 150 people in at least five Midwestern states, including Illinois.

Many of the victims were waterfowl hunters caught insufficiently dressed and otherwise unprepared on rivers and estuaries as a severe cold front descended on the Midwest suddenly and intensely. For many local men, what had begun as an opportunity to enjoy a day of hunting on the river with friends became a struggle to survive.

On Nov. 11, 1940 (Armistice Day, now known as Veterans Day), residents of the Tri-States were enjoying unseasonably warm, sunny weather, much as they did in early November 2012. Hunters call it “blue bird” weather, better suited for yard work or fishing than duck hunting. However, it was also a holiday weekend and in the middle of what was traditionally the best part of the duck hunting season.

Hunters loaded up their wooden skiffs and headed out onto the rivers. At first the hunting was the best of their lives. Thousands of ducks descended from the blue sky faster than the hunters could shoot. They were being driven by a storm the hunters could not yet see.

By late morning a blizzard roared into the middle Mississippi River valley. Hunters were still thrilled. The weather drove the birds to them. By early afternoon, 40-50 mile-an-hour winds arrived carrying snow, sleet and rain and whipped the river into tall, white-capped waves. Temperatures dropped from the 70s in the morning to the low 20s in the late afternoon.

The thrill turned to fear and then panic. Hunters in the river blinds were quickly imperiled by the fast-moving storm. They were unprepared to face the frigid winds. Few had coats, and their charcoal heaters, normally used in the blinds, had been left behind because of the warm weather.

Several hunters were trapped in their blinds when their boats were swamped, stranding them through a near–zero degree night.

Two Fort Madison, Iowa, men died in their blinds within sight of Keokuk, Iowa. Another small group of men on the river nearby in the Dallas City area met a similar fate. Several hunters on the Illinois River lost their lives by freezing or drowning.

The experience of a group of five friends from Quincy was typical of the perils hunters faced throughout the area.

Charles Binkert, Harold Sharp, Maurice Langellier, Dr. Isaac Hoffman and Frank Dick were staying at Binkert’s camp, about two miles above the railway bridge on Bay Island. Binkert, Sharp, Langellier and Hoffman left the camp before 6 a.m. that day to go to their blind on a small willow island just north of the bridge. Dick remained in camp.

The men had gone to camp in two power boats. They left Binkert’s boat at the camp and towed a small flat boat behind Sharp’s power boat to a point opposite the island. Sharp’s boat was left on the Bay Island bank, and they went across to the blind on the willow island in the flat boat.

When they went to the island, the river was smooth and the temperature mild. As the cold front moved in, it brought the wind and the birds. They were too busy shooting and picking up birds to appreciate fully the severity of their changing circumstances. The high wind from the west churned up five-foot waves. The flatboat broke loose and sank, leaving the four men stranded.

For the next 10 hours, all the hunters could do was wait to be rescued, and the chance of spending the night on the small point of land appeared probable because no boatmen were venturing out on the river.

Toward late afternoon the river quieted somewhat and another hunter, Harry Nicholson, came down the river in a skiff. The hunters attracted his attention and told him to bring help. Nicholson informed Ollie Ziener, custodian of the Quincy Boat Club, of the men’s plight when he arrived at the bay. Ziener searched for a boat owner who would venture out on the rolling river.

Clarence Quest, a member of the Coast Guard reserve and owner of a large power boat, attempted the rescue, accompanied by John Gillespie. The high waves forced them to turn back just after leaving the bay. However, they returned and secured the “Dutch,” a large cabin cruiser.

They ran past the willow island, not noticing the stranded hunters, and reached Binkert’s camp without locating the hunters. Dick attracted their attention and directed them back to the island. They nearly missed the hunters a second time because the snow and sleet had greatly reduced visibility on the river, but Binkert fired his shotgun to hail them.

Despite high waves and several unsuccessful attempts, Quest got the cruiser near enough to shore for the men to get aboard and then returned to camp for Dick. He was so cold that he was “about ready to burn the furniture” to keep warm, according to the hunters. In fact, Dick burned the door off an outdoor toilet to keep warm.

In the meantime, Binkert’s power boat had been sunk by the waves and his landing destroyed. Sharp’s boat was blown onto shore. By the time the “Dutch” reached Quincy, it was encased in ice as the waves had washed over it. The five Quincy hunters were more fortunate than those who died in the storm just a few miles north on the Mississippi River.

Other area hunters struggled as well.

Frank Bauer had been hunting on Teal Island that day when he passed the west side of the island where the four men were marooned about noon. He was unaware that they were in trouble. Bauer left Teal, which is at the mouth of East Chute, and came down back of Cottonwood Island to keep out of the wind. His big river skiff took the waves well until he reached the North Side Boat Club. There he discovered that the North Side float had been wrecked by the waves. He had no choice but to beach his boat in order to get ashore safely.

James Beatty and others, hunting north of Meyer, were trapped on the river and fought to return to shore. Beatty and his partner were hunting on an island when the wind broke. They had just shot three ducks, and Beatty went out after them in the boat. He got two of the ducks, and the waves began churning so high that he could not reach the third. He returned for his companion and they started for shore. The waves carried them a half mile above the camp before they were able to land.

The Armistice Day blizzard had lasting effects. Prior to the event, weather forecasts for the region originated in Chicago. After the failure to provide an accurate forecast for this blizzard, forecasting responsibilities were expanded to include 24-hour coverage and more forecasting offices were created, yielding more accurate local forecasts.

Hal Oakley is a lawyer with Schmiedeskamp, Robertson, Neu & Mitchell LLP and a civic volunteer. He has authored several legal articles and edited, compiled and/or contributed to books and articles on local history. He hunted waterfowl for the first time on Nov. 11, 2012.

Here in Illinois during the great Armistice Day storm dozens of duck hunters downed or froze to death up and down the Illinois River. The reason this happened is due to no radar weather forecasts available at the time. This also happened in the 1830’s, but was so long ago it’s almost forgotten. An ironic incident was in 1975 on Nov. 11th Armistice Day the SS Edmund Fitzgerald sank in Lake Superior.

We as sportsmen who spend time in the elements, should always be prepared for the worst development in weather. As my dad always said, you can take it off but you can’t put it on if you haven’t got it.