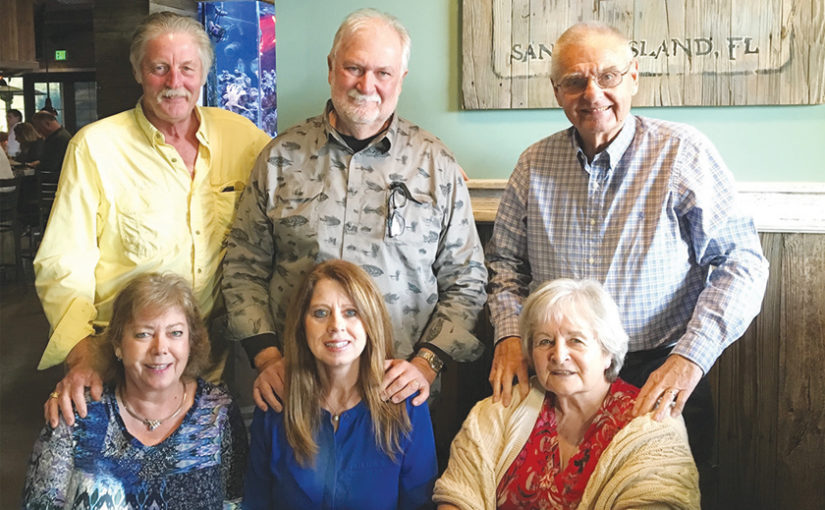 It sure has been cold in the north this winter but that is what it is supposed to be this time of year. Even here in Florida we have had some cool weather. Being a boy from Illinois I am taking advantage of the cold dip by doing some duck hunting. That’s right they shoot ducks down here and it is a lot of fun.  Bluebills are the duck but teal also come occasionally to the tidal flats. As of this time and only really gone once no ducks in the bag.

It is much different shooting ducks in Illinois but I am making head way. There are tides to take in consideration along with wind direction decoy set ups and other things. Our first try at duck shooting was an experience I don’t want to repeat. My partner, Brent Manning and I hit a sand bar and it took 2 hours to get the boat afloat. I will say this without a Mud Buddy motor we would still be out on the flats.

When we hit the sand bar we went 60 yards on the sand. Every time we made a little headway pushing the boat the tide kept going out more. We put a shovel behind our boat and only made a few inches at a push, and then once in a while we would break the suck of the boat and move a foot or so. Finally we floated the boat and were then on our way.

There is no way we could have made it without that Mud Buddy, what a wonderful motor and the most dependable piece of equipment a duck hunter can own.

The next day we did have a nice set up and had 100’s of bill’s fly by with good shots that should have been taken. Florida duck hunting is fun or at least interesting to say the least. It lasts until January 28th the limit is two bluebills a day.

I did hear Pat Sullivan and his buddies have been tearing the bluegills and crappies up back home. I wish him luck but I would rather be fishing here in a T-shirt; being a senior citizen, its better getting a tan than frostbite. I used to love ice fishing but not so much now.  ASO-TV did a show with Pat scheduled for Sat. Jan. 27 at 5:30 pm. Then see show on our YouTube.com page: ASO Magazine.

Andy Bugos and Mike Obrien will be hitting Mike’s Lake in Victoria Illinois where I have fished in the past and Mike has one of the best managed lakes in the country. It is one of the most productive places I have ever fished in Illinois. Congratulations to Mike on this successful lake!

If you do like ice fishing please be careful. It seems about every year or so someone perishes by falling in the drink. Have a plan such as extra-long rope tied to a tree, a tool to grab the ice and don’t go by yourself. If you don’t swim well or can’t swim wear a life jacket. Being prepared is number one when ice fishing.

Now another RED NOSE memory a long time ago but not forgotten. We had a little shack in the woods which was HQ for all of the other activities such as eating, playing cards having a beer etc. Paul and Julie Merten were a big part of taking care of us when we came back from duck shooting. There was always a stew or some duck dinner always with potatoes and onions and whatever was in the garden. We took it for granted that they would always be there.

My dad was in Milwaukee at his job as the head livestock buyer for Patrick Cudahy and Company. It always was a Canterbury gun club and I at the time was too young to make any decisions. I was made a member at the age of 18 and dad was busy making a living. So all decisions were made by a vote and that’s the way it was for a while. Doctor John Canterbury my dad’s cousin, a man of old values brought up the idea that the club was a boar’s nest. I heard him say that many times and knew that something was going to happen. In all the years of operations there was never a problem of any sort due to the fact that Dad as was grandpa the only person who said how the club would operate. It was a dictatorship not a democracy and if you have ever been in a club you know there is only one chief. Many a club has fallen apart just because of that.

One day Doc said Harry we need to have a vote on whether or not Julie can come here during duck season. I listened and thought what in the world would we do without Julie who was an Angel in every way. We had a meeting and there were only two votes to send Julie home one was his and the other was Ross his son who was not there very often. After it was decided Bill, Frenny, Paul, Fred, Phil, Bob and me had a sigh of relief and dad was happy too.

Doc’s idea was the club was a boar’s nest only for men but how wrong he was.  From then on Julie was there and the kitchen always had something on the stove that smelled so good. What great memories I have and what a wonderful life I just wished everyone had the same.

We have been busy with a few friends visiting us in Port Charlotte.  It’s great having company with a few more coming down before winter is over.  Melvin and Annie Otto our friends who are Amish came for a visit from Sarasota one day and it was fun. We spent a few hours visiting with no TV or radio which was nice. I would say that these folks have mastered conversation to an art. It reminded me when I was a kid on the farm when my grandparents would visit their neighbors nearly 60 years ago.  We laughed, talked and had a great time for a couple of hours just visiting.

The Amish are a reflection of how we as Americans once were.  In fact the best part of being human is communicating through conversation which is almost lost today but they keep it close to their hearts.  It was refreshing. The Otto’s some of the nicest folks I know. Thanks to their granddaughter Lori Plank and boyfriend Brian Jess (Mennonites) for driving them down to our home. Otto’s Canvas Shop is located in Arthur Illinois. They do top quality boat covers, awnings, screens and can sew just about anything!

The fishing opportunities here in South West Florida are tremendous. From giant grouper to sharks and everything in between you can catch fish all year long, I made friends at the local bait shop and the rest is history. I am looking forward to all the things to do here in south west Florida and fishing is on the top of the list.  I will keep you posted!

ASO will be at many Shows in February! Stop by and say hi!  Be safe out there…be sure to keep your worm wet and your powder dry! Harry