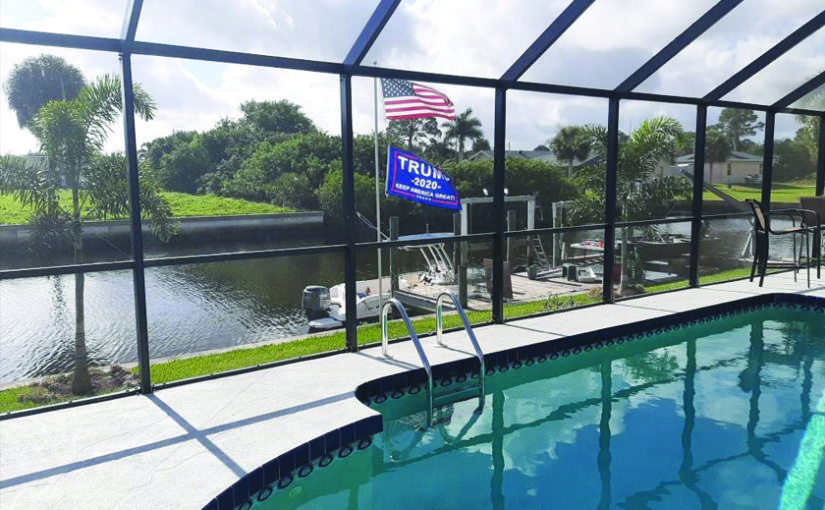 Hope all you had a great winter. March 20th welcomes spring back into our lives.  We’ve been enjoying sunny Southwest Florida since November 19th.

February brought us visits from family and friends. There’s always something to do here in this beautiful weather.  One of my favorites is car and gun shows, lots of fairs and festivals too. We never seem to get bored.  Really the only thing we miss in Illinois is our family and good friends. I highly recommend if you get the opportunity to visit or stay long term down here, do it.

The weather here now is similar to mid-June in Illinois. We try to fish as often as we can but depending on the winds and tides it’s possible to fish almost every day.  Fishing has been great when we get to go.

Mike Bloomberg, who is trying to get elected as our President. He’s a communist that can’t be trusted. He’s a gun grabber that wants to tell people what to eat, drink and how to live their lives. That’s none of his business. Check out laws he imposed on NYC when he was mayor. He also drew fire on social media after footage resurfaced of the billionaire saying farming required less “gray matter” than modern work went viral.

Here is some information from www.newsweek.com.

“The ex-New York City mayor was called “condescending” and an “enormous clown” after his comments at a university event in 2016 re-emerged.

In a clip from his November 2016 talk at the business school of the University of Oxford in England, Bloomberg said: “I could teach anybody, even people in this room, to be a farmer. It’s a process. You dig a hole, you put a seed in, you put dirt on top, add water, up comes the corn.”

Brendan Carr, the commissioner of the Federal Communications Commission, tweeted that tractor and combines packed “far more tech than a Bloomberg Terminal” and called them “mobile data centers.”

He added: “America’s farmers are now experts in agronomy, tech, data analytics, & other advanced skills. Grateful for their work.”

The Independent Women’s Forum Center for Progress & Innovation director Julie Gunlock also weighed in on the resurfaced clip.  “Bloomberg is an enormous clown who doesn’t know about farming and doesn’t deign to speak to farmers,” she posted. “If he did, he’d know farming is intensely high tech today.”

It’s a sad time in America when you can buy the most powerful office in the world. Folks don’t believe his commercials. He’s a fraud and if he’s elected it will be terrible for our country.

Last week Illinois State Police (ISP) Director Brendan Kelly outlined steps that ISP has taken to manage the Firearm Owners Identification (FOID) and Conceal Carry License (CCL) programs.  Director Kelly went to great lengths to explain process time of FOID applications, what ISP has done to tackle the backlog of expired FOIDs, and where necessary, initiating direct contact with those that have had their FOID cards revoked.

We at the Illinois State Rifle Association (ISRA) applaud Director Kelly and the Pritzker Administration for starting the process of fully staffing the FOID/CCL programs for the first time in many years.  Hopefully, it would appear that the days of sweeping fees collected from law-abiding firearm owners is a thing of the past.  We at ISRA would appreciate if Governor Pritzker would publicly promise to reject any further fund sweeps of the various fees used to fund the FOID and CCL programs.

Director Kelly repeatedly indicated the FOID/CCL program was under funded by previous administrations as a response to ongoing budget crises.  These statements are troubling and raise a multitude of questions.  From Director Kelly’s press conference on February 13, 2020:

“Over many years the fund supporting the background check process has been affected by budget crisis after budget crisis and in turn that has affected stable hiring and program build out.”  (Livestream Interview 2:38 mark)

“…over the years and multiple administrations, the funds that were in that particular fund have been swept for whatever reason through various budget crisis after budget crisis…” (Livestream Interview 10:28 mark)

“Well I would say it is not the Illinois State Police that have not managed the resources very well.” (Livestream Interview 20:15)

“I don’t have any doubt in our ability to use those funds correctly, it’s more a question of whether or not that budget will be managed consistently and in a stable manner.” (Livestream Interview 20:38)

Those statements are troubling based on that the FOID an CCL programs are designed to be self-sufficient.  They are funded by fees paid by law abiding firearm owners to exercise their constitutional right to own, possess, or carry a firearm.  Because these programs are funded by fees and not the general revenue fund, they should be immune of budget crises.

Director Kelly used this press conference to also advocate for SB1966 commonly referred to as the “Fix the FOID Act”.  This bill calls for fingerprinting all FOID and CCL applicants and increasing the FOID fee by 300%.  Director Kelly indicated this legislation is needed as a result of the Aurora shooting that killed five on February 15, 2019.  The shooter, Gary Martin, was a felon that had his FOID card revoked April 17, 2014 but inexplicably never had his FOID card confiscated or surrendered his weapons.

After analyzing a Commission on Government Forecasting and Accountability (COGFA) report dated September 10, 2019, covering FY2015-FY2019, we found that ISP has not been spending resources available to manage Specifically we found:In the Firearm Services Fund from FY2015-2019 ISP spent on average $7,474,500.  They did not utilize an additional $9,376,563 available (over 125% unspent funds).

These unspent funds do not include close to $29.5 million dollars that were swept to the general revenue fund.

This figure does not include $11,000,000 in the ISP State Services fund that was swept that year into the General Revenue fund.

We at ISRA believe that ISP has enough resources to complete its mission without asking law abiding firearm owners for more money or forcing citizens to be fingerprinted to exercise a constitutional right.  Furthermore, the Pritzker Administration should launch an investigation as to why previous administrations did not staff the FOID and CCL programs effectively.  Was this understaffing just incompetence or something more nefarious?  Law-abiding firearm owners deserve answers. Thanks to Richard Pearson for this run down of what’s happening in Springfield.  Again, join the Illinois State Rifle Association it’s your only hope to keep firearms in Illinois.

Enjoy this coming spring with Mushrooms and turkeys and keep catching those delicious Bluegills.

Keep your Powder Dry and Your Worm Wet. Harry