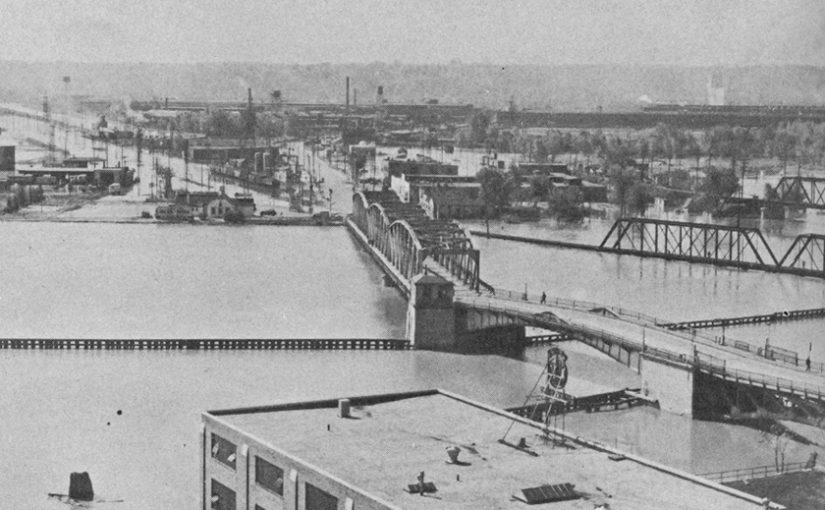 I wonder how much duck feed will be around this season. The 8 inch rain we had took out a lot of planted and wild plants all up and down the Illinois River. I have spoken to a number of clubs owners on the river and they thought they would have one heck of a duck season 3 weeks ago.  But Mother Nature had another idea.  That 8 inch rain we had the end of September changed that drastically. Their millet was all headed out and looked as good as any they ever had.  There are a few clubs who have large levees and are a good distant from the river. They’re really in rather good shape this year because no one has much at all. If I was a hungry duck I would try to go there and eat to my heart’s content.

Why has this been a frequent occurrence, it seems more than usual. I found an old article written by the editorial department of the Peoria journal Star in March of 1982. Here is a part of that article which is true and so predictable. This article is about the spring floods, but it applies to the fall floods to which we just had. Here is part of this article wrote 37 years ago. This is all due to man’s greed and demand for more land to cultivate no matter what the outcome was going to be.

“FLOODS WILL GET WORSE; if you have the feeling that the news about flooding along the Illinois River is getting to be old stuff, your right.

We have said repeatedly that flooding is worse than ever and more frequent than ever because the river isn’t as deep as it used to be. That’s why there’s flooding almost every year now. That’s why the water stays high for longer periods than it used to during flood periods.

The greatest flood of all time in Peoria’s history occurred in May, 1943, when the river reached 28.8 feet. Caterpillar Tractor plants in East Peoria, busy making military products during WW2 were flooded, and the destruction led to the construction of the Farmdale Dam, and more Levees along the river.

Up to that time, there had been no flood over 26 feet for nearly 100 years since 1844. A lot of the floodplain had been reclaimed for agriculture by construction of levee’s, meaning during flood time .water had some where to go. Between levee’s and siltation is a new reason for extreme flooding. In 1979 the river reached 28.7 feet, one tenth from the all-time high in 1943. Since 1970 major floods, more than 22.6 feet have occurred every one and a half years. From 1939 to 1970 they occurred only once every eight years.  IT IS JUST A MATTER OF TIME.  AND MAYBE NOT MUCH TIME. BEFORE THE RIVER BREAKS THE 1943 RECORD. AND BREAKS IT BY A WIDE MARGIN.  Siltation comes largely from farm fields, the precious topsoil of the ages washing into streams and then into the river. It is not just the flooding that results, but the terrible devastation to farmland. It is a double problem with consequences that cannot be over stated.” It has gotten worse as time goes on. The old saying is an inch of rain in Chicago a foot in Peoria.  The flooding is something we will have to live with no matter what, there are no silver bullets around and to treat the problem is on the lower rung of the ladder of priorities. They are not going to tear down the levees and there surely not going to dredge the Illinois River. The cost is enormous and unrealistic to save or reverse what past generations did to the river. Learn to live with high water not only in the spring but the fall as well it’s just the way it is but will get worse.

I am very unhappy with the current political situation here in Illinois, just like high water and high taxes get used to it. But a little advice to all of you who own guns, as of January 1st 2020 pot will be legal in Illinois.  I know many people who enjoy it always have and always will. That’s fine for them, I myself could care less. I’m not saying I haven’t tried it when I was young, I do not use it but if that’s your thing go for it. Just a word of warning for all you FOID Card holders I understand that if you purchase legal weed at a store you have to prove Illinois citizenship  just like buying medical pot. There will be some sort of registration in order for you to purchase. I highly recommend if you care about your gun ownership in this state you are better off to leave it alone, at least buying it.  Remember it is still not legal by the federal Government.  Who knows what can of worms that is going to open? Best advice don’t buy it. The only reason they sell it is to get tax revenue because they are broke.

I do have some really good news to tell you about. On March the 27th, 28th, 29th, 2020 there will be a new Illinois Deer Classic held in Peoria Illinois at the Peoria Civic center. The old deer show which kind of went away for a lot of reasons is being reinvented by John Bunge, producer of the Iowa Deer Classic of Waterloo Iowa.  Talking to him last week it appears he will have one heck of a great show. I remember the old shows were there was plenty of fun to be had by all.  There is an article in this month’s issue that explains what is going to happen by John. I’m excited about this show, it was my favorite of all outdoor get togethers. As I called it the greatest rendezvous of modern times. I get to see old friends I hadn’t seen in years. I wish John great success celebrating this important venue for Sportsman of Illinois.

Have a safe and fun Hunting season this year. Keep Your Powder Dry and Your Worm Wet – Your Friend Harry