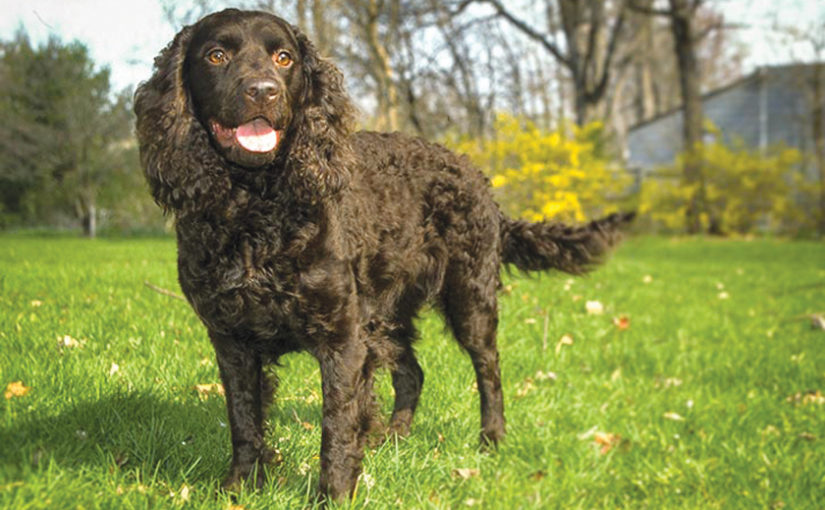 The loss of your best friend never ends, and I guess it’s not supposed to. The love of a dog is unmeasurable, and we all keep the memory alive of that animal that brought the best out of us.  It’s been nearly a year since I lost that big fur ball of love Teddy.  As time goes by it gets better but there is always that empty space no matter what. The only thing that can fill the void of being dog less is another dog. I looked around for a lab for months and found a few. There is either a bunch or like now just a few available.  Any dog that ever ends up at the Canterbury house hits the doggie lottery. Cathy and I love and treat our dogs like family.  They live in the house, sleep on the couch and go everywhere we go.  They eat the best and get to live their life as good as we can provide. That all being said it has come time to get another dog and the hunt is on.

My dad back in the fifty’s for whatever reason bought a dog that I have never seen since then. It was an American Water Spaniel a little brown curly coated guy by the name of Pal. I was a little kid and really had no idea what this dog was all about. I just know that little dog was very special to dad and during dove and duck season they were together.

As Pal got older, he was just a pet that dad talked about all the time. It was dad’s first retriever one of many we had through the years. They were either Labs or Chesapeake’s it seemed forever with no complaints. We even had King Buck’s grandson an unbelievable lab that picked up an uncountable number of birds.

I remember when we lost Pal, he was about 14 and was at the end. Dad couldn’t take him to the vet and had my Uncle Loren take him in. I was about 12 and remember dad sitting in the den staring out the window for a long time. Mom told me to leave dad alone for he was thinking about his wonderful little hunting buddy that he loved so much. I never saw my dad cry but he was that time.

Being dog less has set me in the hunt for another pooch to hunt and have as a companion. I understand there are only 2800 American Water Spaniels in the entire world if that and finding one is a chore.  Here is a little background about these dogs.

Developed by 19th-century market hunters in the Upper Midwest, the American water spaniel has always been a dual-purpose dog, equally talented for waterfowl and upland gamebird hunting.

The American Water Spaniel, (often abbreviated to AWS), is a breed of spaniel which originated in the United States. Developed in the state of Wisconsin during the 19th century from a number of other breeds; including the Irish and English Water Spaniels. The breed was saved by Dr. Fred J. Pfeifer, who set up the breed club and standard, and whose work led to recognition for the breed by the United Kennel Club, and later, the American Kennel Club. While they are the state dog of Wisconsin, they remain a rare breed.

I talked to Chuck Servino partner with Billy Broderick who both are trying to maintain the integrity of the breed.  There are a lot of other breeders who raise these dogs purely for show.  When researching and looking for the right dog one has to be selective in where they get a dog. These two men have made it their goal to preserve, protect and promote this wonderful American breed.

There are less than 3000 of these dogs in the world. I asked Chuck why the population of these dogs is so low. His response was not many people know about them. He also said if people knew that this little AWS was the ultimate versatile hunting dog and pet that it is, it would be much more popular.

An interesting story about one of their dogs named Gator. This dog had lost an eye but didn’t deter his passion for retrieving. Billy took Gator to a training event, let him out of the box, walked up to the line and he took four shotgun marked birds. Some were as far as 500 yards. Gator picked up all four marks and aced them. Gator has been gone for a number of years but his offspring are continuing the tradition. I will be getting a pup out the Gator line and looking forward to it like a kid at Christmas. I can’t wait till I get our new Pal and Cathy is excited too.

Knowing firsthand my dad’s stories of Pal from when I was a kid. The dog was not only a good retriever but a great retriever.  My wife Cathy and I decided to get an AWS puppy because of the smaller size, personality, and having all the characteristics of a good gun dog. They are about 19 inches tall weigh between 35 and 50 pounds. They will retrieve anything a lab will and are great hunters for upland birds. In my older age I think this little guy will fill all my needs as a hunter and my wife’s need to have smaller dog.

If you are interested in talking about these dogs give me a call and I will tell you what I know. But if you are really serious about getting one call Billy or Chuck at Endless Limit Water Spaniels. These guys know the breed like no one I have ever talked to before and know their stuff. It will be a little wait but it’s worth it as far as I’m concerned.

This will be the first year in my memory that I won’t have a dog for the season. But knowing that I will have an American Water Spaniel for next year will be worth the wait.  I wish you all a great hunting season and be safe out there.

Keep your powder dry and your worm wet. Your Friend Harry