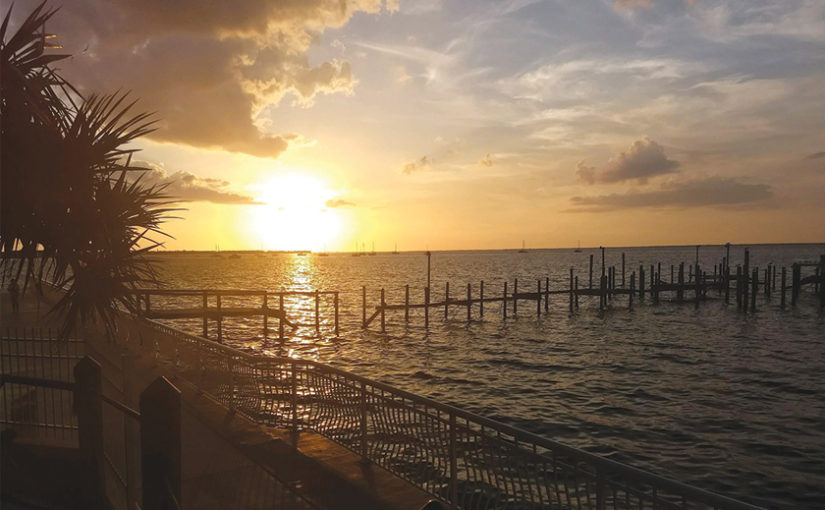 Being here in Florida for the winter has been a great. We have been fishing, boating and just enjoying the weather. Florida has a lot to offer but in reality, it has three specific things and those are year-round fishing, golfing and warm weather. Not being much of a golfer because of bad shoulders fishing has been my number one pursuit. When it was 30 below wind chill in Illinois are coldest day was in the mid 40’s in the morning and warming up to mid-60’s. Cathy and I God willing, always spend at least 5 to 6 months in Florida. There was a time years ago when cold weather was ok with me but not anymore. We will be back mid-April or sooner if I hear the mushrooms are up for I do love them. Last year I was fortunate to get a few messes thanks to Andy Bugos.

We live about an hour and a half from the school shooting that occurred on Valentine’s Day in Parkland Florida. I as most people unfortunately have become somewhat insensitive to these mass shootings. They happen so often it has become just a part of today’s culture. This one hurt watching the parents on TV say things like they never had a chance at life. It really breaks your heart to see what the mentally ill can do to good people. What is the answer? Well in my opinion and many others you can only fight fire with fire. Our kids should not be fearful to go to school, a safe activity not long ago. Can you imagine saying goodbye to your son or daughter and not knowing there may be some sick idiot who plans on killing them that day. I won’t elaborate on this difficult subject not being a so-called expert but I’m just a common man with common sense.

The liberals want to blame the gun for shootings, but folks don’t blame an auto when a drunk driver kills someone. Unless you have a good lawyer!

Another thought is to arm willing adults in the schools such as administrators, janitors, teachers and hey how about having paid or volunteers retired from the military or police departments who would gladly participate keeping our most precious commodity children safe.

Also, these kids with their social media skills can monitor any threats of violence about a gun or anything else and report it to the Police. In this case the shooter was reported to the FBI with no action.

They should have a secure entrance and exit with metal detectors & cameras monitoring who comes and goes. There are a dozen other things we can do to protect these innocent lives, for going to school should not be an exercise in survival. We spend billions on our schools every year but when you have an idiot like the one in Florida take 17 lives it’s time to do something that works. The mass shootings of children in schools, only happens in the USA. The entertainment industry makes billions for movies that kill not a few but hundreds in one movie. The video game producers capitalize on mass shootings in almost all of their games. The list goes on and on and they wonder what has happened to our society.

More children are being raised by one parent than two. And the biggest problem in my opinion is the absence of God in their lives. There is no respect for life and that is sad. It will happen again I just hope the safe guards that are already in place work next time. They sure didn’t this time. It’s time to arm our schools now and fight fire with fire.

For those of you who know the Teddy Bear my 100 plus pound lab he is doing fine since his surgery last June. We walk every morning and he seems really happy enjoying the life of leisure. He now is 11 and a half and I feel very fortunate to have my old hunting partner by my side.  His health is about as good as it could be, and I have to thank Doctor Dan at Cass County Veterinarian clinic in Virginia Illinois again. He saved his life for this old selfish Duck Hunter who just didn’t want to say goodbye.  There is something special about old dogs they know you better then you know yourself. I’m sure you know what I mean. We will get a checkup when we get back this spring, maybe Teddy will get to enjoy another Florida winter.

Here is another Red Nose Memory a long time ago but not forgotten. I remember so many bits and pieces about the old duck club. A lot of the memories of the old club are fleeting as time goes on. But thankfully there are still some thoughts that stick with me.

In 1966 a few years after grandpa died I was starting to learn why my family were crazy duck hunters in earnest. It took a while for it to soak in. Hauling wooden decoys over my shoulder and cutting pin oaks were just a few of the chores I had to participate in and for a 12-year-old kid I wondered why I was there. But found out later that this was the king of shooting sports and the beginning of a lifelong passion that I still have today.  I didn’t know that it would become an obsession and get worse as time went on.   The fun started later that season and boy was I in for a big surprise. Big Lake was huge and the old club across the lake had one of the greatest rest areas in Illinois. Dad always said you have to have a place for them to rest or you don’t have anything.  At times there would be 200,000 mallards resting on that old club’s refuge the Duck Island Hunting and Fishing Club.  Today it is hunted, and the state ruined it forever.

Paper shotgun shells were all we had, and plastic was just coming out. Dad always shot high brass 7 ½ loads and said they break both feet and both wings and are the best loads over decoys you’ll ever shoot. He was so right but many will argue that, but those lead shells were hot.

Dad had a new car, but the trunk leaked, and the case of shells got wet. This was a real case not the little ones we get today. A friend of mine Clay Demasters and I were given the shells. They were swollen, and we had no idea how we could shoot them. We headed to Slim Lake a narrow lake but long and when the wind blew ducks dumped in there by the thousands.

Clay and I figured we could pound the shells in with our fists and ram rod them out with a willow stick. The mallards were landing in front of our blind and I had a double barrel Parker and Clay had his double barrel Fox. It was like shooting ducks in the last century with muzzleloaders. We would shoot drop a duck and quickly reload by ramming a willow stick down the barrel. By the time we finished up we had our limit in mallards and an education about keeping your shells dry. No motors allowed, and we pushed the boat back to the club house and gloated about our great shoot. Those days were fun never to be repeated again and only live in my memories, I hope forever.

Keep Your Powder Dry and Your Worm Wet Harry