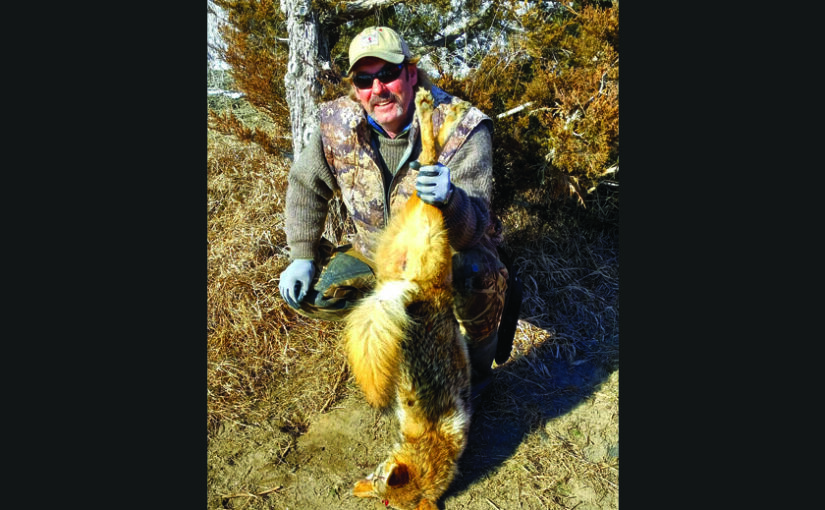 I looked with disgust as I gazed at yet another MB 550 Coyote trap that was dug up and overturned. It was the third one on this farm.  Two sets were also dug up this week. Bait gone and an hour worth of work per set sniffed out by this smart old yote. He had me at a feverish pitch by the end of the days run.  Two sets dug up today with the third one not touched but instead a large pile of scat directly on the unsprang trap. He was not only avoiding the steel I had so carefully laid but ruining the sets for any other coyotes that might happen to come by. I knew this old dog from years past he had given me trouble the year before, but moved out of the area before being caught or causing too much trouble.  Now, he was becoming a thorn in my side. I first encountered old 3 toes last year. His track was unmistakable. He was missing a couple toes on his right front paw, probably from another trapper’s mistake. He was smart, so smart that even with me changing sets, locations, and wearing rubber gloves he still knew where the carefully laid steel was under soil. I had to figure out this terror before he ruined my whole season. I pulled the remaining sets and headed for home.

The next day found me boiling and waxing 6 MB 550 Coyote traps. After pulling them from the hot wax, they were hung up in the tree far away from anything that might contaminate their scent. I pulled a bag of Whitetail scraps left over from butchering a big doe I had killed this fall from the freezer to thaw. This old boy had figured out the commercial baits and every time I had found his scat left on a set it always had deer hair in it. I sat and tried to enjoy a cigar while I pondered the situation. I was going to have to get this one in a blind set, but where to lay the steel? I knew every inch of this farm, but let’s face it, trying to make any animal step on a 2”x 2” trigger pan in such a big area without any attractant like scent or bait was not going to be easy. I knew he was attracted to my sets from the call lure and bait, but always failed to step on the pan. So, I knew I could draw him into an area. I just had to use his keen senses against him.

By the end of my cigar, I had drawn up a set and was ready for the following day. First light had me chilled to the bone as I loaded the 4-wheeler on the trailer, temperatures were hovering in the teens with wind chills, well BRRRRRR. With equipment loaded and my Tundra warm I hit the road. The 35 minutes of travel time had me thinking about all the times this yote had nailed me. He has trashed no less than 12 sets over the last couple of years. I saw him once during deer season. He was big. Upon first glance, I thought I was seeing a wolf as he crossed the field 150 yards from my tree stand. He stood tall and had a body like a rectangle. I crossed his track that day on my walk back to the truck. I knew it was him from his 3 toed track he left in the mud. I had also seen him once during a calling session. I was tucked into a thicket with my remote call and decoy 50 yards out into the field in front of me. I had been calling for about 15 minutes when I noticed a grey mass several hundred yards across the field. I pulled my bino’s out and looked his way. He just sat there watching and listening without moving a muscle. He knew the rabbit cries were not coming from a rabbit but from some unseen danger. The wind was in my favor, but he knew. He sat for a few minutes and then vanished back into the brush.

I turned down the lane into the field and locked the truck into 4-wheel drive. The fresh snow was crunching under the tires as I pulled into my unloading spot. 4-wheeler on the ground and gear loaded, I set about looking for the perfect spot to make my set. After about an hour of driving around I had found 2 likely spots that I thought he might pass thru. I pulled to the first location leaving the Arctic Cat 20 yards from the set location. I carried my equipment to the set spot. I had decided to make the first set exactly like the ones he had discovered so many times before, but I had a twist to throw at him. I had picked a location along a field edge that had a downed tree. The dirt hole set would be put in plain sight in the middle of a forked limb. I quickly half a.. made the set. I did not even use gloves because the half-uncovered trap was not the main one. I wanted him to find it. It was the decoy. The real traps were placed ever so carefully in small openings in the fallen tree where I thought he might enter the location. Carefully, I laid the broken limbs where I did not want him to enter. After a good 2 hours, the set was complete. I used the same commercial bait and scent he had so many times figured out. I stood on the seat of the 4-wheeler and scanned the set location looking for any mistakes. It looked awesome. You’re going down you old SUM…

The next location was an area a half mile away, a small grassy hillside with large clumps of grass every foot or so. This was going to be a modified flat set. I took 5 flags from the Arctic Cat. The flags were similar to the ones you find in your front yard just before the contractor’s dig. These would be the bait locations, I went about carefully concealing 3 MB 550’s Coyote traps in between the clumps of grass, I then placed the pieces of scrap whitetail meat in each flagged clump, carefully tucking them out of sight under the chaff. In Illinois the law states you may not use any exposed bait at trap locations. This law was put into effect so no Raptors, such as eagles or hawks would be injured by the traps scavenging the meat. I then finished the set by adding liberal amounts of coyote urine on each clump of baited grass. The set was to imitate where a hunter had field dressed a deer. These so-called gut piles are visited by every predator in the woods and hopefully would be investigated by 3 toes. The day was coming to an end and so was my endurance back to the truck and home to a hot dinner.

These sets were both hunting 24/7. I was hoping the frigid cold over the next few days would have the coyotes hungry and keep non target predators such as coons and possums out of the traps. The next morning, I headed to the farm with great anticipation of a close encounter with old 3 toes. I drove the truck to a rise. I would check the sets with Bino’s from a distance as not to leave any scent. Both sets were untouched, in fact both sets were untouched for the first 4 checks. I sat on day 4 looking at both untouched sets, had he figured out my game, moved from the area? My mind wandered and relived every step of the setting process.

Day 5 found a fresh layer of snow on the fields as I drove to my lookout on the rise in the field. The anticipation from the days before was gone. Now, I was in just check them mode. I pulled the hat over the Bino’s to shield the glare. I studied the fallen tree set. There had been some activity. I put on my coat and rubber boots and headed to the set. He had been here last night. Tracks were all over. He had stepped within inches of the hidden traps and the decoy was dug up again. You #$%@#$%^…*&^@#$ I mumbled to myself. I pulled the traps loaded them in the truck and spun the tires. This sucker is killing me! I headed to the next set figuring he had figured that one out also, but as I came around the point, I could see a big spot of bare dirt at my location. The grass clumps were all tore up. Quickly, I grabbed the bino’s. In the middle of the mess was a Coyote firmly caught by his front paw, but was it 3 toes?? I pulled the truck closer, this was a Big Dog, and he was not happy. I opened the door. Both of us just stared at each other. He let out a couple muffled growls. He was big, the biggest Coyote I had ever seen. I tipped my hat and said, Hello 3 toes. At last we meet. Do you know how many sleepless nights you have caused me? He just stared at me with those devilish eyes. I quickly dispatched him and went to breaking down the set. I looked at how he had entered the set missing the first 2 traps and eating the whitetail scraps. He had taken the set hook line and sinker thinking it was a hunter’s gut pile. He moved thru it finding every scrap just like he had done for years, never expecting that there was steel laid under paw. I have trapped for most of my life, years ago for the money from the pelts, but there is no money in it anymore. Now, it’s just for predator management and the memories. Every set I check takes me back to the days of my youth and the memories of Dad and I running my small line along the Spoon River. We did pretty good in those days, prices were high, and we took a lot of fur. The money I made was used for Christmas presents and gear. I have a lot of great memories but the battle with OLD 3 TOES will forever be burned deep!

SEE ‘YA IN THE TURKEY WOODS!