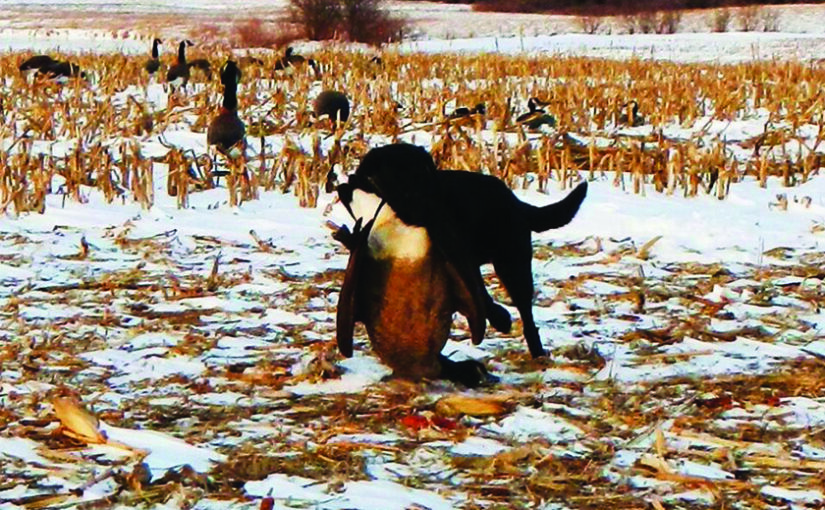 The back water froze swiftly as temperatures dropped into the teens for the 3rd straight day in a row.  Clear skies and light winds had iced over all but the deepest lakes and power plants.  The steady flow of duck boats rambling down the road had all but ended.  I could hear the grumbling of the old timers talking about their bad luck and cursing the early freeze. The mid-week freeze had caught a lot of guys by surprise, their blocks frozen solid in mother nature’s vise like grip. The ones that gambled on the wind staying strong enough to keep their holes open had picked the wrong pony. The only thing left to do was to save as many decoys as they could. The boats in the restaurant that morning was not full of barking dogs and muddy gun cases, but with steel pipes and sledgehammers. I watched as, one by one, they left heading out to their frozen boats, still grumbling under their breath. I felt sorry for them, not because of the hard work ahead of them but their season was all but ended.

This feeling of pity lasted for only a couple of minutes. I paid for my grub, dropped a tip on the table, and headed for the door. A smile from ear to ear suddenly covered my face as I looked across the parking lot at my truck and trailer. It was loaded to the point of busting open with goose decoys and mallard windsocks. Their bad luck was my good fortune. With two weeks left in the duck season, the hard water meant the ducks would be looking for food, not at the water’s edge, but instead they would be fueling up for the late migration with waste corn from the many picked cornfields that dot the landscape in central Illinois. I had been moving a load of decoys a day into my pit for the last week in anticipation of the hard freeze. The cold mornings set a crust over the muddy fields enabling us to get to the pit to set the 500 plus decoys and get it set up in hopes that large flocks of mallards would surely be moving tomorrow in front of the weather that was projected to bring a good wind, overcast skies, and a bit of snow.

I rambled through the basement looking for the new battery’s I had purchased for my spinners like a squirrel searching for a nut he had buried.  Why is it always no matter how hard you try to have everything ready, you always seem to have one last minute crisis.  Come on.  I know it is here.  Hell, here is the Bass Pro bag they came in. All right, this is kind of like following a blood trail from an arrowed buck.  As soon as you lose the trail, return to the spot you last saw blood and try and pick up the trail.  I moved over to my work bench and stared intently at the cluster of broken muskie lures, grunt calls, and assorted gear that had not been put away or fixed. This is the last I saw of it way back in October.  I remember it sitting on the bench, or do I?  “My memory must be going,” I thought to myself.  Just then, I saw a black corner peaking at me from under a face mask.  Yes, there it is.  My lucky ducks would be spinning tomorrow.

Sleep did not come easy.  A night of tossing and turning kept even my lab Scar awake, but what could I say?  He had put up with me for the last couple of weeks neglecting my daily training and grumbling under my breath about throwing that damn bumper, anything that would get in the way of my tree stand time.

Four a.m. found me cussing at the computer trying to get the radar map to move in motion.  This thing gives me more grief than anything I own.  Yes, I can see where the front was at two a.m.  I want to know where it will be at six a.m.  Finally, it started to move. I watched intently at the time changing on the screen.  Crap, it has stalled over northern Iowa.  It won’t get here until noon.  I quickly moved from my seat at the computer to the back door.  A quick look at the sky had proved, once again, the radar map never lies.  The stars glowed like fireflies over the field in July. This was not what I was looking for.  The weatherman promised me.  Oh well, it’s not like he hadn’t lied to me thousands of times before.  I looked at the pile of gear on the table and quickly piled it in the corner, and proceeded to make myself another cup of coffee. I threw on my coat, grabbed his bowl of food, and headed out, dog fed, and back-end business done we headed back to the house and started paying some bills and catching up on e-mails, quite difficulty I may add as he tormented me to no end with his stuffed duck, bouncing off every part of my body.

Mid-morning had me once again at the computer trying to track my duck front.  “Still calling for it to move in early afternoon,” I said to my buddy on my cell who had also seen the weather change coming. Fred and I are leaving at noon from work.  “Meet ‘ya out there.  Hey, don’t forget to bring the other spinner,” I said as he hung up.

The wind had started to change and was now getting steady from the northwest.  I looked over the spread trying to imagine where the ducks would like to light.  Yeah, that’s the spot.  Arms full of goose blocks, I quickly set about opening a hole in the spread.   Where the #$%^&#  is Fred?  He said he was going to be here by 12:30. I always get stuck moving the blocks.  With the spinners set, I headed for the pit.  A quick click on the remote sent my lucky ducks spinning their motors, growling with every gust of wind.  “Come on Scar.  Get in here,” I yelled as he smelled a pile of feathers from a goose that had hit the ground the day before.  My pleas grew harsher as a honk to my left announced a pair of Giants cupped up over the trees and headed to the spread.  I grabbed my gun and rammed in a couple of shells.  Seeing the gun, my dog almost knocked me over diving into his box.  A quick look over my shoulder, and I knew no calls would be needed they were a mere 5 yards over the spread, coasting and looking for a place to land.  I threw open the hole cover and laid into them. They both hit the ground within a couple of feet of the open hole in the decoys.  Well, that answers the question of where the hole needs to be.  Suddenly, a voice echoed from the edge of the spread.  My buddies had witnessed the whole thing.   That was cool.  They worked in nice.  “Yeah, I worked them hard,” I replied, not wanting them to know that I did not even have my calls out or gun loaded.

Third spinner set; we watched as the cloud cover engulfed the sun.  It was only a matter of time before we heard the honks of geese heading out to feed.  “Shut down the spinners,” I yelled, as the flock turned towards the spread.  The loud chatter of goose calls filled the pit.  6 peeled off your side.  See them?  A grunt was the only reply.  “Kill ‘em,” I yelled.  The sharp volley of gun fire echoed off the timber as Scar shivered with excitement.That’s 8. One more. Look out front. A single is heading back. Hold the dog. Let’s see if he will… That’s all of the words I could get out before a single shot rang out and laid him to rest. “Nice shooting boys,” I yelled, as the Scar set about bringing in the meat. This day was starting to look like it was supposed to.

Sleet bouncing off the goose spread announced the front had arrived.  It wasn’t long before the sound of wings and the burst of the gun fire into the December skies proved we had played our hands well.  Flock after flock of mallards fought to get into the spread.  The top of the pit was covered with empty shell casings, fat mallard drakes, and the occasional grey duck.  A quick look at the watch showed that several hours had passed. Only one more mallard, and the day would be complete.  The snow had picked up in intensity, making it hard to spot the ducks.  We could hear their chatters, but no flocks could be seen.  Another look at the watch showed 15 minutes were left in shooting time.  The inside of the pit was getting dark as I started to pack my bag.  Over the spinner, a fat mallard drake hovered like a hummingbird.  Kill him, Mike.  The first shot missed.  The mallard flared up over the pit.  His wings reaching for the dark sky.  A second shot rang out. This one found its mark.  The drake went end over end.  We watched as he fell. “Incoming,” someone yelled, as we scrambled to get out of the way.  The drake hit the top of the pit with a loud thump.  “Are you trying to kill me,” someone asked? No, but that’s our limits buddy!  Laughter filled the air as we stowed the gear and picked up the empties.

We laid the ducks and geese out for a quick photo.  That photo now hangs on the wall over my computer desk. In fact, I am looking at it now with a smile on my face waiting for the whistling wings!!!