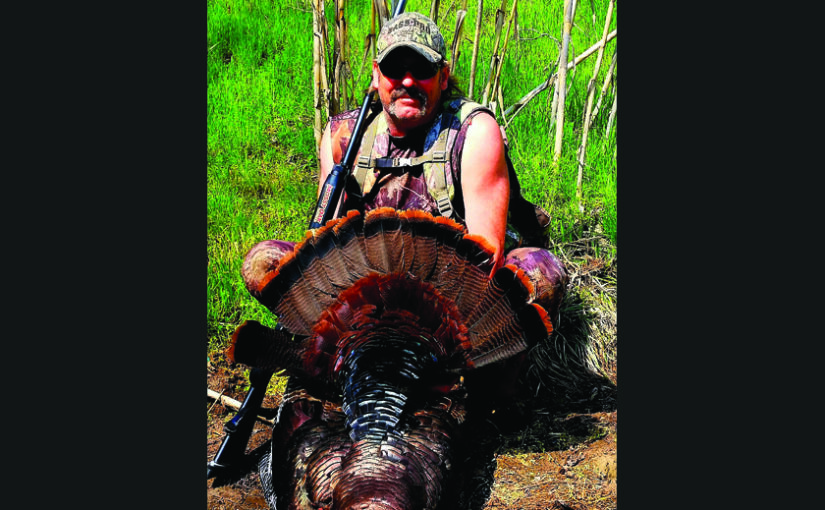 Is it Heaven or Hell Chapter #2….5th Season

I stared at the stars as I walked to my truck with the last of my turkey gear. I thought to myself, “that farm may have gotten the best of me 3rd season, but 5th season is going to be different!” I had upgraded my equipment to deal with the adverse conditions. I had spent a day at Bass Pro Shops last weekend and purchased a new turkey seat to protect my tush from the stickers and a new set of Cabela’s micro fleece burr proof camo pants and coat. Hopefully, this would take care of the nasties that covered the ground and underbrush.

At 3 am, I had my Tundra headed south again for the 1 ½ hr. road trip. The coffee was hot, and the roads were clear, so I made good time. I locked her into 4-wheel drive as I entered the sandy lane. The recent spring rains had packed down the sand so the trip in was without sinking. I pulled into the parking area by the old homestead and checked my watch, plenty of time for another cup of coffee. I poured a cup and stepped outside to welcome in the fresh spring air. I opened the back door and began to gather my equipment for the day’s hunt.

As I turned to grab my boots, I noticed a light on in the old house. What the he..  I thought, “I talked to my buddy last week and he had said he had the electricity cut.”  I looked up and sure as sh.. the wires going to the old house were cut. “No big deal,” I thought to myself as I continued to gather up my gear. I looked up again and the light was off….hmmm. “That’s strange,” I thought to myself. Not thinking too much of it, I slipped my arms into my vest, snapped it shut and grabbed the Benelli and the 3 turkey loads I had on my dash and locked her up. I started down the old fire trail when I heard a sound like something had fallen in the old house. I looked up and the frickin’ light was back on.  Again, I looked up and the electric wires coming from the pole had been cut. I then stared at the window where the light was on, and it looked like someone was staring at me through the window. Goose bumps ran over my skin as I grasped the shotgun tightly in my hands. Every hair on my body was standing at attention. I stopped and just stared back at the figure in the window. Holy sh.., the damn place is haunted. I took a few steps toward the house and the light went out again. That was all I needed to get the heck out of the area. I high stepped it down the road so fast the gear on my back almost fell from my shoulders. I had covered 100 yards so quick it may have been a new track and field over 55 years old record. I was gasping for air as I turned and looked back.  The light had not come back on. Now, I know no one had lived in that old house for years, but I was not about to go poking around it in the dark. I gathered my wits and proceeded down the road to my, well thought out, first sit. I dropped the decoys and looked over the big field where I had seen a few gobblers cross during my 3rd season fiasco. The field was big but not so big that a gobbler could not see my decoys from the timber on the other side. This was the spot for my redemption. I set the hen decoy as the first glow of sunrise started. I swatted at a flying gnat as I reached for the Jake decoy.

Suddenly, I was under attack by a swarm of gnats. I quickly put on my face mask. It had no effect on the dive bombers. It took about 2 seconds for my whole body to be covered with the relentless flying insects. I grabbed for my insecticide and sprayed my entire body with it, including my face, and the air space around me.  It had no effect on the devil creatures. I flailed my arms like a person who was in the water and did not know how to swim. The rising sun was blocked out by the swarms as I flipped my face mask around as to place the eye holes on the back of my head. I could feel them coming thru the holes in my mask and crawling into my scalp. I grabbed the decoy and threw it back onto my back and started running back to the truck. Within 10 steps, my whole body was covered. They were in my ears, eyes and mouth. Was this the wrath from the figure in the house or was God bringing down another plague on mankind? Suddenly, my lack of vision from my face being covered sent me flying. A well-placed log had found its mark catching me right on the top and hooking my right leg. Down I went. Immediately, I felt the pain as I had landed smack dab in a pile of multi floral rose. I clamored to my feet. Staggering like a punch-drunk fighter, I pushed on to the truck. As the light gained on the horizon, the swarm grew looking for any hole on my armor. I opened the truck door, threw in my stuff and started to strip off the coat, etc. I quickly hopped in the seat and slammed the door. A hundred or so made it onto my truck. With ball cap in hand, I quickly dispatched the ones who gathered on the inside of my truck windshield. I sat in amazement as the swarm covered my truck and windows. It was hot, but I dared not to open a window, so I fired up the truck and headed back down the road with the air conditioner on full blast. My brain was numb as I turned onto the hard road.

I headed into town where I found a mom and pop store with an open sign in the window. I grabbed my wallet and walked in still brushing a few survivors from my torso. “Buffalo’s,” said a voice behind the old counter? What the?  “Buffalo gnats have been bad for a few days,” she said. “I have heard of this,” I said.  What ‘ya got to repel them?  I think they were feeding on my bug spray. She just laughed and said dryer sheets. Excuse me? Tuck a couple of these under your cap. Vanilla also seems to keep them at bay. Do you have a thermal cell? She replied, “yes, I have one left.” How about a head net? Again, she laughed and said, “they were on the wall by the hats.” Okay.  I threw my counter measures onto the counter, one head net, one box of fabric softener sheets, and a pack of vanilla truck air fresheners. That will be $45.99. I looked down at my wallet and, to my luck, there was a 50-dollar bill left in my hiding place. Wow, and I thought waterfowling was expensive. Back in the truck I headed back to the battlefield. Back at the farm, I redressed in the truck. I tucked 2 dryer sheets under my hat, hung 2 vanilla air fresheners from my vest and rigged the thermal cell in a shoulder strap. I pulled the head net over my face and opened the door. The gnats were miraculously avoiding my body.  Not sure what was working but something is definitely holding them at bay. I never saw or heard a turkey the rest of the morning.  Hell, I never seen anything alive moving that morning.

The next morning found me parked in the same spot, but this time I was ready for them. I started up the road looking hard at the window.  No figure stared back. That was good. I set up and listened for a gobble. After about 10 minutes, I heard a tom not far from my position. He was on the ground and headed the other way. I hot stepped it around the pine thicket to try and get ahead of him. I had not run like this since cross country practice in high school. I made it to the corner of the property just as the bird headed for the neighbor’s fence. I grabbed the mouth call but there was no air left in my lungs.  I ripped open a zipper on my vest and produced a fine cherry wood box call. I pulled the paper from in between the paddle and box and let out a halfhearted yelp. Down to my knees I went as the tom spun and started to strut. I could feel the gnats crawling on an open spot on the back of my neck, but I had a bird coming. By now, the air had filled my lungs and I placed the mouth call back in and began to work the bird. He was coming right at me, so I put the gun on one knee and waited. It looked good but with one problem. He had to cross a patch of little blue stem prairie grass that was all around me. With the grasses 3-4 feet tall I had lost sight of the tom. I slowly yelped but there was no reply. I waited. Still no bird and no reply. I was just about to stand when a blue head came bobbing out of the prairie grass just 5 feet away. I clicked off the safety and fired. The tom took off like a shot. I stood and shouldered the gun but he was at full speed, dogging in and out of the little blue stem clumps. Five seconds later, he was gone. I just stared at the spot where he stood and shook my head. How could I have missed him? Well, that new Indian Creek choke is so tight it was like trying to hit him with a rifle. I shook my head and was about to move when the gnats had homed in on my position. I grabbed my gun and shouted at the sky, “Why me?” “Why me.” I was beaten, bruised, and defeated. I swung by the old house before I headed for the truck.

There was no footprints in the sand by any of the doors or windows, so, it was a Spector and for damn sure he did not want me shooting any of his turkeys. I decided this would be my last hunt on this property. But my friends, it’s not over. I drew another tag for 3rd season in 2021.  So, the final chapter of Is it Heaven or Hell will continue next month…..

SEE ‘YA ON THE WATER