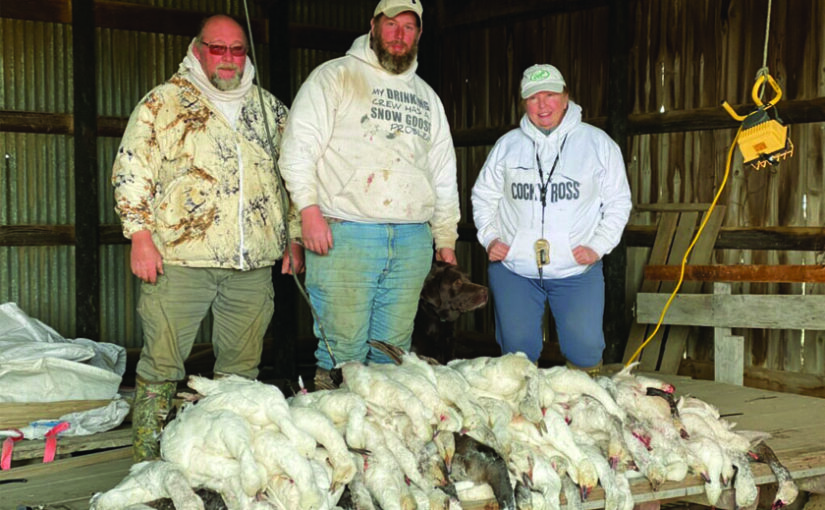 Without sleep from the anticipation of the next mornings scheduled Snow Goose Hunting Trip and other demons haunting my brain, the meeting time was not to be missed!  Lombardi time has always been my mantra when time schedules are to be met, only the slight twinkle from stars emanating from the occasional break in the clouds and strong south wind helped keep my focus on the drive and not on my tiredness!

Snow Geese are not the late risers of the Goose Line.  They are at it early, if they take the night off at all?  Being in the pit and ready at shooting time is paramount to begin the days hunt.  The trudge through the wet and muddy field approaching the pit situated on the near apex of the hill was forgotten when before us visible, only by the concentration of white snow goose decoys surrounding the actual state of the art metal box, could one discern the blinds location buried in the ground.

Rapidly growing light illuminated the massive spread of decoys positioned with care and spread over a two-hundred-and-fifty-yard radius was a sight to see for an old hunter used to the smaller Canada goose decoy spreads from my experience!  The sounds of Snow Geese from the dark sky overhead was soon joined by the electronic sounds from the state of the art electronic box sending the “hustle and bustle” calling of a feeding flock from the speakers situated for effect within the decoy spread.

Action was immediate, a flock approached as if wanting to land barely visible against the morning sky, but I was not ready!  As the group circled and moved overhead, the call was made to take them, and my first goose of the morning folded on my second shot.  The slow-motion fall of the bird seemed to never end indicating the distance of the shot was long.  The feeling of success stifled the lament of not being ready on the first approach where the multiple closer targets presented themselves!

The inhabitants of the pit included the two working masterminds of the operation along with Jacob’s dog Gunner who is worth the trip just to see his methodical attention to command and drive to retrieve on the most difficult of downed bird chases!  Jacob and his father Craig Gessford, a son /father duo, are in their third season on this location of land, owned by Jacob’s mother, Mary Gessford.  They have honed their expertise on the art of Snow Goose Hunting to another level during this time!  The time spent, not to mention money outlay, is definitely bearing fruit as the success levels continue to increase!   Their shooting prowess was just one facet of their hunting acumen; both are to be listened to intently in the blind for the finer aspects of this sport!

Numerous birds fell during this day’s hunt but the volume from the previous five-day period average was not matched, indicating possible major shifts in migration or feeds occurring in fairly close proximity to this location drawing birds away to where the action is!  This is a game of time spent afield with the number of guns in the blind filling the seven spots available at the ready, to build harvest numbers.  Two banded birds have been tallied to date, a relatively rare occurrence in this sport, but adding to the mystique with learning the age of the birds along with banding location.  One had been banded five years earlier on the North edge of Hudson Bay, Canada.  Imagine the miles traveled by this female over her life span!

These men have worked hard, along with others; who have assisted in placing the decoy spread and some monetary investment to facilitate this operation’s existence but the day in day out work of these individuals have provided some memory making Goose Hunts for those involved!  This effort is appreciated!  All birds taken are destined for table fare as nothing is wasted.

This activity, as labor intensive and cost prohibitive as it is, appears to be growing for years to come as Snow Goose populations continue to increase and the opportunities to hunt them improve as well.

Many of my deer stands need retrieval, shed antlers are being devoured by mice and squirrels rather than being added to my pile at home and Turkey Hunting gear needs to be organized for the opener, but another outdoor activity has now become a mainstay for this hunter during this time of the year, as the lure of the migrating geese of the Snow Goose variety sing their Sirens song!