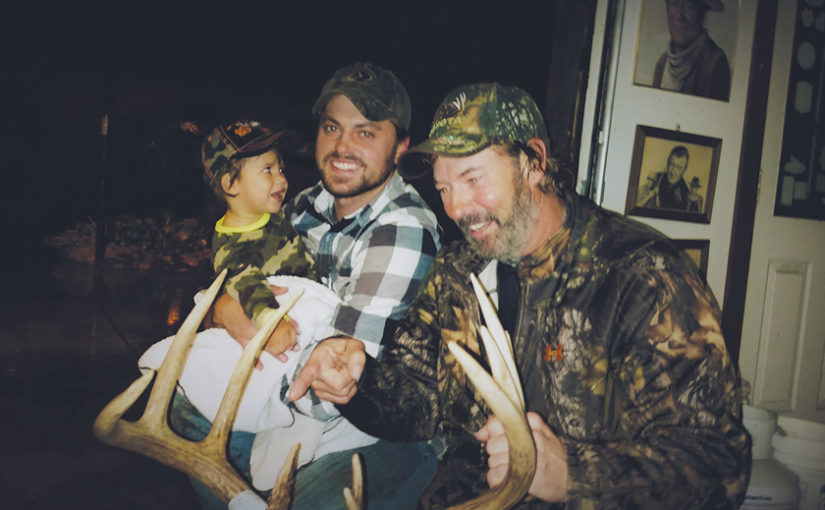 More Than A Hunt

I awoke to a small clap of thunder and the smell of freshly brewed coffee filling the air.  I could hear dad rustling around in the kitchen.  Was it already time to get up?  I yawned, gave my eyes a rub and walked in to find him already at the table, coffee in hand, studying the forecast on his laptop.  Being a morning person was a trait that he did not pass down to me.  The urge to retreat back to my old bedroom at my parent’s house was all too strong, but I had stayed the night here and was now awake for a reason.  I had a 4th season turkey tag to fill and one day to do it.

It was the spring of 2013, and I had just turned 21 years old.  I was working, living on my own and doing things that a freshly turned 21-year-old does.  At that time in my life, there weren’t too many things that could coax me into spending a Saturday night at my parent’s house, but the promise of my mom’s homemade spaghetti and a turkey hunt that next morning was definitely one of them.

My busy schedule only allowed me to hunt that Sunday morning and, as fate would have it, the rain was coming down heavy and didn’t offer any hope of letting up soon.  “Looks pretty wet out there,” I said, still feeling the strong gravitational pull of a warm bed and a few more hours of sleep.  “Your call,” dad said, “but ya’ ain’t gonna’ kill ‘em if you’re layin’ in bed.”  There it was, my dad’s old expression that had become all too familiar to me over the years, but he was right.  I wanted to bag a big ol’ Tom, and I wasn’t gonna’ do it unless I poured myself some Folgers.  I double checked my pack and laced up my boots.  Rain or shine, I was determined to be in the woods before those birds hit the ground.  Hell, a little mud never hurt nobody anyway.

Half an hour later, we were in the truck headed to the property and having our traditional argument that all father and sons tend to have.  Something about not getting Poptart crumbs all over the cab of his new Tundra, if I remember correctly.  Some things never change.  Our petty squabble soon ended with the help of some old George Strait tune coming through the radio waves.  Suddenly, I was 10 years old again and dad and I were headed to the woods in pursuit of my first turkey.  This is what it’s all about, I thought to myself.  That same feeling, I still get after all these years.  The preparation, the anticipation, and the time spent with my old man.

I was pulled out of my daydream as we turned off onto the dirt road leading to the property.  Time to put on the game face.  One last sip of coffee and a quick once-over of my pack as we parked along the edge of the timber.  Thankfully, the rain had diminished to a slight drizzle.  It was a chilly spring morning that would have been perfect for the long trek ahead of us had it not been for the earlier downpour.  Things were about to get sloppy.  If dad was worried about the Poptart crumbs, he sure as hell wasn’t gonna’ like all the mud we were bound to bring back with us.  Oh, well.  I grinned, can’t win ‘em all.

Decoys packed, facemasks on, and the Benellis loaded, we took to the field.  Guided by the silhouette of the timber edge, we trudged through the soupy earth and headed toward our first spot.  I had to admit, it was still as difficult to keep pace with dad as it had been a decade earlier.  For 50 years old, he could still move.

We were halted from our steady pace by a loud, resonant gobble that could only be produced by one thing, a big ol’ Tom.  Dad and I locked eyes, and I wonder if he could see the big s— eatin’ grin on my face through the mask.  The birds were waking up, and we were gonna’ be ready for ‘em.

The sun began its ascent over the horizon as we set the decoys in place and settled into the brush along   the tree line.  We were soaked with sweat from the long hike, but adrenaline was flowin’ and the birds were talkin’.  It was time to talk back.  Dad had the slate, box and mouth calls all at his disposal, and he knew how to use them.  I’d heard it many times before, but it never ceased to amaze me.  That man can call!  He had those birds so riled up, they didn’t know what to think.  Unfortunately, as vocal as they were, it seemed they had an agenda.  Those boys were henned up, and they were following the ladies in a different direction.  After a few minutes of communication, we determined their course and packed up the decoys.  If they won’t come to us, we’ll go meet ‘em.  After all, what’s a good turkey hunt without some runnin’ and gunnin’?  We made our way across the farm and into the woods where we’d anticipated their destination.  Stalking along the trail, we tried to maintain communication, but the birds had gone silent.  Had we guessed incorrectly?  We made our way down a steep ridge and up the other side of the ravine.  “Looks like I won’t need to hit the gym tonight,” I whispered between heavy breaths as I rested against a tree.  It had started to heat up and fatigue was beginning to set in.  We hadn’t heard a gobble in over an hour, but we decided to give it one more try and set up at the edge of the field beyond the ravine.  Decoys in place, we sat and settled in.  Dad started to cluck a little bit and I was mid-drink when we heard a deafening gobble off to our immediate right.  I about spit out my water before I slowly set the bottle down and got my gun in place.  Dad was to my left, hidden behind myself and the tree.  They were advancing upon us quickly as he called and I watched.  Next thing I knew, I saw three heads bobbing through the tall grass, surveying the scene and coming towards our decoys.  Dad didn’t have a view, but I could see them clearly, three big ol’ Toms.  I was patient as they got closer and began to strut, giving me time to judge the trio and make my selection.  I saw the rear bird turn broadside and display a beard that looked as if it might drag the ground.  “That’s my guy,” I muttered under my breath.  He separated himself as I put the bead right on his head.  BOOM!  Perfect shot, dead before he hit the ground.

Next thing I knew, dad was embracing me in a hug that was filled with pride and unbridled joy.  At that moment, I think he was more proud of me than he was of any touchdown pass I’d ever thrown or any track medal I’d ever won.  We went out to admire the big Tom that “took a dirt nap,” as dad later so eloquently put it, and hugged again.  Standing there on that unforgettable morning, I knew what life was all about.  It wasn’t about parties, paying bills, petty differences, or even harvesting a spring turkey.  It was about reconnecting with my old man and sharing that precious time with a loved one.

Since that fateful spring day, a lot has changed, but a lot has remained the same. Dad and I still like to have our petty arguments and mom still has to play referee now and again.  I suppose that’s just our unconventional way of expressing our love for one another.  But we all have a new focus now.  I had a son of my own, and as I watch him grow, I can’t wait to create new memories with him in years to come.  He’s already become Grandpa’s huntin’ buddy, and it looks as if he’ll be going on his first turkey hunt before too long.  As I look back on that day and as I look forward to the journey that lies ahead, I think to myself, this is more than a hunt.

This is a story my son sent me in handwritten form.  It has found a place in my heart and scrapbook and has earned a spot to replace my monthly article in this great publication. I will again have an article about my pursuits in the outdoors next month.  Just a reminder, I am booking ICE OUT MUSKIE TRIPS NOW!  My calendar is filling up quickly for a chance at an ice out monster.  If you are interested in sharing some time in my boat this spring, you need to contact me soon as spots are limited.  You can call me at 309-267-8309 or by e-mail at trolling@mtco.com.  Last spring was a year to remember with many fish over the 40 inch mark hitting my net.

SEE ‘YA ON THE WATER OR AT ONE OF MY SEMINARS AT THE BASS PRO SHOPS SPRING CLASSIC NEXT MONTH.