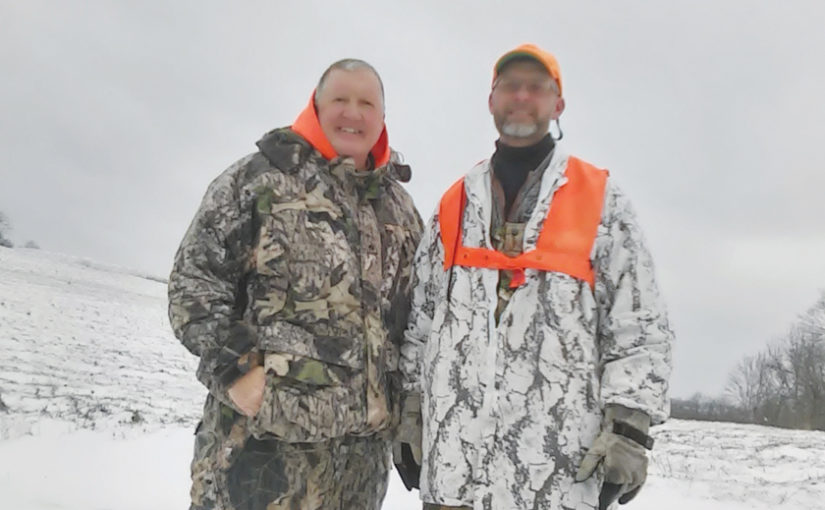 My old hunting partner and good friend John Kolash called with the request to join him for the Gun Season opener in Pennsylvania.  Why would I, a seasoned Whitetail Hunter, although a not so successful one, give up the second Firearm Season in Illinois for such a trip?  After all, the deer inhabiting the great state of Pennsylvania are not of the same size and rack characteristic of my beloved Illinois variety of the species!

From past experience the winters in PA are cold!  The wind does not abate and the snow cover is almost always present.  Hiding behind the lee side of a Red Oak on the side of a mountain to break the wind is not the most pleasant hunting experience one can incur!  The six hundred and fifty mile trip over the once proud interstate system, now relegated to only a slight improvement over the Santa Fe Trail surface can be treacherous in winter!

Although the opportunity to shoot my 7MM Remington Model 700, a real gun, was enticing, where the bullet would impact, with my abilities, would be suspect.  The market rumblings over the last election results were not enriching my personal financial sheet and the cost, although reasonable, would be a factor.

My last hunting adventure into the state of PA was perilous as my ancient four by four decided to cease being just that as we climbed the snow covered mountain road.  After noticing we had no four-wheel drive, an attempt was made to back down hoping we would slide off the road on the mountain side not the downhill side leading to a “Movie Scene” truck rolling sideways down the mountain! Luckily we accomplished getting stuck in the ditch on the mountain side.  A local equipped for such conditions yanked us out and we were at least pointed in the downhill direction as we slipped down the precipice!  To add insult to this flatlander, at the bottom we encountered two semi-trailer rigs pulled over attaching chains to their tires with the intent to haul oil off the same slope in tank trailers!

Of course, the decision was made to go!  John instructed me to stop in Clarion, PA at the local Wal-Mart to purchase my deer tag.  He was insistent – get in line and be nice, this was the day prior to the opener and the experience would be humbling?  He was correct.  Although number seven in line appeared workable, the clerk operating the state game department computer was staring it down while her assistant was on the phone inquiring as to when it would again work!  I waited and waited, luckily WM has lived through the day prior to the gun openers in the past.  To avoid an uprising, water, coffee, cookies and donuts were provided!  I struck up a conversation with the ten-year-old in front of me holding his box of 270 caliber ammunition.  I asked his name and he pointed to the box of ammo!  Remington, he advised – his mother confirmed the statement and of course this was the brand of choice in his estimation – he was well versed in caliber selection and I feigned knowledge on my end!   Finally, success came, my tag was secure.

The opener was no exception – cold, windy and snowing!  John, a strong runner, shot up the hill with me in pursuit.  He waited as I stopped every ten yards to catch my breath!  I was already cold! Remarkably, soon thereafter, a doe and her two yearlings approached within yards of my location and although sure a Buck would follow – none materialized.  For the next three days, John provided great spots for me to ambush a Buck but success did not come.

He provided great evening meals and with both he and his son, Justin, listening to my series of deer stories, I was in heaven.  As a youngster reading “Outdoor Life” and “Field & Stream”, I dreamt of going to Pennsylvania and now I was actually experiencing my dream.  John provided a day trip around the area pointing out the old Deer Camps and how the locals proceeded to gain success. His stories renewed my memory over the magazine articles read as a boy.    The snow covered rutted up roads were traveled apprehensively as the danger is more pointed than the flat lands of my home!

A local Bear Hunter displayed pictures of the Boone & Crockett qualifying Black Bear taken during the recently completed season.  The Beast was taken on the farm I had actually hunted during my stay.  John did not warn me of the possibility of running into an eight hundred pound Black Bear while in the woods!

Most who know me will attest; strong concentration is always given to acquiring success in the field.  As my eyesight and hearing fails and the cold wind and early mornings hunts become tougher, my appreciation of the other factors involved in the great outdoors have come into a greater focus.  Friendship and camaraderie along with the sense of my invincibility looming greater create a wider sense of appreciation for the wilds and the friends created over my years.

As I traveled the mountain roads toward home, a light freezing rain/snow mix pelted my windshield; the semi-truck rig in front of me proceeded with caution, I followed his experience to ensure my success.  Sure, I would have liked to shoot a big PA deer but the experience with John and his son, Justin, for the few days afield created a greater sense of satisfaction.

John had success just minutes before the end of the firearm season after my departure by shooting a PA buck!  Having seen the tough conditions the locals endure in the pursuit of the whitetail, I learned just how easy I have it in Illinois.  I have no desire as the Charlie Daniel’s Band lyrics exclaim of ever laying my hand on a Pittsburgh Steeler Fan or a PA Whitetail Hunter!