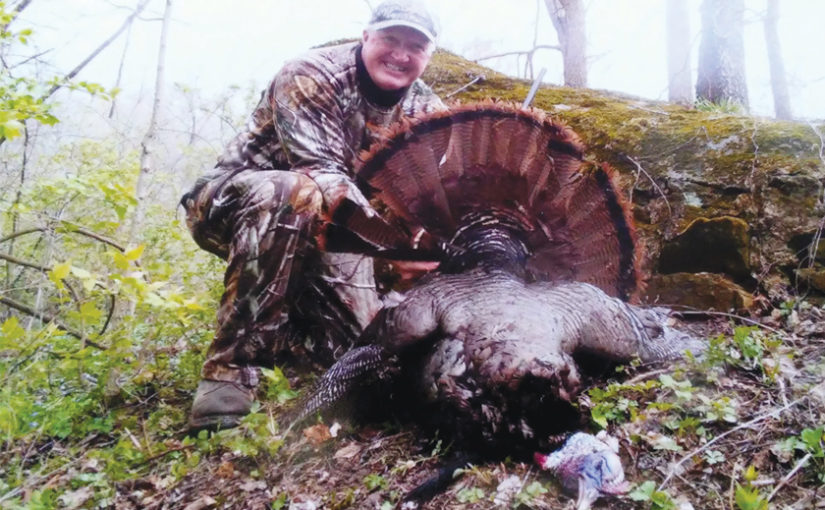 Four Jakes approached my two-decoy spread with apprehension!  Why the fear?  The lone Jake decoy could not fend off all four of the inquisitors!  After much close examination, they wondered off into the woods to the South.  After a strong sequence of cackles from my diaphragm call – they quickly reversed course and reentered the field with additional gobbling coming from the West and close!  Where there more Jakes?  Suddenly, four long beards appeared from the West and walked into the field within sixty yards of my spread!  Now all seven birds were in view and vocalizing to wake the dead.  The four long beards, although tantalizingly close but were they within range?  They continued their trek, with the largest and the last of the group wanting to break formation and investigate the lone female decoy.  He acted as if a mallard among a flock wanting to break formation and land but would continue to pump no matter the desire of the caller!  The end result was to watch all participants walk from the field into the woods to the East and vacate my location!

Although dejected, the wait continued as from past experience a mature bird may slip back and visit after excusing himself from his amigos.  After sufficient time elapsed to confirm this not being the case, a chase plan was executed.  Knowing the terrain, a half circle was planned to keep above and to the West using terrain and vegetation to hide the stalk.  While edging the woods, the flock approached with the four long beards leading the brigade!  Caught standing in the open on the woods edge – my silhouette was unmistakable, but no movement was contemplated.  With gun at ready, the birds approached stealthily when the first noticed the blob in the field where it should not have been!  Like kids in lunch line, his partners almost ran into him but now with heads erect my good luck had run out!   The shot was questionable in length but with all four heads within the potential patterns reach – any shot was ruled out!  Good Luck had turned to bad luck on a dime!

Despite multiple hunts, no gobbler had complied with my calling.  What initially seemed to be the perfect season was now the opposite!  Determined to find success, a set up used many times in the past was chosen for my ambush.  Although overcast, no rain had fallen during the hunt, but any sound of a turkey was not forthcoming!  A lone hen decoy used as bait was fighting the wind with little success – a stick was used to shore up her position, surely one leg crooked and longer than the other would not frighten a potential suitor!  Waiting with no action was excruciating – was my existence here to be used as a Tick and Buffalo Gnat playground only?

Finally, a gobble to the South East! Would the bird follow the valley to my location?  Slowly but surely the sound of his every twenty-minute gobble appeared to be edging closer!  One cackle sequence was initiated followed by very soft purring – maintaining silence now was painful but necessary.  Finally, movement was noticed in the brush directly behind my location and the bird appeared in the field.  Reasoning he had drawn to my call based on his approach, but could he see the decoy?  Based on the thickness of his beard and the coy/suspicious nature of the previous birds encountered, much doubt emerged over his completing the approach any closer – as veteran hunters will attest, this was the moment of decision.  Is the shot close enough with the necessary lethality needed to get the job done?  Determined my decision was sound, the trigger was pulled, and the bird folded!  Now back in the ranks of a successful turkey hunter again, I was elated!  The bird was thanked for his cooperation and sacrifice as he represented a new chapter of life for me after my recent heart procedure!

While driving from my hunting location, the green hills above contained the Burial Grounds of Indians from many generations ago!   The landowner had forbidden any future archaeological disturbance of this hallowed ground.  The difficulty of my success this season would pale in comparison with those who hunted this area in the past, but I felt fortunate to have experienced success on such wonderful ground. This memory deserves my reverence!