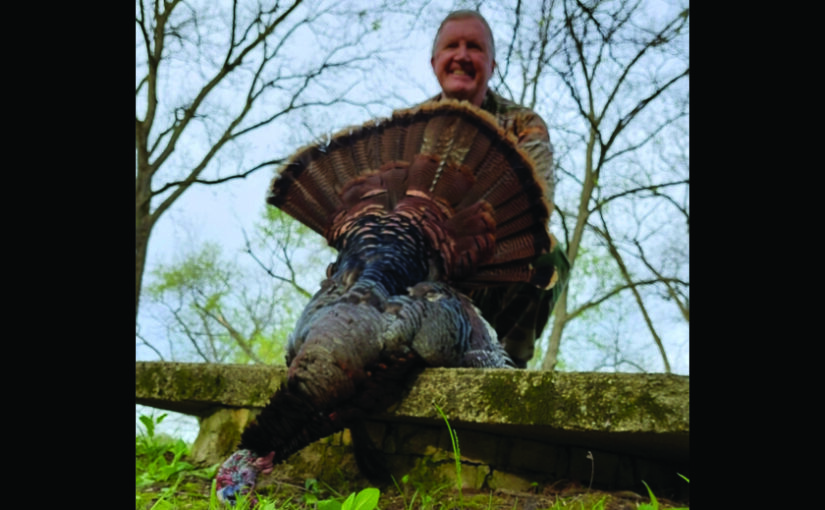 The sun was beginning to filter through the mosaic of eastern sky cloud formations.  It seemed as if time was at a standstill awaiting the darkened outline of trees to come into focus.  Finally, a dark object materialized in the tree top canopy silhouetted against the morning sky – the hanging beard and outline confirmed the object as a turkey!  Even better, this bird was not one of the three vocal birds spread before me!

Prior to my climbing the bluffs along the Illinois River Basin this morning, the thought had entered my cranial matter to give up on this season and find another activity other than Turkey Hunting.  It had been a good run since my first successful turkey hunting experience twenty-six years earlier but all good things eventually come to an end!  Possibly an endeavor bearing monetary compensation rather than heartache and frustration or at least something less demanding such as Trap Shooting or Fishing would be satisfying!  The competitive spirit within would have none of this!  Besides, each choice would still be driven by internal competition!

The morning started in sheer darkness, meaning my entrance into the woods was in total anonymity.  Normally, the elevated wind would be a hindrance for a calling set-up but welcome this morning as I was gambling on the location of the roosting birds based on the strong wind and terrain knowledge acquired over my years the birds would use accordingly.  The damp, rain-soaked forest floor further aided my advance.  I through caution to the wind and entered, ever so slowly, into the most likely roosting area gambling for good luck!

My gamble was rewarded by a booming, deep throated gobble coming from my intended destination!  A course was charted to put my location close to where the bird may glide to earth to begin his day.  During my advance, two additional birds sounded to the North and South only yards distance, this explained the very early vocalizations heard in the still dark woods – these Toms were in competition!  All three birds were close, possibly even within shotgun range!

I took refuge behind a curved tree trunk to break up my outline and sat, leaned against a straight sapling removing my back and fanny pack.  No need for a call.  The need to stay motionless awaiting daylight was paramount – I was in their realm and my rudimentary senses were no match for an alert Boss Tom intent on hitting the ground and beginning his search for love!

The three birds continued to project their campaign promises, each responding to an alternative candidate.  Experience this season, to date, found little gobble activity on the roost but after becoming earthbound – shutting up; especially with hens!    A searching gobbler would only vocalize weakly and intermittently making location identification almost impossible!

After what seemed as if an eternity, daylight pervaded the woods. Two of the three vocal birds could be seen from my location with the deepest and most aggressive bird right in front of me!  Don’t goof this up!  React to their actions!

Finally, the closest bird shifted his location in the tree and was more vocal in his tree calling light sound machinations.  He was simply preparing for landing, suddenly off he went, gliding down within fifteen yards of my location!  Too Close!  My gun barrel was on the wrong side of the curved tree trunk hiding my outline – at this range he could ascertain my eyelids blinking!  I took the chance and moved the gun around the tree trunk ever so slowly fearing detection, He reversed direction and headed north requiring another repositioning of the gun!  His movement was away from me and losing elevation.  I would lose sight of him rapidly in mere moments – my gut churned at the possibility of losing this opportunity!

Finally, his head became visible through the Greening Bush Honeysuckle.  The gun barrel was quickly put on target and the trigger pulled!  To my dismay the bird quickly ran directly down the hill obviously unaffected by my shooting prowess!  Panic set in and I jumped to my feet with the emotion of lost love and of being a total failure!

The bird then took flight climbing for the safety of the tall trees when my instinct took over and I followed the bird with my Gun and shot!  The bird folded and filtered down through the limbs much like a successful shot on a jumped Mallard!  He was finished.  Ecstatic over success and frustration over my handling fluctuated in my mind.  One thing for certain; my successful string of Spring Turkey Hunting was still intact! It would not be broken this year!