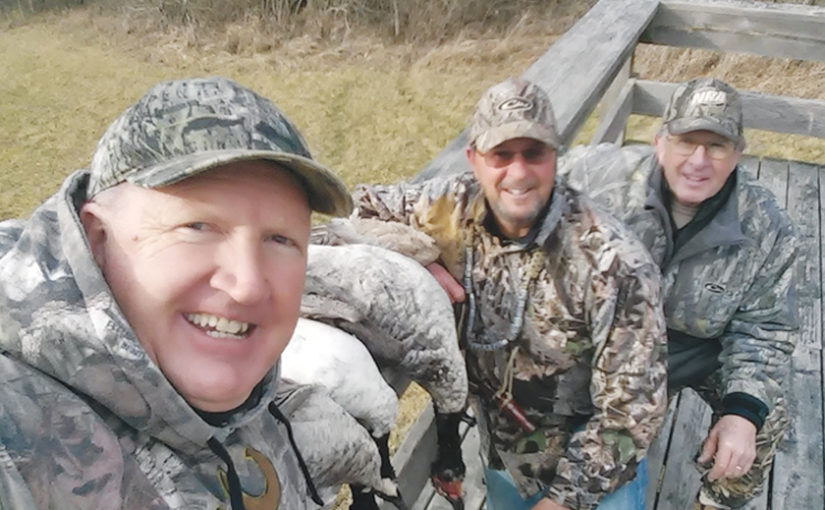 Following the path cut through the skim ice by my hunting partner as we waded towards our blind location three hundred yards distant was not overly burdensome.  Especially since the sight and sound of hundreds of Canada Geese and Ducks evading our advance continue to build our anticipation levels to near overload!  A thick piece of broken surface ice jabbing into my thigh along with burning lungs brought back the reality of the moment.  As any Waterfowl enthusiast will attest, exhilaration over the mere prospect of a quick and successful hunt is a strong motivator!  This had all the makings of such an event!

After finishing the quick decoy spread, organizing the blind and improving the brush to enhance our level of ambush, we jabbered like teenage girls conversing after being asked to the Prom by the boys’ of their dreams!  My host this morning was Jeff (J. J.) Sykes, a retired Automotive Sales Specialist, had an excitement level reminiscent of his best sales presentation on a car he genuinely believed in and knew was right for his customer!  The birds should be filtering back into this area momentarily.   After much cajoling from J. J. in his call to fellow hunter Gene Shurtz asking him to join us, he finally agreed and met us in the blind around 9:00 AM.

How did we get to nine o’clock with no birds down?  The Mallards, Pintails and Teal drifting back into this area would keep up entertained all morning as the ducks seemed to know their relative safety as the season on ducks was now closed.  High and large groups of Snows and Blues drifted overhead but only the Speckle Belly groups would tease us by showing promise but would never close.  The few Canada groups although working tantalizingly close did not “buy the program” and we were still on zero as the morning matured!

The decoy spread was determined to be too close to our time and season ravaged blind so the decision was made to move them out a few yards.  You guessed it!  At the same time a pair of Canada Geese came in low and tail wind aided fast from the South, appearing to want into our spread even with J. J. standing in the center of it!  Fearing they would realize their error once closer to the spread, I snapped a shot as they flew overhead but the results were as if throwing a rock at a speeding F-16 Fighter Jet – too late and too far behind!

This last day of the regular Goose season was proving to be a bust.  But this group of retirees found ways to entertain ourselves with the gossip only water fowlers’ can muster tempered by tales of past success!  Jeff and Gene pointed out the spots visible from our blind they had hunted on their first trips afield over thirty-six years earlier.   I remembered my first trip to this area to hunt ducks was now thirty-two years distant!  It was good to be afield!

A large group of Geese circled high overhead but appeared to be of Snow/Blue variety coupled with a mess of Specklebellys thrown in for good measure!  But from the mass emerged two geese intending to take advantage of our spread by circling down wind and dropping altitude in preparation for landing not unlike a pilot of a Piper Cherokee would do in their preparation for landing routine.  My first shot was perfect but the bird selected did not appear to get the charge?  As he turned to take advantage of the wind for escape, my second shot folded him!  The other bird fought for distance and altitude but at two hundred yards distance dropped from the sky and splashed into the surface frozen water forcing a plume of spray shooting straight into the sky!  Our group was skunked no more!

A few minutes later a group of eight Canada Geese worked into our spread – only six returned to flight!  One was sufficiently alive to evade our retrieval efforts despite Gene’s half mile chase after him!  The time to end the hunt had come and after the long walk through the water back to our earlier demarcation mark was completed, our regular season was finished!

I witnessed good sportsmanship from my partners in shot selection, strong retrieval efforts and toughness many in our sixty-something age group cannot match.  The birds were filtering back into the marsh and ultimate safety through the heavy wind.  The beauty of good hunting partners, fond memories and birds in hand made for a successful hunt for the record!