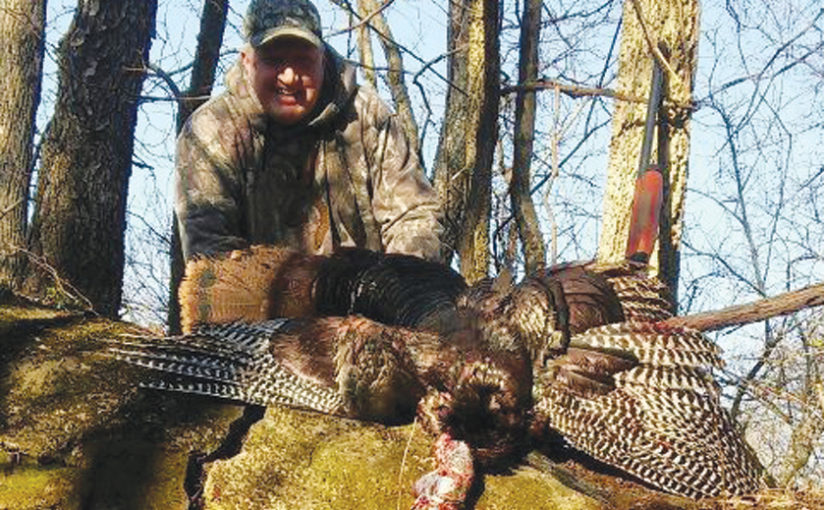 Madness in the Turkey Woods!

The pent up anticipation toward the Spring Turkey Season was soon to be relieved in reality.  Two spots with a strong history of success were before me when exiting the truck, but rather than waiting to pick one based on vocalizations heard on the roost, the decision was made to make the spot further west.  Continuing my trek toward this destination and after setting up against a Locust tree (trimmed of lethal spikes), a bird sounded off well to the East!  So much for good luck on selecting my spot!  Soon after light invaded the field, a bird sounded off to the North.  Glad to hear turkeys but one being in a closer proximity would be better!

Having no patience made fighting off the desire to work my calls to death difficult.  Light tree calls and finally a fly down cackle were accomplished followed by silence.   Now the sounds from the woods emanated from turkeys were subdued.  Did the male of the species have more girlfriends than they could handle?  Are they saving strength for later activities?  Will this be a hunt counted as a learning experience?  Being patient was tortuous!

Suddenly multiple vocalizations from the Southeast caught my auditory attention.  Was this a group of hens – suddenly a heavy gobble broke through the morning suns’ rays lifting my already sagging confidence!  Multiple gobbles ensued!  Keeping quiet was difficult but necessary.

From the East a bird with his swinging beard walked in almost point blank.  To swing the gun no matter how slowly would be probably impossible.  We were only feet apart!  Let him walk and move after he travels past!  Another gobble sounded off closely.  Not long thereafter, a foursome of males, all with visible beards appeared!  Having let the first bird move out, was tough but this foursome surely would produce an opportunity!  Two of the birds were in competition with each other – surmising this was the two elder birds of the flock, my concentration was on them!

The two excited suitors pranced sideways in full strut making me nervous as they were already well within range but my gun barrel was not in pursuit yet.  A group of mature birds, all within mere yards were now upon me!  The most aggressive bird, now my focused target moved sideways – leveling the barrel in an awkward angle the trigger was pulled.  The bird did not fold but ran!  A quick second shot did no better!  He took to flight into the woods but glided to the ground within eyesight.  Now my perfect hunt was a total failure after having not less than five gobblers all within gun range!  The surge of disappointment, anger and frustration combined to produce feelings of pure failure, only an idiot could produce this result!

I reloaded and slowly trekked over to the edge of the woods to confirm no bird lay mortally motionless before me!  Walking back to my spot was truly a walk of shame worse than a Coed after a night of debauchery without meaning could feel in the morning after in the walk back to her living quarters!

Looking at the edge of the field, there before me appeared to be a bird, head alert but in a sitting or nesting position!  He obviously could see me – hope sprung eternal.  Don’t screw this up!  I walked away as if disinterested but upon entering my hideout, circled around his spot and Indian stalked to within less than thirty yards from his position.  The barrel was leveled ever so slowly and shot touched off!  The bird was done!

The bird, a fine specimen no doubt, was thanked for his sacrifice and my apologies for his tough demise.  After organizing my turkey hunting goodies and tagging my prize, the journey out of the woods was made with the glow of success surrounding my person!  I thanked our creator for my noticing the bird and being able to finish my previous shortcomings in success!  Happiness through the pursuit of this bird returned to this Hunter with the vow to sharpen my abilities to avoid another scenario experienced this morning!