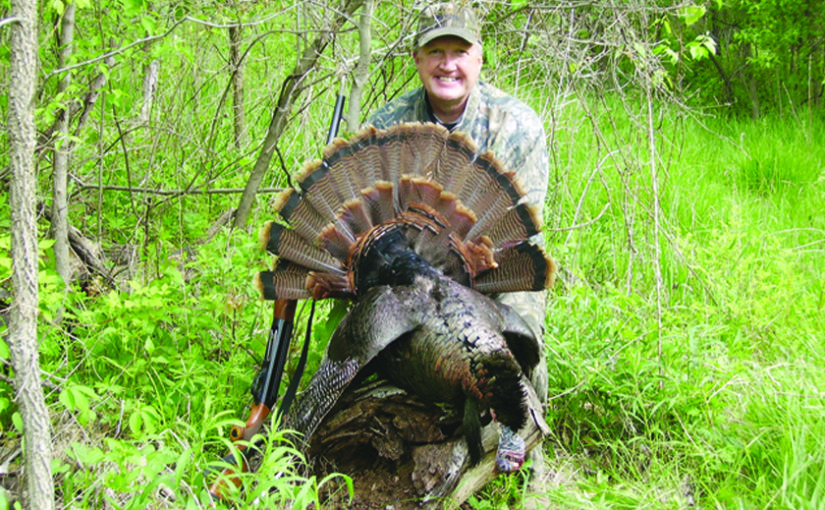 The darkness of the morning was as thick as cowboy coffee.  The wind howled and curled the upper limbs of the swaying trees as if to scare one from venturing forth into the wood!  There would be no question as to whether to bring the rain suit or not.  As the first rays of light attempted to overtake the darkness, I ventured forth and unbelievably a gobble was heard from the roost off to my south!  With greater than normal haste, progression was made toward the sound.  The powerful wind hid any sound of movement through the woods.

Knowing the terrain, the bird’s roost was pinpointed.  My advance was closer than usual based on the weather conditions and my features were hidden behind a large oak tree only yards from the roosted bird!  Too close!  My stand would be here as further movement would upset the bird.  Facing away from the bird, my tree call was slight – the bird hammered at every sound and would surely fly down to the sound as if on a kamikaze mission ending the hunt promptly!

The bird hit the ground close enough to feel but unable to turn and peer his direction – maintaining motionlessness was paramount.  As is often the case, the bird walked east into a ravine out of my life sounding off intermittently as he progressed!  In fact, he was progressing toward my hunting partner this morning whose set up on the primo spot given to him by yours truly was working!  Why the bird chose this option was beyond me!

Shortly thereafter, a shot penetrated the wind, indicating the success of my partner.  My subsequent activity had proved fruitless.  Back at the truck, the sequence of events had occurred just as suspected and one Tom was hanging by the pole!  The weather had begun to subside and although threatening – no rain fell at all during the day.  After coffee and sandwiches a bird sounded off to the east.  I advanced toward the sounding bird and set up in anticipation of an ambush.  My partner hung back and attempted to lure the bird closer with the sweetest music he could muster but the effect was quite the opposite and the bird reversed course walking away and talking all the way!

My disgust was palpable – the bird must be sought if by pure stalk!  The bird had entered into the valley headed east – the wet ground made footsteps of no sound.  I followed knowing the thick wooded terrain would hide my advance but with the superior senses of the turkey, my chances seemed slim.

The bird moved north along a hillside – I followed seemingly only seventy-five to one hundred yards distant.  This was too close based on the openness of the wood!  Choosing to move back and to begin a flanking movement about the bird’s location seemed best.  The gobbles had stopped.  Had he seen or heard me?  This was probably the case!  I paralleled the birds last known location by walking just over the horizon of the hillside above him but still no sound.

Suddenly, the shrill cry of a Red – Tailed Hawk pierced the air above.  The turkey shock gobbled below giving away his location!  Because a small ravine penetrated the larger hillside holding the turkey – I worked on hands and knees toward a large oak, hiding my outline in the small ravine where I would peer over into that hillside to locate my prize.  Slower than molasses was my advance!  Once in position I peered around the trunk of the large oak ever so slowly inching my head forward to see into the hillside.  Nothing!  Suddenly, the top of a turkey’s head materialized twenty-five yards distant.  Just as quickly it would disappear!   I rotated the gun into a shooting position and waited.  I wanted to rise to confirm his location but knew any movement at this range could backfire ending my stalk!  The top third of his head broke the skyline as he stretched.  Do I risk this shot at such a small target?  The bead was held dead on, and the trigger pulled.  The eruption of sound was met with silence – I raced to the shots’ location to find my bird immobilized from the encounter!  Success!  Quite unorthodox but success nonetheless!  The walk out of the woods was one of my proudest moments still giving thanks to the bird for providing the action of the event!