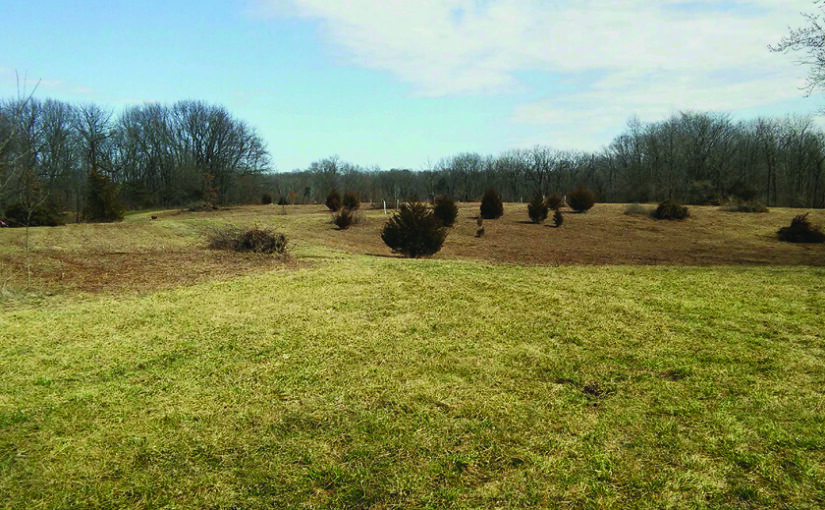 Rewards in the Woods and Fields

Having just completed cutting the overgrown CRP fields, already de-treed, if you will by a Skid Steer with Jaws on steroids a week earlier on the four inch plus saplings doing their best to overcome the void in this perfectly normal field, my seven-foot Rotary Mower (a Bush Hog to country people) pulled by my old Rock Island born International Harvester Farmall Diesel 806 was to finish the growth left!  My excitement to complete this task was tempered by apprehension as the old girl, Big Red by name, is very temperamental in the less than fifty-degree temperature zone of this March day as would be expected for a fifty-four-year-old machine!

After checking all fluid levels, adding additional diesel fuel (after another trip to town to fill two five-gallon transfer tanks), adding Hydraulic Fluid, greasing all points on tractor and implement and reinstalling two fully charged old six-volt batteries the moment of truth was upon me.  Although the high temperature for the day was to be sixty-three degrees, we were not at that level yet.  My level of confidence was high as the windows on the Universal Cab had been cleaned expecting success!

The lights on the dash lit up but depressing the starter button would be the truth teller!  Once depressed, nothing happened but this was not totally unexpected after a long winter nap!  I jiggled the gears and parking lever to create a better electrical connection.  A brief grunt was heard, and all went dead!  Normally cursing my misfortune is initiated but going back to the starting sequence was done instead, suddenly the fact came to me that the one battery terminal connector had not been tightened.

After checking all four terminals, the countdown to start was again initiated!  She roared to life in an instant as if ready to kill John Deer 4020’s from the onset!  My journey to the farmland on the highway was now underway.

Having grown up on a small Indiana Farm and helping my father work the ground with old equipment, often needing repair and cajoling to maintain running condition, the memories of my father working hard all day at his factory job and then coming home to farm flooded back.  His lackadaisical son had remembered some of his teachings and methodology on all things mechanical but only through the miracle of osmosis rather than interest.  My ignorance now is the result – I should have paid attention! Although he is gone now Twenty-five years in May, his sacrifices are now apparent to his sixty-four-year-old son!  The beautiful sunlit day ahead overrode my tears with the thankfulness for his life!

The old tractor performed without hesitation with the diesel powerplant never missing a beat.  The satisfaction of feeling the power of the machine at my disposal was exhilarating.  Running a so called thirty-seven horsepower Compact import tractor would be like looking at a girlie magazine to spending the night in a French Whore House in comparison!   The next morning, in preparation for another day of work, a tree limb three inches in diameter and eight inches long was impaled in the top of my radiator grille!  I could not remove it by hand!  After taking the metal grill cover off and prying the limb from the metal grid and frame and a few bends from the blow of a hammer, we were back in business with no damage whatsoever!  The metal framework of the grill cover was a mere seventy-five pounds!  A newer Spaghetti Tractor would have been disabled awaiting repair!

A Red Tailed Hawk took up residence in a nearby tree welcoming the ground being cleared exposing some of his favorite prey, the field mouse, now scurrying for cover!  Rabbits exited the piles of pulled trees if I came too close, they were using this cover to avoid predators.  Snows, Specklebellys and Canada Geese could be seen in their migration north.  Tight evergreens were left in the fields to give songbirds cover and protection.   Several whitetail shed antlers were noticed and collected from the cab of the tractor as I progressed.

I know this work being completed on my friends’ farm to build pollinator acres and enhance the quality of habitat to benefit all wildlife is beneficial as opposed to a simple food plot to ease the taking of game.   The simple enjoyment of respect for the land and life as learned from my Grandmother, and the tractor training from my Father was recalled along with other favorable old memories drifting back as the diesel burned and the pinion gears whined!