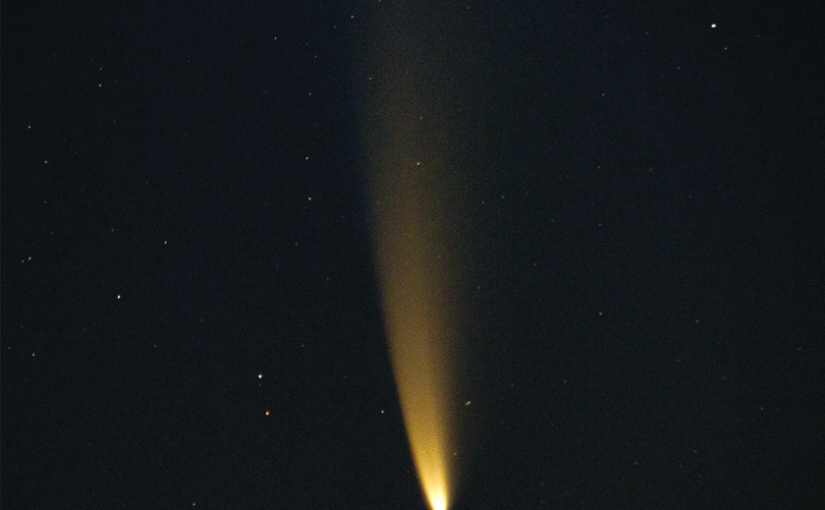 Early morning forays are a staple for the outdoorsman but the 1:00 AM alarm startled my sense of physical location as I reached to dismiss it on the phone lying on the floor next to the bed.  The sky was dark and the temperature was still quite warm this July morning.  The intent of the early wake-up was to catch the rise of the comet Neowise as it became visible from the horizon to the North East.  The comet will pass sixty-four million miles from earth later this month on July 22 and July 23, 2020 which is the closest it will come!

The comet would be visible in the southern Indiana morning sky for the rest of this week in the early morning hours if the weather held and the skies were not overly hazy.  Not really visible by the naked eye, one would need telescopic equipment to locate and observe this event not scheduled to return for another seven thousand years!   My younger brother, Scott Herschelman, interested in this type of activity and with the use of his equipment, the comet could be seen with a little luck.

We drove to our intended destination near the “Blue Grass Wildlife Area” near Elberfeld, Indiana to take advantage of a hill offering a good North East viewing direction free of hills and woods and the infiltration of man – made light emanating from any city or town in the distance.  Scott, the smarter of us two brothers was taking the advice of a fellow photographer, Tom Barrows, who had located this spot earlier and had actually photographed the comet the previous morning.  Tom Barrows, the leader of the Evansville Photography Club was invaluable in helping us locate the comet after we met him on the very isolated gravel road to set up our equipment.

Scott mounted his Canon 6D camera with a Sigma 150-500 magnification lens on his heavy duty tripod.  The camera was set to open the lens for ten seconds of exposure to catch the faint image of the comet.  Numerous shots were taken in an attempt to locate the intended target before success finally came.  Tom was invaluable in giving us instructions on the comets’ location as he had found it through his camera lens earlier and was tracking its’ movement through the sky.  Time had to be managed properly as the morning sun was beginning to illuminate the eastern sky and would cancel our ability to see very shortly.

Scott set up his huge CPC Celestron 1100 scope in the hopes of finding the comet for better viewing.  This telescope takes two people to move and will track the intended target through the night time sky if set properly!  The scope when targeting the moon will only provide viewing on sections as the power magnification is so large an object the size of the moon cannot be seen in entirety through the scope!

Although we could not locate the comet in the larger scope by scanning for the target, we focused on several of the planets such as Jupiter where the bands were clearly visible and eye of the Great Red Spot, a great storm, was also seen.  Five of Jupiter’s’ sixty -seven moons shone in the near perimeter!  Saturn’s Rings were visible through the powerful scope and the moon surface exhibited her strange contours as I peered through the scope!

The morning light finally ended our viewing session.  The howls of a coyote pack off in the distance and the morning chatter from a hen mallard and other birds beginning to vocalize brought us back to the wonders of our piece of the planet we call home.  The old Chevy pick- up truck of Scotts was probably the only one with a large telescope roped into the bed as we traveled down the gravel roads and I felt the unmistakable feeling of movement on my skin as I picked the tick from my neck line.

Being with brother Scott is always an adventure.  Later in the day he fired up his Master Craft Ski Boat and we went on the Ohio River to resurrect my skiing ability.  Unlike riding a bicycle, my skill set did not return and was somewhat diminished but I enjoyed watching brother Scott work his magic on the single ski and he promised on the next trip he would prove his barefoot skills even at his soon to be age of sixty!  I was glad to see the comet on this trip as it will be another seven thousand years before it returns, a mere moment in the Universe!