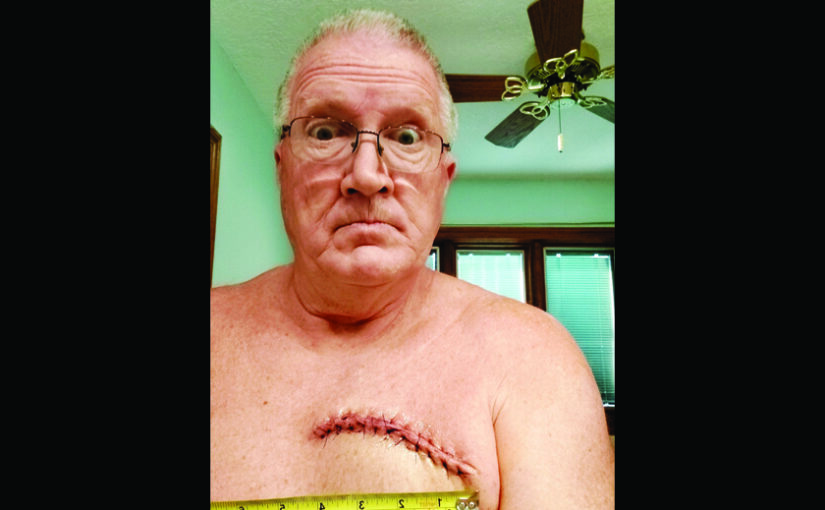 The diagnosis is Melanoma was the first sentence contained in the recently completed pathology report!  Just days earlier, the surgeon, Dr. Singh, informed me the tumor removed from my chest was not a routine growth or cyst as originally thought, but a form of carcinoma or melanoma currently under analysis by the foremost lab in the United States specializing in this analysis!  We are hoping for a carcinoma diagnosis explained the Surgeon.   Hoping for a Carcinoma!  This punch in the gut was not desired.  I was aware the lab work or pathology was very slow in return as the surgery was now two weeks old and apprehension over the pending result was mounting.  Unfortunately, the worse of the two possibilities was now confirmed!

Eighteen years earlier, I was informed through biopsy results, at the age of forty-seven, was indeed Prostate Cancer. This battle was won through surgery, radiation treatments and persistence. I now carry lifelong scars both real and emotional in nature over this previous episode with cancer, and the lifelong negative effects on my physical being and life!

This new battle for survival is against a much meaner and powerful foe – Melanoma is measured in severity by the thickness of the Melanoma growth usually in mere millimeters.  My recently removed tumor is measured in centimeters, even inches!   Most of us have experienced the horrors of the big “C” either through personal or experienced by relatives or those close or known to us.  I have carried individuals to their gravesite whose bodies were decimated, even mutilated in an attempt to beat this perverse and evil antagonist!

For those who know me, I am not a “Bidenesque” ideologue driven by fantasy, but a “Reaganite” realist driven by fact and result orientated focus! I wanted like-minded individuals to fight this battle with me!

The upcoming fall seasons now have a subdued focus, as the hope for a giant Whitetail, or a successful Waterfowl season, now have less importance. Interchanging with my two-year-old Granddaughter, Mycaiah Jaymes Herschelman with her constant growth in both communication and manipulative ability, including defiance are now very focusing.     Time, Experiences, Relationships are now the realities of your existence coming into extreme focus as your mortality and role in life are questioned.

This tumor is present about one-hundred times in a year, affecting one in about three and a half million people in the United States explained my surgeon, Dr. Liu!  The body of research is limited as treatment, analysis, and morphology is scattered both physically and analytically.  My case will be challenging!  The foremost Oncology Specialist, Dr. Wade, one of the founders of the “Cancer Care” facility in Decatur, Illinois considered “World Class” in the treatment of Cancers was now focused on my case as well.  Dr. Singh who performed the initial tumor removal explained the positive – through your spouse, Kelleye, a nurse in the Endoscopy Unit at the hospital, who is well respected and known to all of these doctors, you are getting quick, thorough, and caring attention from these exceptional men of intellect and medicine!  You have friends in high places!

The PET Scan revealed no “Hot Spots” within my body!  A fact almost incredulous to the doctors, in my opinion, since this tumor had grown and inhabited my chest for over a year since notice!  The next action was to go back into the original tumor site, through surgery, and remove tissue until clean margins are obtained.  In addition, through following radioactive dye injected into the tumor site to identify the Lymph Node where drainage from the tumor site would migrate would be removed for analysis.

Remarkably, the surgery was highly successful with only a small amount of my Pectoral Muscle Removed.  Dr. Liu assured me – I would be able to accomplish my weightlifting goals (somewhat subdued for a sixty-five-year-old man) in time although delayed temporarily!  The Lymph Node analysis came back as negative – another miracle, in my opinion, quickly relayed back to me from Dr. Liu!

Dr. Wade, in his treatment recommendation, told me, Kelleye and my daughter, Lauren, the chance this cancer would return within the next three-year period was about one in three.  Through his recommended Immunotherapy, through a series of infusions over the next year period, my chances for the return dropped to about one in ten!

The challenge has been accepted!  I recalled my radiation treatment earlier in life at age fifty-three when I would do one hundred push-ups at a time while in the waiting room before treatment!  Both Doctor Liu and Wade motivated me with their notice of the fitness of their patient, I doubt one hundred push-ups are in my future, but I will undergo treatment with humility and respect but a little defiance against this foe similar to that exhibited by my two-year old granddaughter as Well!

My thanks to the tremendous Doctors in my corner!  Men of Superior Intellect, Training, Motivation and most importantly Faith!

Always hoping for good luck in the woods each season – but I will not be dismayed if it does not come, for I have used it all in the Doctors’ Office and Hospital!

Long vigils on the tree stand, duck blind, goose pit and fishing boat along with basking in the sun to accommodate your tan, sitting on the tractor for farming or yard work for long hours and tanning booths all contribute to the rise in the instances of Melanoma within the last thirty-years in the United States – Think about It!  You are up against an enemy that will not die nor retreat!  React accordingly!