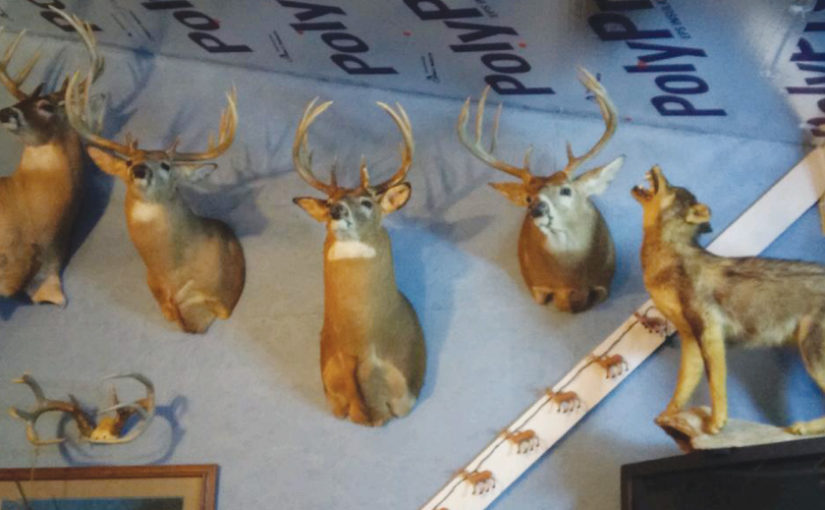 More than a Collection!

Over my span of years, many trophy mounts have been gazed upon by yours truly.  Sometimes the display is simply on a garage or barn wall, basement exposed wall stud or stairwell wall.  Some trophy mounts are displayed in very sophisticated show room settings where lighting and color are professionally coordinated to accent the animal or fish on display. Others may be forgotten collectors of dust hanging on the wall!  Often the “Game Room”- using the term loosely is the focal point used for both entertaining and museum purposes.  The owner is often quite willing to relay the story behind the Buck or the important details of those specimens on display!

Three years earlier, one such building housed an array of trophies and mementos important to the owner came to my attention.  The crackling wood burner was red hot but not able to keep the chill from the November air that evening where my hunting partner, Eric Worley, and I had been invited to a fish fry by his neighbor, Jeffrey Rademacker.  Stepping into this building, the big screen television caught my eye but behind and above the bar, the whitetail mounts focused my attention! Shed antlers were hanging and stored in and on all of the space within. Hornets nests’ in beautiful preserved states hung amongst the rafters and turkey beards where simply nailed to the wall by the dozens!  Giant snapping turtle shells adorned the walls with a few converted to wall mounted time pieces.  A coyote in full howling mode along with otters staring in curiosity at their onlookers kept ones attention!

The owner, a serious Cardinal fan, had mementos hanging but his Spouse, Vine, had worked a few Cub items of memorabilia in as well!  Jeffrey, a retired welder from Cat, immediately had my admiration as a “Man of the Woods” with his obvious outdoor acumen on display!  The conversation loosened as the beer intake grew but all present where successful outdoorsmen and outdoorswomen as Jeffrey’s spouse Vine’s trophies were equally impressive!  Trying to be not too obvious, my curiosity could not be contained as I wandered the room exploring the items on display.

Going forward to the present, the room has been enhanced with serious insulation and heat retention upgrades.  The trophies now on display are a little more organized but still keep your attention as you scan the room!  You now can wear a T-shirt rather than your hunting coat but the aura remains – heck you can sleep on the fold out couch if you like!

This years’ fish fry included neighbors and friends in attendance.  Shared photos from the trail camera shots, weather discussions, corn harvest and the condition of food plots along with just good old conversation about ones’ life history in the outdoors or otherwise filled the room as the crappie filets were eaten.  Home- made potato chips became addictive as a supplement to the just right spicy filets!  Jeffrey as a youngster, cooked in the old “Quiver Beach Inn” where in 1992 I and my hunting partners would motor up and anchor my duck boat to have lunch, scaling the sharp embankment to access the Inn.  Jeffrey was a loyal friend to the owner of the establishment, Bud Alvey, until his death years later.  The Inn no longer exists but our memories keep the history alive!

Jeffrey recalled the day his son shot his first turkey earlier this past spring and the excitement of both father and son over the event warmed the heart – he also expressed gratitude over the opportunity to hunt local farms where loyalty to him from the landowners overrides the profit motive to lease property for profit.  A fact that Jeffrey will reciprocate with his assistance when those landowners need help!

While some may have specimens on display from all over the globe, the game and fish on display within this abode would be second to none – a man’s history displayed through his treasures from the woods were as strong as his ethic and welders handshake.   I consider it an honor to be with the individuals at his fish fry as all are successful in hunting and life.