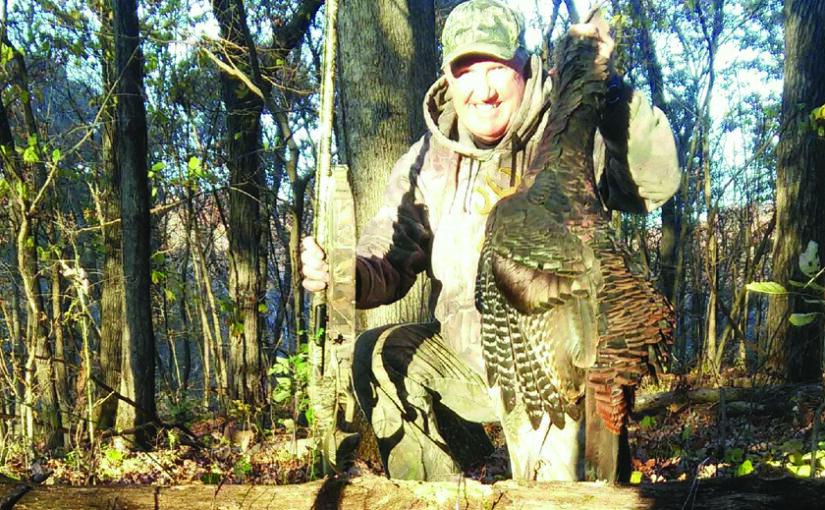 The view through the peep at my sight pin was painful!  Two trees between the standing Buck and my elevated perch formed a perfect V starting from the bottom of his chest to his back barely eight to ten inches wide at the top of the V!  The next step for the bruiser was to be down the ravine and out of my life.  Still nursing a bruised ego from my missed shot at a beautiful ten pointer the previous morning, the calculation of success for this shot was not good; but an errant arrow would be deflected early in flight posing no danger to the deer but a perfect flight would hit the vitals as needed!  The yardage was estimated at twenty-seven to thirty yards distant.  A long shot for this old man but still within my range of confidence!

Just seconds before this encounter a large eight pointer had walked the same path but offered no shot!  The nerves were wearing thin but still holding steady!  This was the second sit on this stand and action was peaking with the sound of deer just out of sight to the north, probably a hot female attracting attention from all the big suiters in the area!  Lady Luck has never been one of my companions in the deer woods but this morning was starting positive.  Having filled my fall turkey tag during the recently completed Fall Turkey Season gave a shot of confidence to my activities this fall but the elusive whitetail has been known to shatter the dreams of many a hunter as I can personally attest! Having recently escaped the tentacles of the Cardiologist and Urologist with clean bills of health, only the Dentist could find fault but a follow up appointment was set for January of next year eliminating or delaying any anxiety over missing another tooth!  Being glad to be in the woods was an understatement.

The focus for now was the whitetail.  This farm had produced several big deer over the past few seasons and with my physical sighting of many of this years’ deer crop feeding in the nearby bean fields, a renewed vigor was inherent within my limited cranial capacity.  The soybean crop in the nearby field had not matured as expected; leaving a smallish and still green plant the deer were feasting on accordingly!  Although the farmer was distraught over the lack of production, the feeding deer siphoning off any remnants of the growing beans was quite the attractant!  Since this farm was rented on a cash basis, the farmer’s problem did not negatively impact my earnings but was a positive for the large number of deer feeding during the early hours of morning and evening as well as under the cover of darkness.

The decision to shoot through the V a little higher on the vitals than normal to allow for more cushion space for the arrow flight was made, the release was triggered and arrow gone!  The ripping sound was distinct but had the arrow clipped the limbs or wounded a shallow root in the ground?  Time slowed as the Buck ran then slowed to a walk as the sound through the crunchy carpet of oak leaves told the story.  No crash or thrashing could be heard!  Almost immediately thereafter,  the sound of deer hooves in the field just east of my location focused my attention to reveal a giant buck crossing the open field in seconds as if called to the fray by the town crier!  Nocking another arrow and positioning my feet for a shot where he possibly could appear were completed!  As if more excitement was needed; the sound of feeding turkeys coming toward my position was evident.  A glimpse here and there of the birds revealed a group of Toms!  As is often the case, neither the deer nor the turkeys appeared within range of my bow.

Vowing to wait until ten AM to vacate my position could not be maintained.  Could the arrow be found to confirm either a miss or hit?  The decision to investigate won over and after one and a half hours, climbing down the tree sticks with bow in tow was completed.  The arrow lay on the ground as if placed there for display.  Blood evident on the arrow indicated a hit!  Scarcely a trail could be found but having heard his exit route, the decision to advance was made and after approximately forty to fifty yards blood was noticed and growing more evident as the trail materialized.  A quick glance ahead revealed the expired animal! This moment of confirmed success is only experienced a few times during one’s lifetime.  This days’ hunt will always be remembered both for the excitement and outcome.  A more grateful hunter could not be found!