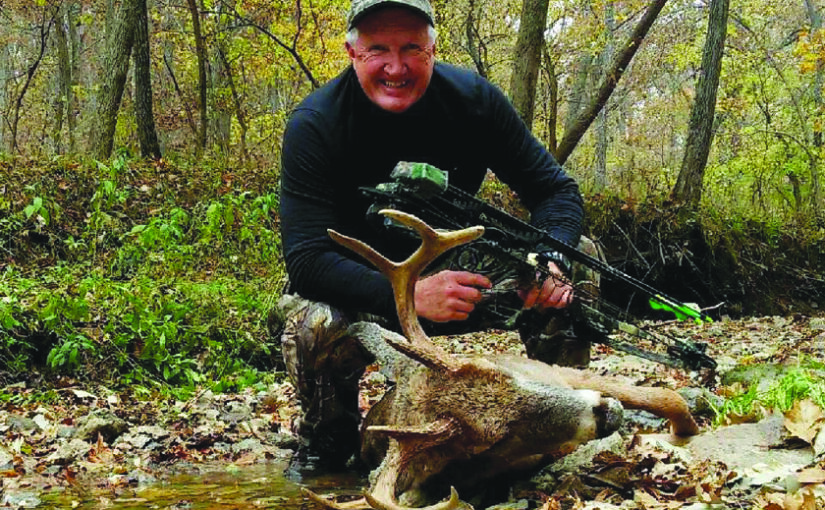 The overcast morning showed great promise as Buck after Buck materialized from the wooded terrain attempting to satisfy their yearning for an acceptable mate!  Was this to be a “Magic Day”, my description for a day where intensified Buck movement is noticed?   Suddenly, movement to my rear indicated a moving Buck traveling to the West climbing from a ravine indentation to the hilltop.  This deer had been seen previously and passed on allowing him to reach another year of maturity.  Not noticed was another more mature animal traveling closely behind following the same track!  Once noticed, that sinking feeling of being caught off guard was upon me as not enough time would allow preparation for a shot within my desired acceptable shot abilities!  Watching as the second deer climbed the hill putting yard after yard between us.  Finally, he stopped at forty plus yards quartering away from my position with a slight uphill stance, but no obstacles were present!  This was further by far, than any shot I have ever taken with a true hunters’ bow on a whitetail!  Just weeks earlier, my practice routine included taking fifty-yard shots and that were consistently on target.  The decision was made to put practice into action!

To date, this season had great promise but little obstacles such as a broken garage door spring entrapping our vehicles, a hole in my left eye from irritation and rough handling by my Grizzly Paw sized hands attempting to remove and insert the contact lenses.  Two days prior, while cutting a limb blocking my position acquired by climbing tree stand, my finger was lacerated leaving a blood trail but not the one desired!

With problems behind, the anticipation of unbridled time in the stand was finally present.  This time allowed memories to surface of past history and one memory seemed paramount.  My old hunting mentor, the late Bob Griffith, had taught me well on the art of whitetail hunting as well as life itself!  Bob and his lovely wife, Jan are both gone.  On one of our hunts together many years ago, Bob had to track a wounded Buck allowing this writer to learn from the master.  Bob had the misfortune of being completely color blind and not being able to discern the color red!  Tracking with utmost concentration, focus and the never give up attitude had been learned with success that day!

At full draw, the single pin was held at the desired elevation and with slight pressure the release was triggered!  Success!  The unmistakable sound of arrow penetrating body cavity with a high retreating leg kick and the quick digress of the animal as if a mountain lion was on his back indicated a successful shot!  After a full but tortuous two hour wait, my examination of the impact site began.  This is always done to determine the details provided even though his exit path was seen from my stand.  This examination proved difficult as no blood, hair or even discernable ground disturbance could be determined!  Finally, after many traveled concentric circles, following the seen exit path, my arrow was found approximately sixty yards distant with only a drop of blood!  Now my experience kicked in as knowing the terrain, previous trailing experience, and my gut feeling to travel as the wounded animal would travel pointed to certain possibilities.  The few drops of blood, although limited, provided a discernable travel pattern using splatter direction and terrain to guide my search.  As the follow up progressed, his stopping points and evasive tactics became evident.  Finally, as blood sign improved – the buck was found!  The shot was taken at 6:52 AM with location of his end found at Noon!

The expired animal was now in an area known as Jurassic Park, to use my description!  His removal would be difficult!  After my giving thanks routine, a slow tortuous drag was initiated up the steep hills and over ridge tops before accomplishment!   This feat would not have been initiated without the previous blessing from my Cardiologist that my heart was now strong and could be pushed to any limit desired.

Time with the animal in this regard provides a show of respect and admiration for his existence and by not allowing mechanized travel machines, side by sides or four wheelers on my property or use of any electronics in his pursuit made the experience near what generations of Indians before me would have experienced.   Practice with my bow at longer ranges proved invaluable and although this shot would be normal for newer Pseudo Archery tools, this was not my desire!  A prayer of thanks was directed to the heavens for this day and the assistance and training provided by my mentor, Bob Griffith!