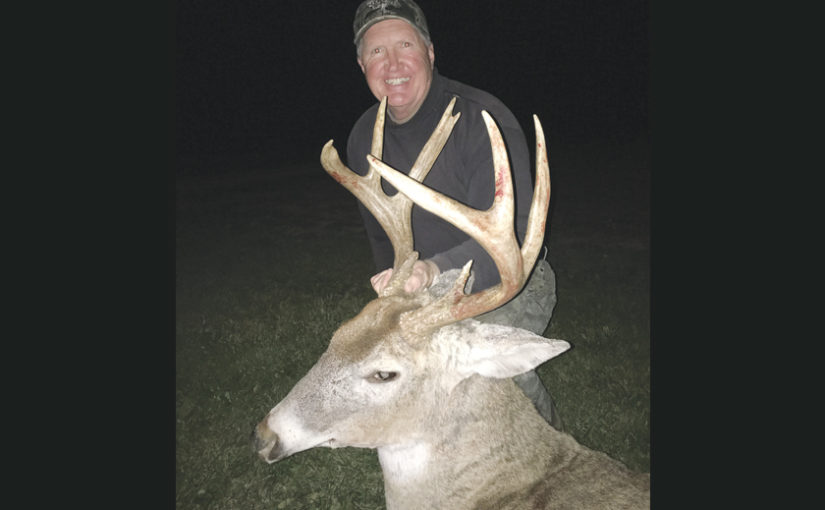 With nothing but air between the broadside bucks and me standing, with bow in hand, only twenty yards away, it was fulfillment of a dream often imagined!  My season had been a nightmare up to this point with everything going wrong mostly the fault in equipment but failure nonetheless.  My fortunes have now changed and the opportunity of a lifetime was now before me!

Driving down the gravel road with the sunrise light a reminder to get up earlier to be on stand at first opportunity burning in my gut, two black shapes not sixty yards distant to my left were instantly noticeable.  The cornfield had been recently shelled.  The objects could only be deer!  Why no attention to my close proximity?   In an instant, the realization of witnessing two bucks locked in combat was confirmed!  My luck had now changed and two large record buck ten pointers were handed to me in this field!

Veering off the road and grabbing my bow was instantaneous!  The phone was secured as well.  Although still in my Croc’s footwear, I did have a sweatshirt on but the cold temperature was noticed as I advanced toward the two pugilistic animals.  Many thoughts entered my mind at this moment and I am positive many thoughts were entering the minds of the two giant bucks!  They were only sixty yards from the gravel road in a dry open cornfield easily traversed with my truck to secure my prizes.

Their eyes watched me in terror as my approach closed the distance! At twenty yards, they attempted to evade by crabbing sideways although it appeared a conscious evasive measure, was it?   A deer probably does not equate my advance as their imminent demise but their instinct was on full display to either fight or flight both not available to them now!  Both appeared to be in full health and no hint of exhaustion or injury noticed.  How long intertwined?  My guess was not long.  Solid beams on both, with tines in the ten plus length on the upper end of their beams indicated mature dominant animals.  Both were intent on proving it!

It was an epiphany moment!  My dream was to see such an event and take advantage accordingly but now faced with the actual reality of the situation, I could not shoot the defenseless creatures!  My mind drifted to other individuals who produce great whitetails they have taken with less than sporting measures.  Surely, I would be able to reap the notoriety of taking these two deer but the decision was made to not do so, for I must live with my decision!  In fact, the phone was never pulled from my pocket as to do so would have ruined a pure moment in time.  A camera would have only spoiled this encounter!

A pickup truck was advancing down the gravel road and pulled off the road to park behind my vehicle as I watched the locked antagonists continue the fight.  I yelled to the occupant with the question.  “What do we do now?”  He yelled back –“I would not blame you if you did but personally I could not!”    I responded with the same response.  He said he could get a reciprocating saw if we could secure the animals.  I indicated these animals were still very powerful, exhibiting no sign of exhaustion.  We must wait until they are completely exhausted before such a rescue could be attempted!

Several minutes passed as the Bucks fought for their lives when suddenly they were free!  They exited in opposite directions for the timber but before disappearing both stopped to look back at either each other, the two men standing in the field, or both!  Both exhibited head gear still intact and with their strong movement, appeared to be in good health!   This predicament was now solved!

I introduced myself to the other individual whose name was Phillip.  He was from Georgia, hunting on a local farmer’s land