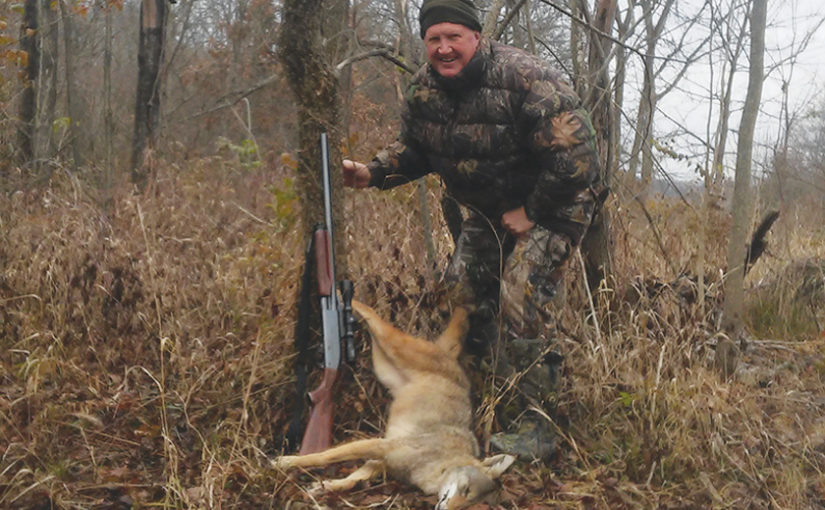 As the Fall Deer and Waterfall Seasons wind down to their ends, another outdoor activity possibility opening for the hunter is the pursuit of the wily coyote.  Most hunters already possess the weaponry and camouflage necessary for this action, no additional shopping is absolutely necessary.  A call or two may be needed to start the process but your old shotgun or rifle will work just fine to dispatch a willing coyote!

One may use store bought electronic calling devices along with decoys and other attractants but often only a mouth blown call will suffice!  Extreme extended cold snaps often put the normally well-fed dog on extended hunting forays with snow on the ground aiding your efforts work best.  A stomach empty of food tends to motivate the coyote to investigate that squealing rabbit sound as opposed to being well fed and not looking for a fight with his brethren over a minimal meal!

Most of us familiar with the whitetail environment have encountered the coyote and we are familiar with their wariness and stealth.  Controlling your scent dispersal by setting up in a calling location forcing the dog to approach from a neutral or upwind is best if possible.  A slight advantage can be gained from an elevated ground position forcing them to approach from the side or from the valley scenario can give one the advantage for a quick shot before their natural suspicion overrides their hunger.  Crossing an open environment may be a challenge for them if their eyes cannot confirm the source of the sound.

Listening for the sounds in the woods may also forewarn of their approach such as agitated squirrels, turkeys taking to the trees or Blue Jays sounding their alarm in the distance.  Being well hidden with a backdrop that doesn’t highlight your position is best.  For the heavily wooded areas a shotgun works best as the action can be in close quarters and quick!  The squeak of a mouse or the squealing rabbit distress sound works best but be patient as the old dog may investigate slowly and methodically weighing his options before coming closer.  If the approaching song dog cannot confirm with sight what his ears have heard – he is cautious.  Being in brush that necessitates his further approach works to your advantage as he expects the need to close the distance before confirmation of the sounds heard!  The Turkey and Coyote can pinpoint the location of a sound better than a laser guided missile – to borrow the advice from the late Ben Lee, “if you were to call from a hole in the ground a turkey would fly down and look in the hole!”  I am sure the same can be said for the approaching coyote!

Urban coyotes, like deer are more accustomed to the sights and sounds of the subdivision and are less wary of sights, scents and sounds he has encountered many times in the past and by stealing dog and cat food as well as other scraps may make them less hungry and motivated than the wild wood dog.  Territoriality type calls may work better in certain cases, but the local domestic house hounds may be vocal after hearing the howl of a coyote call!    An Urban Coyote will be harder to hunt than his brethren urban Turkeys, Deer and Waterfowl!

Don’t be discouraged when after a few set ups, your calling doesn’t produce the same results shown on the predator videos produced by the call makers.  Often the coyote may have approached but hesitated and remained unseen.  Attention to detail and persistence will yield results in the long run.  Use your knowledge of the whitetail woods to good use by hunting some of your well-known topography points to your advantage.  Start low and build volume and urgency into your calling routine and then pay attention as you have become the hunted and you are up against one of the best and persistent predators in the wild in the coyote!   The coyote may not sport a set of antlers nor leg band but may represent the ultimate hunting challenge!