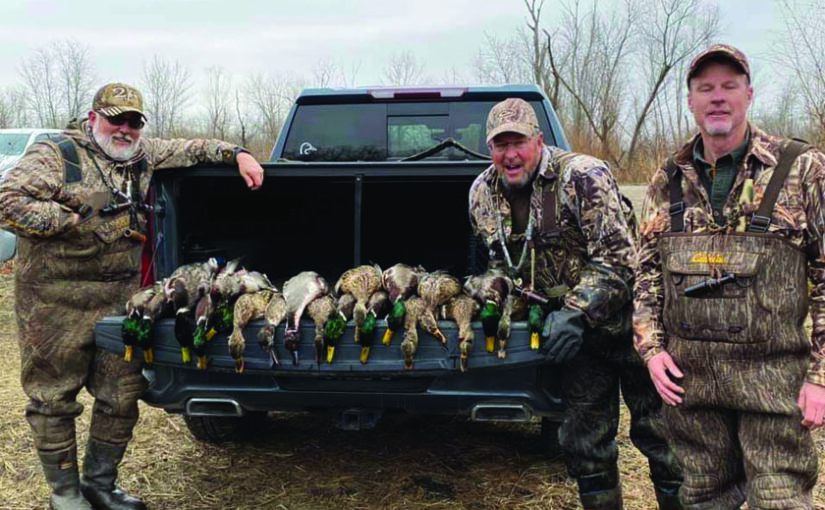 The Northern Wind rocked the pick-up truck slightly.  Stars peeked from the early morning dark sky intermittingly to interrupt the feeling of tiredness slightly mitigated by coffee intake!   The prospect of a potential successful Duck Hunt this morning kept the adrenaline pushing through the blood stream and motivating the writer to stay awake and alert for marauding deer on this roadway to the Duck Blind!  My arrival at the “Duck House” camp was on time to watch the seasoned group of men load their equipment as they have done thousands of times in the past!  This group of “Possums” according to Tony Cox, the silver bearded member not yet retired member of the group, could still make the grade despite our lengthening years of age, albeit slower but with calculated minimal physical strain!

As our group finished boarding the craft intended to transport us to our blind, it was realized we forgot the spotlight as it was left back at the house being charged.  No matter, Tony would use his headlamp to slowly illuminate the banks on our twisted and turning journey to the blind.  At an earlier age eyes would have functioned satisfactorily with no light needed!  We proceeded slowly to avoid mishap!  After disembarking the boat to our blind, JJ (Jeff Sykes) put out our electronic toys in the form of MoJo Ducks and Water Movement decoys to further enhance our decoy spread.  The well camouflaged blind was state of the art only slightly less comfortable than many of my living quarters over the years!

Although duck movement appeared constant it was orchestrated indicating patterned local ducks familiar with the danger of the box blind and decoy spread! As the morning progressed, smaller groups of mallards would take to flight and in the process of catching up to their comrades further along would stray too close to our blind giving us shot opportunities the seasoned hunter can make count!

Although occupying the strong side of the blind, my poor eyesight and even slower reflexes did not enhance my position, the other hunters covered the slack!  Tremendous shots were made by most and confidence grew, but as experienced hunters know, some decoying birds will win the lottery flying through the patterns peppering the sky as if protected by the divine! No matter, the stories of past experiences kept the group entertained even if the story had been told numerous times and had grown additional features omitted in earlier versions!  The “Lost Lens from the Hunters’ Glasses,” “Swimming for the boat in the Ohio” and the numerous “falling into the water” mishaps and setting the blind or hunter on fire by sitting too close to the propane heaters experienced in the history of hunting Sanganois came to mind!  Gossip is not limited to the female quilting groups and I can only hope my reasonably good name is kept intact in my absence!

Tony Cox prepared a scrumptious breakfast that defies normal description. A sort of Breakfast Burrito on steroids!  I have heard it said, “When performing the autopsy, they will not have to dig too far to discover the cause of death” and this breakfast may be applicable!  It would definitely not qualify for the Vegan Cook Book!

Good Shooting and Successful Calling coupled with great comradery in the blind made for a hunt worth remembering and with a strong brace of mallards to show for our efforts and a good photo opportunity as well!

If my entering into heaven is open for negotiation, hopefully in the far future, I may not bring up the members of this group for character witnesses, but I will always be quick to join them in the duck blind or goose pit while on earth!

PS – The Waterfowl community has recently lost one of its own in the recent passing of Dave Evans.  Dave, a retired English Teacher at Pekin High School was an avid outdoorsman both in his fishing and hunting adventures.  He was known as the “Atticus Finch” of teachers for both his style and character.  A lifelong member and contributor to Ducks Unlimited, he loved the sport of Duck Hunting and Fishing.   He spent each summer at his cabin in Minnesota fishing and his fall and winter hunting waterfowl when possible.   We were both insomniacs by nature and many early mornings were spent in company of each other at our Duck Club Lodge (The Red Nose Duck Club) while drinking coffee.He gave ASO Magazine credence with his monthly stories and tales of the outdoors.  He provided a great confidence booster to my very common literary skills when he told me that my tale, “The Legend of Ol’ Tom” was of his liking!  Rest in Peace my friend!