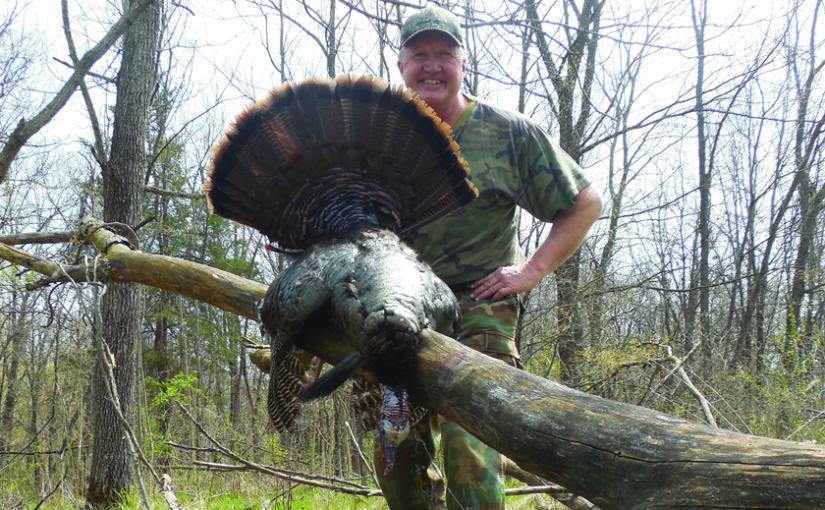 The pressures of life often seem impossible to overcome when it comes to family and career but one passion that will make one forget about any other problems is the pursuit of the spring Turkey Gobbler!  Early in my career, my job included Repossessing vehicles.  This endeavor provided many interesting and unique encounters with customers and many stories come to mind when fulfilling that portion of my early career!  Often those stories, now humorous or heartbreaking may have not been so when actually performing the service of taking some of those vehicles!  Turkey Hunting is the same in that the story is often funny or awe inspiring, but the actual hunt may have been much more difficult!  This is the beauty of the spring Turkey Hunt.  It will take you away from the reality of life for a small time giving you a more focused worry in trying to outwit the Eastern Turkey Gobbler!

Many years ago, while leaning against the Red Oak awaiting the first rays of morning sunshine, the feeling of being rained on was evident.  Knowing no rain was in the forecast and the stars were shining brightly made the moisture an enigma!  As the light progressed that morning, a much more substantial substance rained from above – it finally became evident that a Turkey Roosting above my sitting position was depositing his bowels on yours truly!  Bad Luck usually follows my whereabouts on a daily basis but starting a turkey hunt by being defecated on was a bad omen!

Once while getting positioned in my tree stand for long sit awaiting the arrival of the monster Buck of my dreams, the light tree calls in very close proximity signified an opportunity for a turkey! Despite the straining to locate the source of these calls, the soft-spoken turkey could not be identified.  His fly down startled to the point of consternation – he was in the same tree!  Confidence in one’s hunting abilities was not enhanced with this encounter!

Back in 1997, on the last weekend of the spring turkey season in Illinois about to chalk my first spring gun season hunt as a total bust, a gobble sounded numerous times getting closer to my location.  The hen, curious of the interlopers’ peculiar calling, brought a long beard within shooting range of my hiding spot and my shot was true!  The run to the flopping bird was quicker than an Olympic sprinter off the line after the starter gun had sounded!  New and naïve to this sport, the bird was grabbed around the neck and hoisted aloft for the purpose of admiration and celebration!  The still kicking bird left a strange sensation in my left arm – he was deposited to the ground in a hurry to finish his death throes!  Quickly lifting the sleeve of the old army fatigue jacket revealed a long red line of nearly opened flesh!   To be done in by a turkey is not a good sign – the true purpose of the old bronze backs spurs was learned the hard way to say the least!

More than once, sleep has overcome my enthusiasm for the morning while leaning against my tree in my favorite hunting spot!  Coming out of my slumber has revealed more heads in my decoys than the number of decoys displayed, or a red head is noticed within gun range trying to discern what is going on!  More times than not the turkey makes a successful getaway and is smarter for the experience unlike the slumbering hunter!

Preferring to hunt in the open elements without the use of a blind or other hiding apparatus is the goal as the hunter must remain vigilant and stone still to avoid detection from the approaching bird. Often thwarted by using this manner, the thrill of overcoming a bird’s natural wariness and instinct with success produces a thrill not experienced in any other manner. To say turkey hunting sharpens one’s focus and woods acuity is an understatement. The spring gobbler in full strut as he approaches your set – up with the sun illuminating the unmatched beauty of his feathered tapestry and blood enriched waddles coupled with the sound of his wing feathers dragging the ground as he lets out the most tremendous sound in the woods, his booming gobble, is unmatched in the outdoors!

As we approach another spring with Mr. Turkey in mind, be grateful for the renewal and inspiration the season brings but be prepared for the chaos he can create as well!