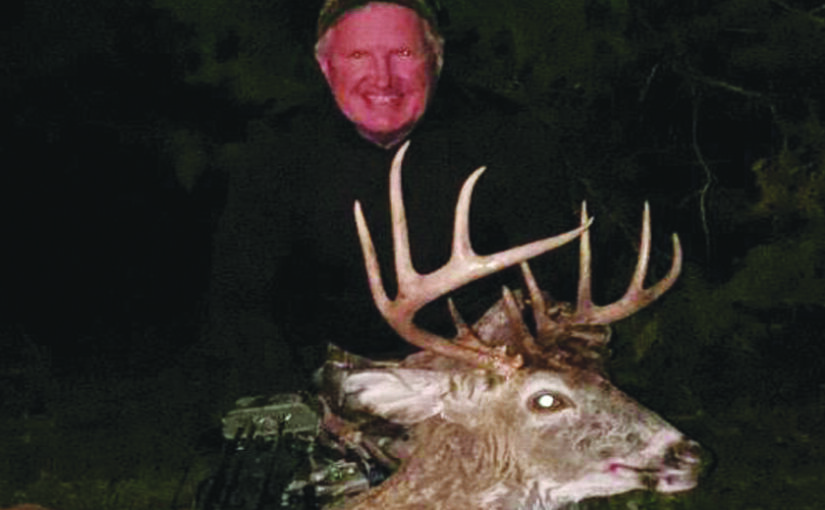 My legs shook like a ghost had appeared before me!  This feeling, fueled by the weakening of the adrenaline rush and excitement of the few moments just past was palpable!  Daylight was waning and the descent/packing procedure would take another seven minutes to complete from my position in the Red Oak!  Everything felt and looked good, but heartache had followed such feelings of euphoria in the Woods in the past!

As if living in a time warp, this manner of activity was becoming obsolete.  Relying on visual and historical knowledge of the terrain, activity periods and crop changes on this farm acquired over a generation brought this moment to bear!  The next few minutes of activity involved in my return to the earth’s surface allowed the next worry to enter my noggin.  Was the arrows path true?  What could have been done better?  An arrows flight at a ten-yard walking animal is different than at a twenty-yard walking animal!  Mouth grunting a mature animal at close range, especially one already alert to danger is precarious but somewhat mitigated at twenty yards due to distance?  Probably he should have been halted at the distance of the shot as the crunchy floor of the wooded ravine would have muffled my utterance!

The act had been done.  Now the after portion of the activity was needed to access the result.  The climber was left packed leaning against the tree to use as a reference point looking back from the arrows point of impact if needed.  Despite my recall of the sequence of events and travel of the target post shot – the arrow could not be found, and the actual impact site was not discernable as no sign was evident.  The sinking feeling of despair began to creep into my psyche as darkness began to envelope the woods!

Confidence overrode patience, pressing on.  The path of the animal was almost identical to my prediction on a set up on another stand situated at field and wooded ravine edge looking forward.  As the distance from impact progressed with little sign, doubt entered the mind especially in a clean environment where one could see ahead distinctly.  Looking ahead and over a downed tree trunk, a distinct dark object was evident.  Was it another downed limb?  A small patch of white from his tail confirmed success!  This is the moment I live for in the woods!  Little manner of advantage was used against this marvelous creature!  He had been hunted not collected by technology!

To learn from this event and to retrieve my climber and possible arrow, following back the line of travel began but darkness was now upon the woods.  The arrow could be found later.  As profound darkness progressed, the woods were mine alone for miles distant – I would honor the success with only physical ability in his retrieval, not with mechanical assistance, from a near sixty-five-year-old body!

My twenty-year-old climber is now obsolete as deer patterns, ranking in size and desire, time of travel can be discerned from electronic means allow more permanent stand placement with confidence!  Pseudo shooting weapons allowed during archery season with telescopic sights and use of shooting sticks or bench rest from elevated weather neutral Condo “Blinds” are now the norm!  My neighboring hunters make fun of my generational, old school, handicapped manner of Whitetail activity!

Exiting the area, with my animal lying in the bed of my pick-up, the sight of the three mounds barely visible in the moonlight at the crest of the hill overlooking the river valley cause my apologies to those Indians buried there as my use of the compound bow, albeit old, climber and travel with use of the internal combustion engine are a definite advantage over their means of success over thousands of generations!

One of my neighbors while making fun of my old ways inadvertently gave an unintended compliment as he exclaimed, “Herschelman, you have been hunting these woods for thirty years and you always get a Buck”.  While this may be an over exaggeration it reminded me that despite their use of better technologies, it will be years before they may be able to match my success!  Just as I may never be able to match the success of those buried in the hills before me!

It is my hope; my legs will always shake in the future after a shot on a Whitetail.  The arrow was found the next day and examination of the events was now complete.  It would have been easier if the arrow had a lighted nock!